Soap is a salt of a fatty acid[1] used in a variety of cleansing and lubricating products. In a domestic setting, soaps are surfactants usually used for washing, bathing, and other types of housekeeping. In industrial settings, soaps are used as thickeners, components of some lubricants, and precursors to catalysts.

When used for cleaning, soap solubilizes particles and grime, which can then be separated from the article being cleaned. In hand washing, as a surfactant, when lathered with a little water, soap kills microorganisms by disorganizing their membrane lipid bilayer and denaturing their proteins. It also emulsifies oils, enabling them to be carried away by running water.[2]

Industrially manufactured bar soaps became available in the late 18th century, as advertising campaigns in Europe and America promoted popular awareness of the relationship between cleanliness and health.[35] In modern times, the use of soap has become commonplace in industrialized nations due to a better understanding of the role of hygiene in reducing the population size of pathogenic microorganisms (Figure \(\PageIndex{1}\)). Soap Making: Fat Plus Lye Forms a Soap Plus Glycerol

The earliest recorded evidence of the production of soap-like materials dates back to around 2800 BC in ancient Babylon.[10] A formula for soap consisting of water, alkali, and cassia oil was written on a Babylonian clay tablet around 2200 BC.[11]

The Ebers papyrus (Egypt, 1550 BC) indicates the ancient Egyptians bathed regularly and combined animal and vegetable oils with alkaline salts to create a soap-like substance. Egyptian documents mention a similar substance was used in the preparation of wool for weaving.[12]In the reign of Nabonidus (556–539 BC), a recipe for soap consisted of uhulu [ashes], cypress [oil] and sesame [seed oil] "for washing the stones for the servant girls".[13]In ancient Israel, the ashes from barilla plants, such as species of Salsola, saltwort (Seidlitzia rosmarinus) and Anabasis, were used in soap production, known as potash Until the Industrial Revolution, soapmaking was conducted on a small scale and the product was rough. In 1780, James Keir established a chemical works at Tipton, for the manufacture of alkali from the sulfates of potash and soda, to which he afterwards added a soap manufactory. William Gossage produced low-priced, good-quality soap from the 1850s. Robert Spear Hudson began manufacturing a soap powder in 1837, initially by grinding the soap with a mortar and pestle. American manufacturer Benjamin T. Babbitt introduced marketing innovations that included sale of bar soap and distribution of product samples. William Hesketh Lever and his brother, James, bought a small soap works in Warrington in 1886 and founded what is still one of the largest soap businesses, formerly called Lever Brothers and now called Unilever. These soap businesses were among the first to employ large-scale advertising campaigns. A poster advertising is shown in Figure \(\PageIndex{2}\).

Liquid soap was not invented until the nineteenth century; in 1865, William Shepphard patented a liquid version of soap.[40] In 1898, B.J. Johnson developed a soap derived from palm and olive oils; his company, the B.J. Johnson Soap Company, introduced "Palmolive" brand soap that same year.[41] This new brand of soap became popular rapidly, and to such a degree that B.J. Johnson Soap Company changed its name to Palmolive.[42]

The cleansing action of soap is determined by its polar and non-polar structures in conjunction with an application of solubility principles. The long hydrocarbon chain is of course non-polar and hydrophobic (repelled by water). The "salt" end of the soap molecule is ionic and hydrophilic (water soluble). Examples of soap and detergent molecules, are shown in Figure \(\PageIndex{4}\). The use of such compounds as cleaning agents is facilitated by their surfactant character, which lowers the surface tension of water, allowing it to penetrate and wet a variety of materials.

When soap is added to water, the ionic-salt end of the molecule is attracted to water and dissolved in it. The non-polar hydrocarbon end of the soap molecule is repelled by water. A drop or two of soap in water forms a monolayer (Figure \(\PageIndex{5}\)) on the water surface as shown in the graphics on the left. The soap molecules "stand up" on the surface as the polar carboxyl salt end is attracted to the polar water. The non-polar hydrocarbon tails are repelled by the water, which makes them appear to stand up.

Soap vs. oil vs. water

Water alone is not able to penetrate grease or oil because they are of opposite polarity. When grease or oil (non-polar hydrocarbons) are mixed with a soap- water solution, the soap molecules work as a "bridge" between polar water molecules and non-polar oil molecules. Soap molecules have both properties of non-polar and polar at opposite ends of the molecule.

The oil is a pure hydrocarbon so it is non-polar. The non-polar hydrocarbon tail of the soap dissolves into the oil. That leaves the polar carboxylate ion of the soap molecules are sticking out of the oil droplets, the surface of each oil droplet is negatively charged. As a result, the oil droplets repel each other and remain suspended in solution (this is called an emulsion) to be washed away by a stream of water. The outside of the droplet is also coated with a layer of water molecules.

The graphic on Figure \(\PageIndex{6}\) although not strictly a representation of the above description is a micelle that works in much the same fashion. The oil would be a the center of the micelle.

Figure \(\PageIndex{6}\) A micelle with oil at the center.

Disadvantages and Advantages of Soap

The importance of soap to human civilization is documented by history, but some problems associated with its use have been recognized. One of these is caused by the weak acidity (pKa ca. 4.9) of the fatty acids. Solutions of alkali metal soaps are slightly alkaline (pH 8 to 9) due to hydrolysis. If the pH of a soap solution is lowered by acidic contaminants, insoluble fatty acids precipitate and form a scum. A second problem is caused by the presence of calcium and magnesium salts in the water supply (hard water). These divalent cations cause aggregation of the micelles, which then deposit as a dirty scum.

In the reaction below, the sodium cation in soap is replaced by calcium to form calcium stearate. The white precipitate, also termed as soap scum could form deposits on surfaces and inside plumbing.

Soap is still widely popular product as it is a low cost, readily available product used for personal hygiene and cleanliness. Use of soap doesn't lead to pollution. Soap is biodegradable as it can be broken down by microorganisms found in sewage.

Can Soap Really Kill the Coronavirus ?

Water softening is the removal of calcium, magnesium, and certain other metal cations in hard water. The resulting soft water requires less soap for the same cleaning effort, as soap is not wasted bonding with calcium ions. Soft water also extends the lifetime of plumbing by reducing or eliminating scale build-up in pipes and fittings. Water softening is usually achieved using lime softening or ion-exchange resins (see Figure \(\PageIndex{7}\)) but is increasingly being accomplished using nanofiltration or reverse osmosis membranes. 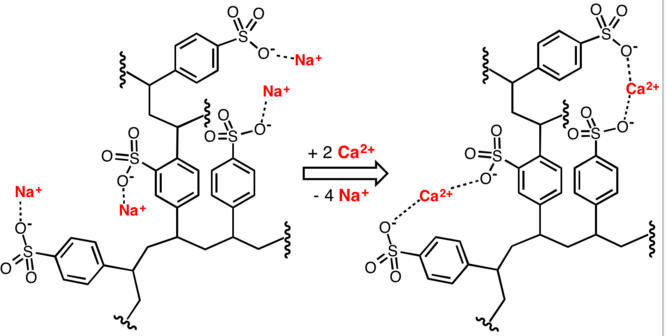 How to soften hard water

Some wish to soften hard water to control its irritating, and in many cases damaging, effects. The diminished ability of soap to lather is not only annoying, but can also be potentially harmful economically. Businesses that depend on the foaming of soap, such as car washes and pet groomers, may wish to soften hard water to avoid excessive use of soap due to a decreased ability to lather. Likewise, it is often necessary to soften water that comes into contact with pipes to avoid the destructive and compromising build-up of deposits. Also, many people may find the calcifying effects that hard water has on faucets and other items unfavorable and choose to soften the water to prevent such mineral deposits from forming. Still others may dislike the sticky, dry feeling left by the precipitation of soap scum onto the skin. Whatever the reasons, there are many processes available to soften hard water.

One way to soften water is through a process called ion exchange. During ion exchange, the unwanted ions are "exchanged" for more acceptable ions. In many cases, it is desirable to replace the hard water ions, such as Ca2+ and Mg2+, with more agreeable ions, like that of Na+. To do this, the hard water is conducted through a zeolite or resin-containing column, which binds the unwanted ions to its surface and releases the more tolerable ions. In this process, the hard water ions become "fixed" ions because of their attachment to the resin material. These fixed ions displace the desirable ions (Na+), now referred to as counterions, from the column, thus exchanging the ions in the water. This process is illustrated in Figure \(\PageIndex{8}\).

Unfortunately, this process has the disadvantage of increasing the sodium content of drinking water, which could be potentially hazardous to the health of people with sodium-restricted diets.

Another process is called lime softening. In this process, the compound calcium hydroxide, Ca(OH)2, is added to the hard water. The calcium hydroxide, or "slaked lime," raises the pH of the water and causes the calcium and magnesium to precipitate into CaCO3 and Mg(OH)2. These precipitates can then be easily filtered out due to their insolubility in water, shown below by the small solubility constant of magnesium hydroxide (the solubility product constant for calcium carbonate is shown above). After precipitation and removal of the offending ions, acid is added to bring the pH of the water back to normal.

Chelating agents can also be used to soften hard water. Polydentate ligands, such as the popular hexadentate ligand EDTA, bind the undesirable ions in hard water. These ligands are especially helpful in binding the magnesium and calcium cations, which as already mentioned are highly prevalent in hard water solutions. The chelating agent forms a very stable ring complex with the metal cations, which prevents them from interacting with any other substances that may be introduced to the solution, such as soap. In this way, chelators are able to diminish the negative effects associated with hard water. A simplified equation representing the chelation of the metal calcium cation (Ca2+) with the hexadentate ligand EDTA is shown below. The large value of the formation constant (Kf) reflects the tendency of the reaction to proceed to completion in the forward direction.

The final process, reverse osmosis, uses high pressures to force the water through a semipermeable membrane. This membrane is generally intended to be impermeable to anything other than water. The membrane serves to filter out the larger ions and molecules responsible for the water's hardness, resulting in softened water. During this process, the water is forced from an area with a high concentration of solute in the form of dissolved metal ions and similar compounds, to an area that is very low in the concentration of these substances. In other words, the water moves from a state of hardness to a softer composition as the ions causing the water's hardness are prevented passage through the membrane. Reverse Osmosis does have a disadvantage of wasting wastewater compared to other water treatment methods. This process is shown in Figure \(\PageIndex{9}\) below. Note that this figure describes the desalination of salt water. However, the process for softening hard water is the same.