Muscle cells are specialized for contraction. Muscles allow for motions such as walking, and they also facilitate bodily processes such as respiration and digestion. The body contains three types of muscle tissue: skeletal muscle, cardiac muscle, and smooth muscle (Figure \(\PageIndex{1}\)).

Skeletal muscle tissue forms skeletal muscles, which attach to bones or skin and control locomotion and any movement that can be consciously controlled. Because it can be controlled by thought, skeletal muscle is also called voluntary muscle.  Smooth muscle tissue occurs in the walls of hollow organs such as the intestines, stomach, and urinary bladder, and around passages such as the respiratory tract and blood vessels.   Cardiac muscle tissue is only found in the heart, and cardiac contractions pump blood throughout the body and maintain blood pressure.

Figure \(\PageIndex{1}\) The body contains three types of muscle tissue: skeletal muscle, smooth muscle, and cardiac muscle, visualized here using light microscopy. Smooth muscle cells are short, tapered at each end, and have only one plump nucleus in each. Cardiac muscle cells are branched and striated, but short. The cytoplasm may branch, and they have one nucleus in the center of the cell. (credit: modification of work by NCI, NIH; scale-bar data from Matt Russell) 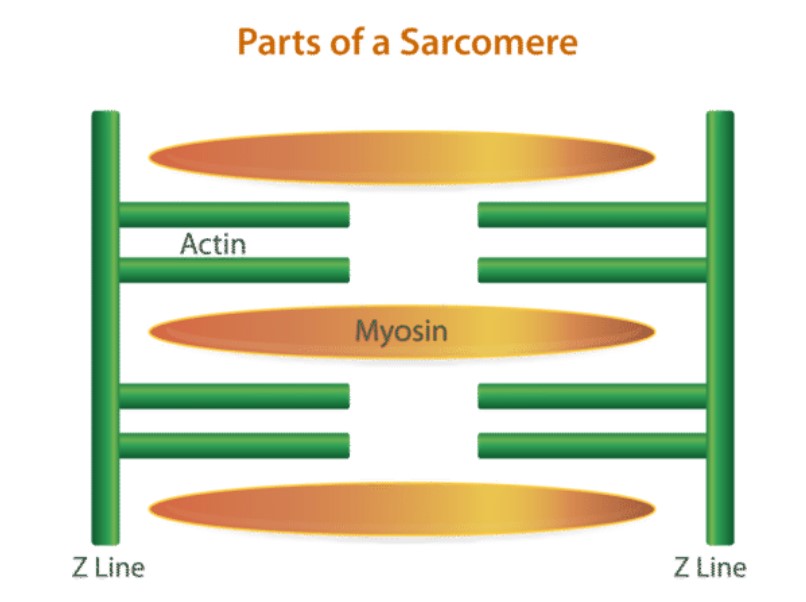 When all of the sarcomeres in a muscle fiber shorten, the fiber contracts. A muscle fiber either contracts fully or it doesn’t contract at all. The number of fibers that contract determines the strength of the muscular force. When more fibers contract at the same time, the force is greater.

Muscles cannot contract on their own. They need a stimulus from a nerve cell to “tell” them to contract. Let’s say you decide to raise your hand in class. Your brain sends electrical messages to nerve cells, called motor neurons, in your arm and shoulder. The motor neurons, in turn, stimulate muscle fibers in your arm and shoulder to contract, causing your arm to rise. Involuntary contractions of cardiac and smooth muscles are also controlled by nerves.

The source of energy that is used to power the movement of contraction in working muscles is adenosine triphosphate (ATP) – the body’s biochemical way to store and transport energy. ATP provides the energy for cross-bridge formation and filament sliding.  However, ATP is not stored to a great extent in cells. 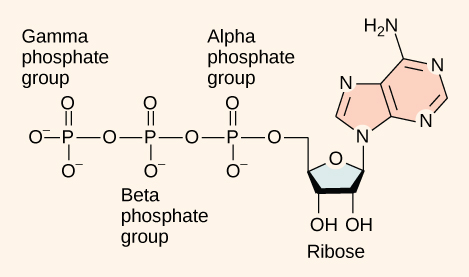 All muscle cells have a little ATP within them that they can use immediately – but only enough to last for about 3 seconds!

So once muscle contraction starts, the making of more ATP must start quickly. Since ATP is so important, the muscle cells have several different ways to make it. These systems work together in phases. The three biochemical systems for producing ATP are, in order:

Aerobic respiration takes even more chemical reactions to produce ATP than either of the above two systems. It is the slowest of all three systems – but it can supply ATP for several hours or longer, as long as the supply of fuel lasts.

Aerobic exercise (also known as cardio) is physical exercise of low to high intensity that depends primarily on the aerobic energy-generating process. Aerobic literally means "relating to, involving, or requiring free oxygen", and refers to the use of oxygen to adequately meet energy demands during exercise. Generally, light-to-moderate intensity activities that are sufficiently supported by aerobic metabolism can be performed for extended periods of time. When practiced in this way, examples of cardiovascular/aerobic exercise are medium to long distance running/jogging, swimming, cycling, and walking, according to the first extensive research on aerobic exercise, conducted in the 1960s on over 5,000 U.S. Air Force personnel by Dr. Kenneth H. Cooper. Kenneth Cooper was the first person to introduce the concept of aerobic exercise. In the 1960s, Cooper started research into preventive medicine. He became intrigued by the belief that exercise can preserve one's health. In 1970 he created his own institute (the Cooper Institute) for non-profit research and education devoted to preventive medicine. He sparked millions into becoming active and is now known as the "father of aerobics".

What is generally called aerobic exercise might be better termed "solely aerobic", because it is designed to be low-intensity enough not to generate lactate (or lactic acid), so that all carbohydrate is aerobically turned into energy.

Initially during increased exertion, muscle glycogen is broken down to produce glucose, which undergoes glycolysis producing pyruvate (Figure \(\PageIndex{4}\)) which then reacts with oxygen(Krebs cycle, Chemiosmosis) to produce carbon dioxide and water and releases energy.  As glycogen levels in the muscle begin to fall, glucose is released into the bloodstream by the liver, and fat metabolism is increased so that it can fuel the aerobic pathways. Aerobic exercise may be fueled by glycogen reserves, fat reserves, or a combination of both, depending on the intensity.

Aerobic exercise comprises innumerable forms. In general, it is performed at a moderate level of intensity over a relatively long period of time. For example, running a long distance at a moderate pace is an aerobic exercise, but sprinting is not. Playing singles tennis, with near-continuous motion, is generally considered aerobic activity, while golf or two person team tennis, with brief bursts of activity punctuated by more frequent breaks, may not be predominantly aerobic. Some sports are thus inherently "aerobic", while other aerobic exercises, such as fartlek training or aerobic dance classes, are designed specifically to improve aerobic capacity and fitness. It is most common for aerobic exercises to involve the leg muscles, primarily or exclusively. There are some exceptions. For example, rowing to distances of 2,000 m or more is an aerobic sport that exercises several major muscle groups, including those of the legs, abdominals, chest, and arms. Common kettlebell exercises combine aerobic and anaerobic aspects.

Figure \(\PageIndex{4}\) Glycolysis breaks the 6-carbon molecule glucose into two 3-carbon pyruvate molecules, releasing some of the chemical energy which had been stored in glucose.

The by-product of anaerobic glycolysis—lactate—has traditionally been thought to be detrimental to muscle function.[13] However, this appears likely only when lactate levels are very high. Elevated lactate levels are only one of many changes that occur within and around muscle cells during intense exercise that can lead to fatigue. Fatigue, that is muscle failure, is a complex subject that depends on more than just changes to lactate concentration. Energy availability, oxygen delivery, perception to pain, and other psychological factors all contribute to muscular fatigue. Elevated muscle and blood lactate concentrations are a natural consequence of any physical exertion. The effectiveness of anaerobic activity can be improved through training.[14]

Lactic acid can be converted back to pyruvate in well-oxygenated muscle cells; however, during exercise the focus in on maintaining muscle activity. Lactic acid is transported to the liver where it can be stored prior to conversion to glucose in the presence of oxygen via the Cori Cycle. The amount of oxygen required to restore the lactic acid balance is often referred to as the oxygen debt.

Overview of Anaerobic and Aerobic Metabolism Different forms of exercise use different systems to produce ATP

A sprinter is getting ATP in a very different way to a marathon runner.

The fuel sources for anaerobic and aerobic metabolism will change depending on the amount of nutrients available and the type of metabolism. Glucose may come from blood glucose (which is from dietary carbohydrates or liver glycogen and glucose synthesis) or muscle glycogen. Glucose is the primary energy source for both anaerobic and aerobic metabolism. Fatty acids are stored as triglycerides in muscles but about 90% of stored energy is found in adipose tissue. As low to moderate intensity exercise continues using aerobic metabolism, fatty acids become the predominant fuel source for the exercising muscles. Although protein is not considered a major energy source, small amounts of amino acids are used while resting or doing an activity. The amount of amino acids used for energy metabolism increase if the total energy intake from your diet does not meet the nutrient needs or if you are involved in long endurance exercises. Physical Activity Intensity and Fuel Use

The exercise intensity determines the contribution of the type of fuel source used for ATP production(see Figure \(\PageIndex{8}\)). Both anaerobic and aerobic metabolism combine during exercise to ensure that the muscles are equipped with enough ATP to carry out the demands placed on them. The amount of contribution from each type of metabolism will depend on the intensity of an activity. When low-intensity activities are performed, aerobic metabolism is used to supply enough ATP to muscles. However, during high-intensity activities more ATP is needed so the muscles must rely on both anaerobic and aerobic metabolism to meet the body’s demands. 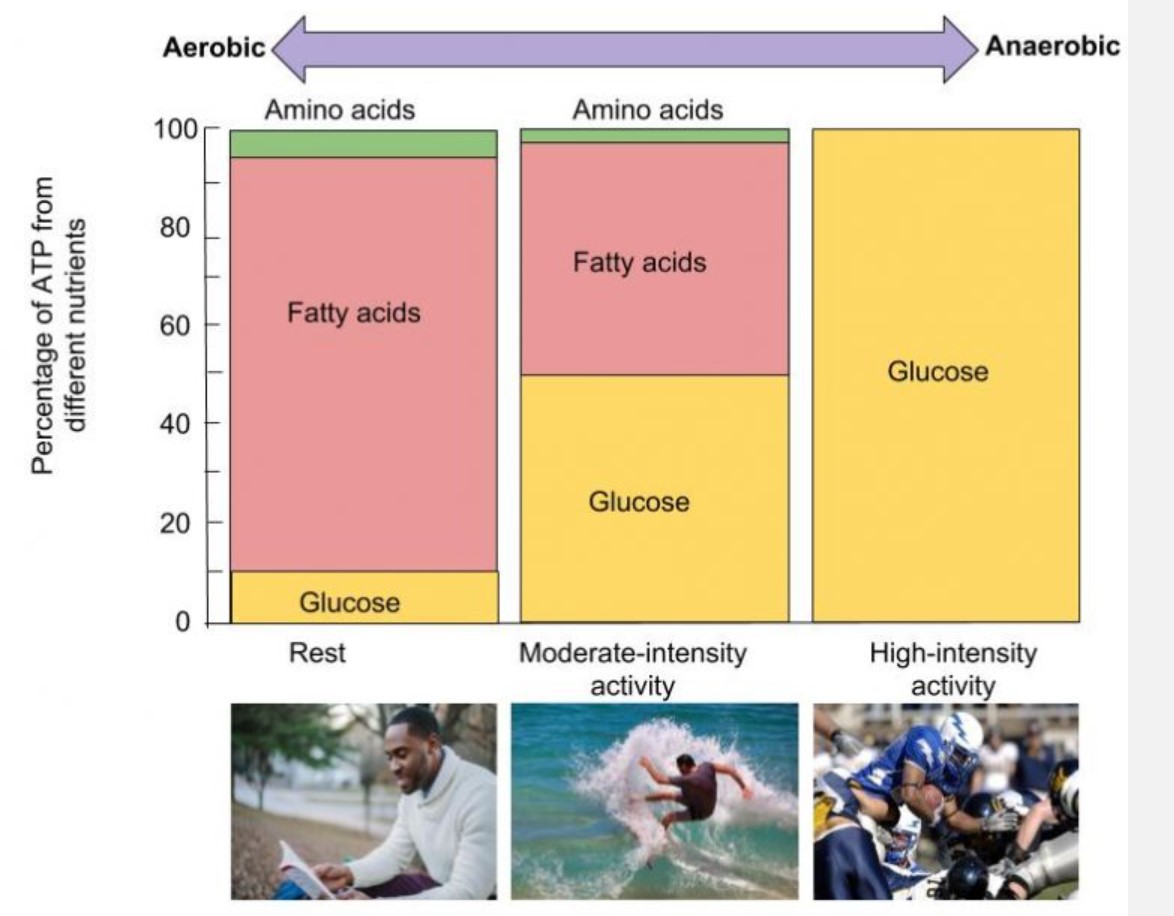 Figure \(\PageIndex{8}\): The Effect of Exercise Intensity on Fuel Sources.