The arrow in the photo below is pointing to a star that doesn't look like much compared with some of the other stars in the picture. It's certainly much smaller than most other stars. In fact, it's only about 20 kilometers in diameter. Compare that with the 1.4-million-kilometer diameter of our own sun. Despite its small size, however, this star has greater mass than the sun, making it incredibly dense. It also has tremendous gravity. In fact, gravity on its surface is about \(2 \times 10^{11}\) times the gravity we feel on Earth!. What type of star is it? It's called a neutron star. That's because it consists solely of neutrons. What is a Neutron?

A neutron is one of three main particles that make up the atom. The other two particles are the proton and electron. Atoms of all elements—except for most atoms of hydrogen—have neutrons in their nucleus. The nucleus is the small, dense region at the center of an atom where protons are also found. Atoms generally have about the same number of neutrons as protons. For example, all carbon atoms have six protons and most also have six neutrons. A model of a carbon atom is shown in the figure below. 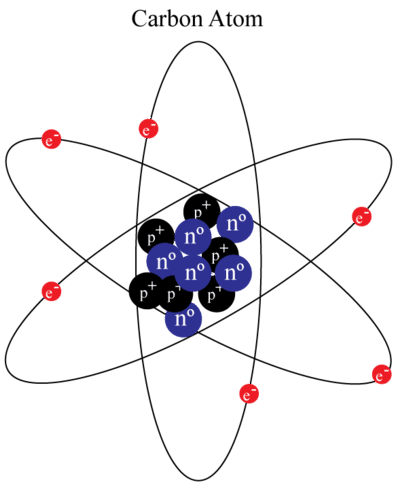 Unlike protons and electrons, which are electrically charged, neutrons have no charge. In other words, they are electrically neutral. That's why the neutrons in the diagram above are labeled \(n^0\). The zero stands for "zero charge". The mass of a neutron is slightly greater than the mass of a proton, which is 1 atomic mass unit \(\left( \text{amu} \right)\). (An atomic mass unit equals about \(1.67 \times 10^{-27}\) kilograms.) A neutron also has about the same diameter as a proton, or \(1.7 \times 10^{-15}\) meters.

All the atoms of a given element have the same number of protons and electrons. The number of neutrons, however, may vary for atoms of the same element. For example, almost 99 percent of carbon atoms have six neutrons, but the rest have either seven or eight neutrons. Atoms of an element that differ in their numbers of neutrons are called isotopes. The nuclei of these isotopes of carbon are shown in the figure below. The isotope called carbon-14 is used to find the ages of fossils. Neutrons consist of fundamental particles known as quarks and gluons. Each neutron contains three quarks. Two of the quarks are called down quarks, and the third quark is called an up quark. Gluons are fundamental particles that are given off or absorbed by quarks. They carry the strong nuclear force that holds quarks together in a neutron.

A neutron is one of three main particles that make up the atom. It is found in the nucleus and is neutral in electric charge. It has about the same mass and diameter as a proton. Neutrons are found in all atoms except for most atoms of hydrogen. All the atoms of a given element have the same number of protons and electrons, but they may vary in their numbers of neutrons. Atoms of the same element that differ in their numbers of neutrons are called isotopes. Neutrons consist of fundamental particles known as quarks and gluons. Gluons carry the strong nuclear force that binds the together the quarks in a neutron.

Read the article on neutrons at the following URL, and then complete the statements below.