How long is a yard? It depends on whom you ask and when you asked the question. Today we have a standard definition of the yard, which you can see marked on every football field. If you move the ball ten yards, you get a first down and it doesn't matter whether you are playing in Los Angeles, Dallas, or Green Bay. But at one time that yard was arbitrarily defined as the distance from the tip of the king's nose to the end of his outstretched hand. Of course, the problem there is simple: new king, new distance (and then you have to remark all those football fields).

All measurements depend on the use of units that are well known and understood. The English system of measurement units (inches, feet, ounces, etc.) are not used in science because of the difficulty in converting from one unit to another. The metric system is used because all metric units are based on multiples of 10, making conversions very simple. The metric system was originally established in France in 1795. The International System of Units is a system of measurement based on the metric system. The acronym SI is commonly used to refer to this system and stands for the French term, Le Système International d'Unités. The SI was adopted by international agreement in 1960 and is composed of seven base units in Table \(\PageIndex{1}\).

The first units are frequently encountered in chemistry. All other measurement quantities, such as volume, force, and energy, can be derived from these seven base units.

The map below shows the adoption of the SI units in countries around the world. The United States has legally adopted the metric system for measurements, but does not use it in everyday practice. Great Britain and much of Canada use a combination of metric and imperial units. 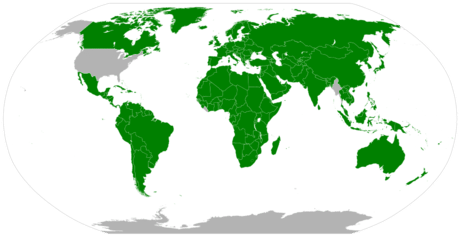 The SI system is based on multiples of ten. There are seven basic units in the SI system. Five of these units are commonly used in chemistry.