The mechanism of a reaction is a sequence of elementary steps proceeding from the starting materials through a series of intermediates and eventually to the products. Each step has an activation energy barrier. Each intermediate has some measure of stability. The energy changes along a reaction pathway can be tracked with a reaction progress diagram.

The speed of a reaction can be altered by flooding the system with reactant (via the Le Chatelier's Principle) or by adding more (thermal) energy to help overcome the barrier (via the Arrhenius equation), but the reaction follows this same energy pathway. However, this is not the case with a catalyst. A catalyst introduces a completely different pathway/mechanism that was inaccessible before.

Some reactions simply cannot proceed without a catalyst; the energy barrier is too high. This may be true even if the overall reaction is exergonic (\(\Delta{G}\)) and thus thermodynamically favored to proceed. 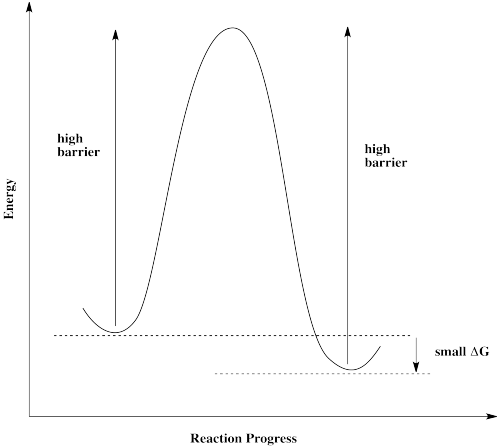 Consider the reaction progress diagram above. If reactants approach this barrier from the left, they encounter a very large energy barrier. They cannot react, despite the fact that it would be energetically favorable for them to convert to products. The molecules are stuck. The same is true if molecules approach from the right. They cannot overcome the high barrier, though the energy difference between the left and the right is small. The molecules are again stuck. 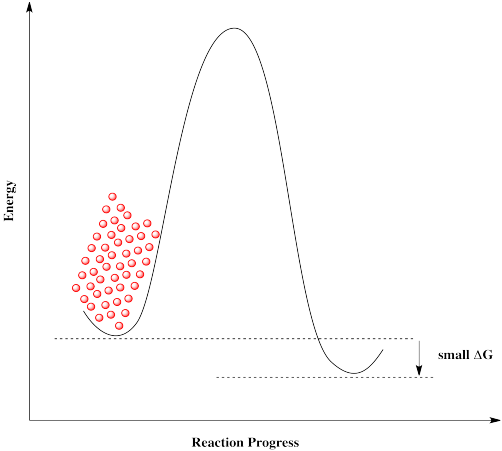 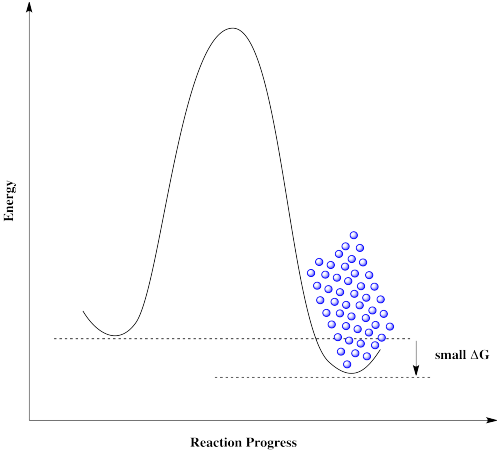 If the barrier were removed, the molecules could react freely in both directions, eventually coming to a dynamic equilibrium, as in the diagram below: 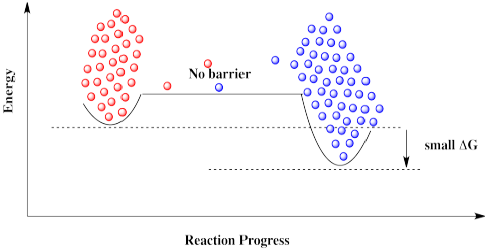 A catalyst does not fully remove the barrier, but it offers a new pathway with a lower barrier. The reaction is able to proceed back and forth. 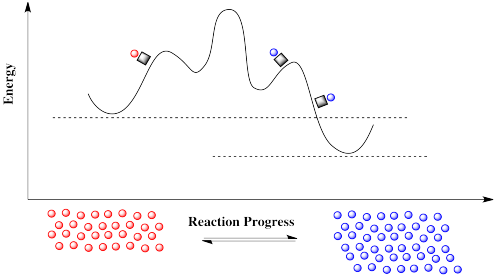 The reaction progress diagram plots the changes in energy along one particular coordinate of interest to the molecule. It may track a chemical bond as it lengthens and breaks through the course of a reaction. However, there are always other energetic possibilities unseen in this diagram. This is a single cross-section of a potential energy surface. A potential energy surface is like a landscape, a mountain range in which elevation corresponds to energy. The reaction progress diagram depicts a single pathway from one energetic valley to another. In one of these valleys is the reactant; the product is in the other. The path from one valley to another leads uphill, over a mountain pass, and down into the other valley again.

Suppose a traveler living in a valley must visit a friend in another valley. Each day the traveler takes the same path to the friend's house. He takes the easiest route, over the lowest mountain pass.

One day, instead of visiting the friend on foot, the traveler takes the train. The train takes a completely different pathway than the usual. It does not traverse the same mountain pass; it may take another route that was inaccessible by foot, or it may simply tunnel through the mountain. When the train reaches its destination, it picks up more passengers, repeating the process over and over.

In molecular terms, it is the reactant that takes the train, a low-energy pathway, on its way to the product. The train is a catalyst, and it has several important features:

Polymerization catalysts take small molecules called monomers and connect them together using the same reaction over and over again to make a long polymer chain. What was the minimum turnover number of the catalyst used to make each of the following polymers? (Mn = number average molecular weight, a statistical estimate of the average size of polymer chain.)

Catalysis often begins with a binding step, followed by one or more subsequent steps needed to carry out the reaction. For the following catalyzed reactions, draw the binding step using curved arrows.