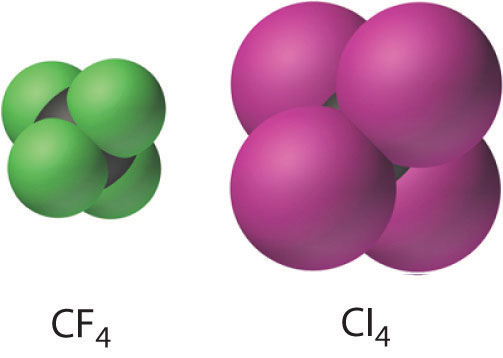 The selenium analog CSe2 is also known. Both have the linear structure predicted by the  VSEPR model, and both are vile smelling (and in the case of CSe2, highly toxic), volatile liquids. The sulfur and selenium analogues of carbon monoxide, CS and CSe, are unstable because the C≡Y bonds (Y is S or Se) are much weaker than the C≡O bond due to poorer π orbital overlap.

Binary compounds of carbon with less electronegative elements are called carbides. The chemical and physical properties of carbides depend strongly on the identity of the second element, resulting in three general classes: ionic carbides, interstitial carbides, and covalent carbides. The reaction of carbon at high temperatures with electropositive metals such as those of groups 1 and 2 and aluminum produces ionic carbides, which contain discrete metal cations and carbon anions. The identity of the anions depends on the size of the second element. For example, smaller elements such as beryllium and aluminum give methides such as Be2C and Al4C3, which formally contain the C4− ion derived from methane (CH4) by losing all four H atoms as protons. In contrast, larger metals such as sodium and calcium give carbides with stoichiometries of Na2C2 and CaC2. Because these carbides contain the C2− ion, which is derived from acetylene (HC≡CH) by losing both H atoms as protons, they are more properly called acetylides. Reacting ionic carbides with dilute aqueous acid results in protonation of the anions to give the parent hydrocarbons: CH4 or C2H2. For many years, miners’ lamps used the reaction of calcium carbide with water to produce a steady supply of acetylene, which was ignited to provide a portable lantern.

Elements with an electronegativity similar to that of carbon form covalent carbides, such as silicon carbide (SiC; Equation \(\PageIndex{1}\) ) and boron carbide (B4C). These substances are extremely hard, have high melting points, and are chemically inert. For example, silicon carbide is highly resistant to chemical attack at temperatures as high as 1600°C. Because it also maintains its strength at high temperatures, silicon carbide is used in heating elements for electric furnaces and in variable-temperature resistors.