Organic compounds are a broad class of compounds that got their name because they were originally found in living, or organic, matter. Physicians during the Renaissance and afterward strove to develop new medicines by extracting "active principles" from plants that were known to have medicinal properties. The same practice remains the most common method by which pharmaceutical companies develop medicines today.

Carbonyls are organic compounds that contain C=O bonds; that is, they contain double bonds between carbon and oxygen. (The word is pronounced car-bow-KNEEL.) This group of compounds is probably the most important single class of organic molecules. They can be divided into two classes. There are simple carbonyls, in which the carbon of the C=O bond is attached to other carbons, or possibly to hydrogens. There are also carboxylic acid derivatives, or carboxyloids, in which the carbony carbon is attached to a "heteroatom": an atom other than carbon or hydrogen, such as oxygen, nitrogen, sulfur, or a halogen.

Carbonyl compounds are very common in biological chemistry. Classes of compounds that contain the C=O bond include amides (found in proteins & peptides, used as signaling molecules and to help catalyze and guide reactions), aldehydes and ketones (found in carbohydrates, which play structural roles in cellulose, starch and DNA, for example) and esters (found in fats that form cell membranes, among other things). Understanding the reactivity of these bonds will help you to learn about many biological processes, as well as other transformations that are important in human society.

Common clusters of atoms, such as the H-C=O group in an aldehyde or the HO-C=O group in a carboxylic acid, are called "functional groups".

The amino acids are some of the fundamental building blocks of life. Fundamentally, they are carbonyl compounds. 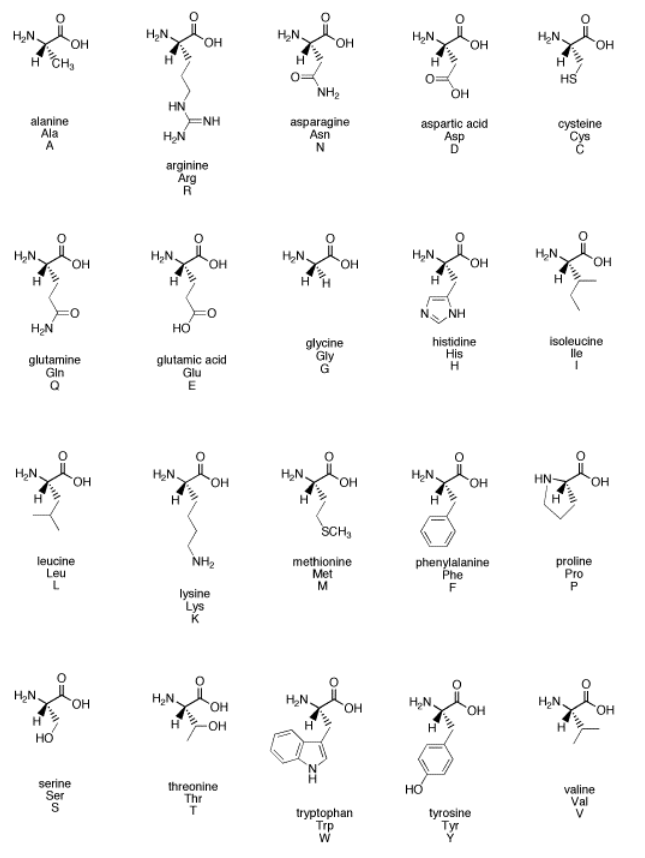 Figure \(\PageIndex{2}\): An alphabet of amino acids illustrates how common carbonyls are in biological chemistry.

What functional groups contain carbonyls in the family of amino acids illustrated above?

The HO-C=O or CO2H group present in all of the amino acids is called a carboxylic acid.

An additional carboxylic acid is present in aspartic acid and glutamic acid.

The H2N-C=O or CONH2 group present in asparagine and glutamine is called an amide.

Amino acids are connected together to form peptides. Peptides are "polymers", which means they are very large molecules made up of small, repeating units.

Carbohydrates are another important class of biomolecules. They also contain carbonyl groups. Like amino acids, there are many variations of carbohydrates, and they are sometimes found bound together to form polymers. Of course, carbohydrates are important in energy storage. In plants, they also provide structural strength, helping to form cell walls. 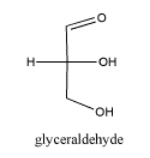 Identify which group is contained in each of the following carbohydrates: an aldehyde or a ketone?

Fatty acids, triglycerides and phospholipids are a third class of biomolecules that contain carbonyls. These compounds are also used in energy storage. In addition, phopholipids form a major part of cell membranes, so these compounds also play an important structural role in biology. Locate the carbonyls in the following biological molecules and the functional groups that contain carbonyls in each case. Ginkgolides are biologically active terpenoids from Ginkgo trees. They are thought to have medicinal properties.

Okundoperoxide is isolated from a type of sedge in Cameroon. It has modest anti-malarial properties.

D-erythrose is a typical carbohydrate.

Frequently, the carbonyls in carbohydrates are "masked", as in deoxyribose (below).

By moving one proton from one position to another, and then breaking a single C-O bond, discover where the carbonyl is hiding.