Enolate ions are just another example of anionic carbon nucleophiles. The reason they get a page to themselves is that they are especially important, especially in biological chemistry. They are also important in the synthesis of organic compounds, such as in the pharmaceutical industry.

You might have learned about metal hydroxides such as sodium hydroxide and lithium hydroxide. The metal-oxygen bond is ionic because of the large electronegativity difference between the metal and the oxygen. These compounds give rise to hydroxide ions. Those hydroxide ions are basic because they can easily pick up protons to become neutral water molecules. Metal hydroxides are commonly seen in chemistry, and they are thought of as strong bases.

Other oxygen anions are also able to act as strong bases, unless there is some resonance factor that delocalises the anion and makes it less reactive. Methoxide ion and butoxide ion are also common strong bases.

Show why an enolate ion, such as the one formed from 2-propanone, above, is particularly stable.

Show a mechanism, with curved arrows, for the formation of the enolate ion from 2-propanone, above.

In the example above, 2-propanone is deprotonated at the α position to form the corresponding enolate ion. Note that sodium hydroxide is not a strong enough base to convert all of the 2-propanone to its enolate. The resulting enolate is basic enough to pull a proton from a water molecule, so an equilibrium results.

That would be the case any time a strong base such as a hydroxide or an alkoxide was used to deprotonate a ketone or aldehyde. In the following example with pentanal, the reaction would also result in an equilibrium between the reactants and the products.

That means that all of those compounds on both the left hand and right hand side of the arrow would all be present as a mixture.

Negative charges are fairly stable on oxygen atoms. That allows this particular reaction to shift back to the left again, to form that hydroxide ion again. To make the reaction go all the way to the right, we would need a less stable anion on the left. That would make that anion more basic. Can you think of atoms that would be less stable as anions than oxygen?

In all of these compounds, the negative charge is on a less electronegative element than the oxygen of the hydroxide ion. That means that they are less stable and more reaction than hydroxide.

If one of these bases were to react with an aldehyde or ketone, the proton would be removed irreversibly. The delocalised enolate ion is actually more stable than the original amide ion in sodium amide, for example.

As a consequence, adding a very strong base to an aldehyde or ketone results in complete conversion into products. At the end of the reaction, there are no reactants left.

In contrast, a "strong base" such as sodium hydroxide won't really do the job. If it did, we would be trading in an anion on a more electronegative atom (oxygen) for an anion on a less electronegative atom (carbon) in the same row of the periodic table. That's not possible. The enolate anion that forms would be more basic than the hydroxide we began with, and most of the time it would just snatch the proton back from the water again, making ketone and hydroxide again.

However, it is sometimes really useful to have an equilibrium between a carbonyl compound and its enolate. That situation allows both a ketone (the 2-propanone, left) and its enolate (right) to be present at the same time. That means there is both a nucleophile and an electrophile (the ketone and the enolate). They will be able to react together.

While we are on the subject of bases, there is a third category of compounds that we would consider weak bases. The most common examples are amines (but not amides) and resonance-stabilised oxygen anions.

These compounds would be good at picking up excess protons that were floating around. However, in most cases they wouldn't be strong enough bases to provide an appreciable amount of enolate ion.

The reaction of an enolate nucleophile with another carbonyl compound is called an aldol reaction. A simple example of this reaction is shown here. This example involves the reaction of 2-propanone with its enolate.

Provide a mechanism, with curved arrows, for the aldol reaction of 2-propanone, above.

The biosynthesis of sugars, such as fructose, involves coupling smaller sugars together. If one sugar is converted into a nucleophile, it can donate electrons to the carbonyl on the other sugar, forming a new C-C bond. The carbonyl on the second sugar becomes a hydroxyl group in the new, larger sugar.

In the cell, sugars are typically in a phosphorylated form when they react in this way. Phosphorylation is often an important step in activating molecules for biochemical reactions.

Show the mechanism for the formation of the phosphorylated fructose shown above.

Sometimes, aldol reactions are followed by a subsequent reaction, called an elimination reaction. That reaction formally produces a molecule of water. Early studies of this reaction would result in droplets of condensation on the glassware in which the reaction occured; hence, it is sometimes called a condensation reaction.

The term "condensation" comes from the fact that the reaction formally results in loss of a water molecule from the alpha and beta positions (H from alpha and OH from beta). Early reactions that were observed to result in loss of water were frequently described as condensations because of the water droplets that would appear on the glassware (literally, condensation) as the reaction proceeded. The term "dehydration" is also used to describe this loss of water.

Provide a mechanism for the dehydration step in the aldol condensation shown above.

It can be hard to predict the outcome of an aldol reaction because of the fact that there are two possible products from an aldol reaction (one with a new hydroxyl and one with a new double bond). A chemist might try to make one product in the laboratory, and end up with the other. This process can be difficult to control. However, in general, the elimination reaction is encouraged by heating the reaction. The reaction sometimes occurs without elimination if the reaction is kept cool. However, there are also other factors that may come into play. 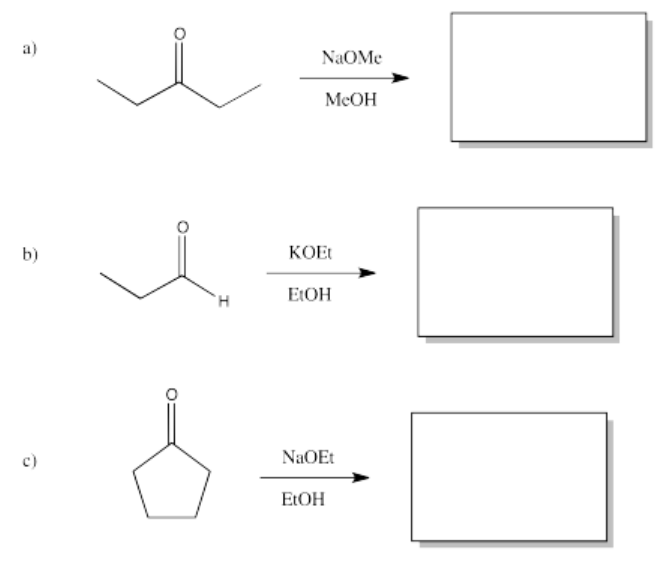 The following compound would give multiple products through different aldol condensation reactions. Show the products.

Sometimes, two different compounds may react together in an aldol reaction. One compound acts as the nucleophile, and the other one acts as the electrophile. However, the reaction is really not much different that the aldol reactions we have already seen.

The following compounds would give multiple products through different aldol condensation reactions. Show the products. There are cases where it becomes a lot more obvious which compound would be the electrophile and which one would be the nucleophile. Maybe one of the compounds has a carbonyl that is much less crowded than the other. For example, maybe one compound is an aldehyde and the other one is a ketone. The less crowded carbonyl is much more likely to act as a good electrophile.

Maybe one of the compounds does not even have any alpha-protons. In that case, it can't be deprotonated and it can't form an enolate anion. It won't be able to act as the nucleophile.

Only some of the following compounds may undergo aldol reactions. Select which ones may not undergo the reaction, and explain what factor prevents them from reacting.

Some of these compounds do not have alpha-protons, so they cannot form enolate ions.

Fill in the products of the following aldol condensations. 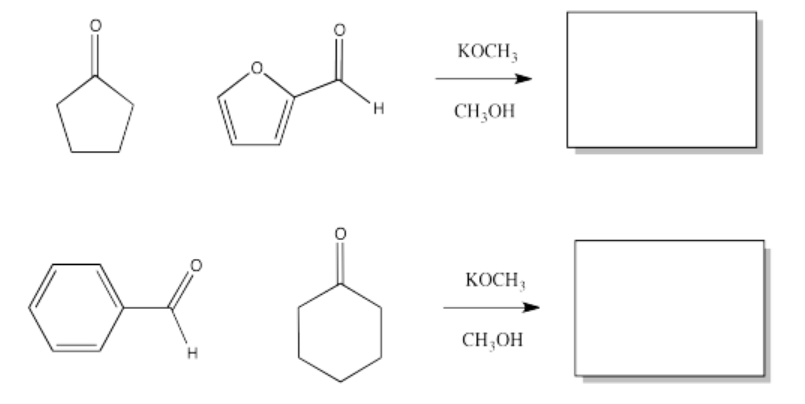 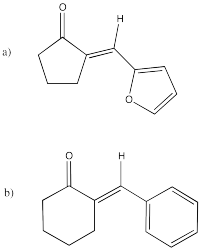 Aldol reactions do not just occur with enolate anions, however. Enols are the neutral form of enolates, protonated on the oxygen instead of the alpha carbon. Enols are also good nucleophiles. In an enol nucleophile, the pi bond acts as the electron source, rather than the lone pair. However, the pi bond gets a boost from the lone pair on the oxygen.

Enols are always present in equilibrium with aldehydes and ketones. An enol is a simple tautomer of a carbonyl compound. To get from one to the other, a proton is simply transferred from one position to the other.

Show the subsequent protonation step in the reactions involving the enol and the enamine above.

An enamine reaction is usually followed by hydrolysis of the C=N bond in the iminium ion. Show the mechanism for conversion of the iminium ion to the carbonyl via addition of aqueous acid. Which conditions would be most likely to form this aldol product (select a, b, c or d below)? 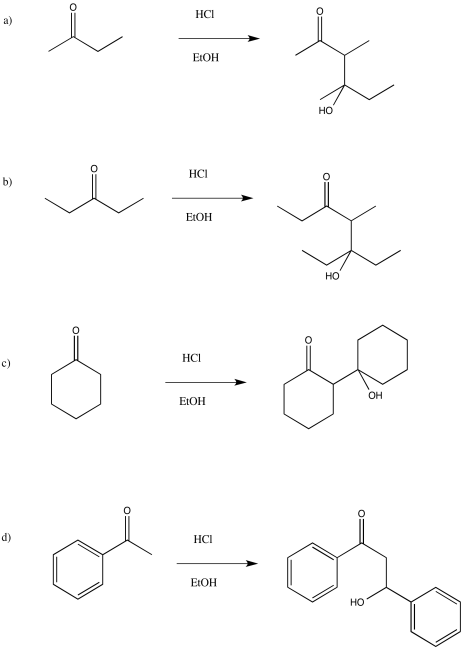 Draw the enol nucleophiles for the above question.

Provide the products of the following enamine additions, after hydrolysis.