Ping-pong mechanism, also called a double-displacement reaction, is characterized by the change of the enzyme into an intermediate form when the first substrate to product reaction occurs. It is important to note the term intermediate indicating that this form is only temporary. At the end of the reaction the enzyme MUST be found in its original form. An enzyme is defined by the fact that it is involved in the reaction and is not consumed. Another key characteristic of the ping-pong mechanism is that one product is formed and released before the second substrate binds. The figure below explains the Ping Pong mechanism through an enzymatic reaction.

This image shows that as substrate A binds to the enzyme, enzyme-substrate complex EA forms. At this point, the intermediate state, E* forms. P is released from E* , then B binds to E*. B is converted to Q, which is released as the second product. E* becomes E, and the process can be repeated. Often times, E* contains a fragment of the original substrate A.This fragment can alter the function of the enzyme, gets attached to substrate B, or both.

Here is another diagram showing this same reaction: 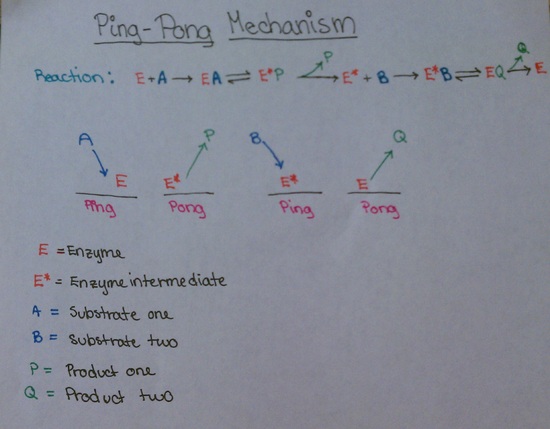 Another example of an enzyme that exhibits a ping-pong mechanism is pyruvate carboxylase. This enzyme catalyzes the addition of carbon dioxide to pyruvate in order to form oxaloacetate. (leads to gluconeogenesis) This biotin-containing enzyme works by binding CO2 (A) to form carboxybiotin (EA). The biotin swings over towards pyruvate (E*P) and releases CO2. (P, due to the fact that it had been moved from its original binding site) Pyruvate (B), in close proximity to CO2, attacks the partial positive of Carbon in CO2 (E*B). Oxaloacetate is formed within the enzyme (EQ) and gets released (Q). While this attack is occurring, biotin swings back to its initial position, (E* --> E) and is ready to bind another CO2.

An important factor to understand about the ping-pong mechanism is that when plotting a 1/v and 1/[A] plot at varying concentrations of B, a series of parallel lines are seen. In this case A is the first substrate and B being the second substrate.

Refer to these sections on enzyme kinetics and michaelis-menten kinetics to get a better understanding of what this type of plot means.