X-rays are partially scattered by atoms when they strike the surface of a crystal. The part of the X-ray that is not scattered passes through to the next layer of atoms, where again part of the X-ray is scattered and part passes through to the next layer. This causes an overall diffraction pattern, similar to how a grating diffracts a beam of light. In order for an X-ray to diffract the sample must be crystalline and the spacing between atom layers must be close to the radiation wavelength. 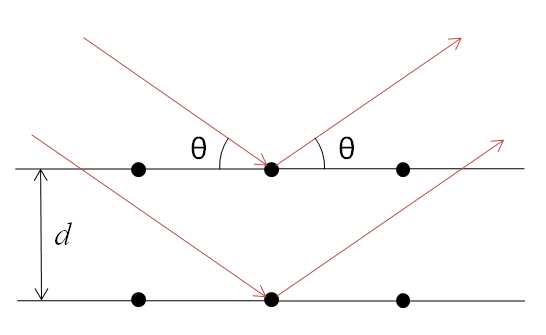 Since a highly regular structure is needed for diffraction to occur, only crystalline solids will diffract; amorphous materials will not show up in a diffraction pattern. 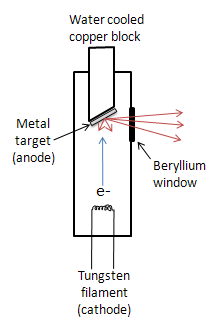 While other sources such as radioisotopes and secondary fluorescence exist, the most common source of X-rays is an X-ray tube. The tube is evacuated and contains a copper block with a metal target anode, and a tungsten filament cathode with a high voltage between them. The filament is heated by a separate circuit, and the large potential difference between the cathode and anode fires electrons at the metal target. The accelerated electrons knock core electrons out of the metal, and electrons in the outer orbitals drop down to fill the vacancies, emitting X-rays. The X-rays exit the tube through a beryllium window. Due to massive amounts of heat being produced in this process, the copper block must usually be water cooled

While older machines used film as a detector, most modern equipment uses transducers that produce an electrical signal when exposed to radiation. These detectors are often used as photon counters, so intensities are determined by the number of counts in a certain amount of time.

Copper emits radiation at 1.5418Å. If a diffraction pattern taken with a copper X-ray tube source shows a peak at 40, what is the corresponding d spacing? (Hint: Don't forget that diffraction patterns are plotted in \(2θ\), not \(θ\).