Q1:  Draw a block diagram of the components of a spectrophotometer.

Q2:  What molecular properties must a compound have in order to absorb UV-VIS radiation?

The compound must have electrons that absorb light in the UV-VIS range.  For example, in organic molecules, this is due to electronic transitions from a bonding or non-bonding orbital to an empty anti-bonding.  The following diagram summarizes possible absorption transitions.

Q3:  Do you think phosphate ions have the ability to absorb UV or visible radiation? Justify your answer.

Phosphate might be able to absorb light in the UV or visible range but this transition may not be very specific and therefore may not be useful for analytical determinations.

The next activity can be performed in lab using a spectrophotometer and solutions of red and blue dyes or can be simulated using the simulator at the following website http://web.mst.edu/~gbert/ColorScan/Spectrophotometry.HTML

Prepare solutions of red dye and blue dye and record their spectra between 400 and 700 nm.

Q4:  Is it possible to determine the concentration of the blue dye if it is contaminated with some of the red dye?

When observing the absorption spectrum of the red dye, one can see that its absorbance at 630 nm is basically zero.  Therefore, it is possible to determine the concentration of blue dye in presence of red dye because there is not an overlap of the two absorptions at λmax .  Beer’s law allows to calculate simultaneously the concentration of multiple analytes as long as the contribution from one component to the absorbance at the analytical wavelength of the other component is known and accounted for.

Q5:  When does it become possible to selectively measure the blue dye in presence of the red dye?

When the contribution to the absorbance by the red dye at 630 nm is very small.

Q6: Draw a representative plot of A versus c if the spectrophotometer is set to λmax.

A general plot of Absorbance vs. Concentration (expressed in parts per million) will look like: 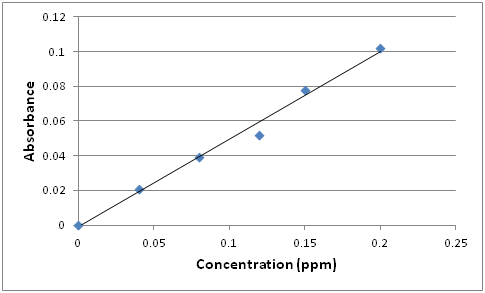 Q7: How could you use this plot to determine the concentration of an unknown?

Q8: What wavelength would you choose to quantitatively determine orthophosphate by the molybdenum blue method?

Looking at the absorbance spectrum, the maximum absorbance peak is between 850 and 900 nm.  More specifically, a wavelength around 880 nm seems the most appropriate choice.

Q9: What potential interferences would limit the measurement of orthophosphate using the molybdenum blue method?

If there were other species that absorbed at the same wavelength, they would create an interference.  However, the sample would appear blue so one would know right away that the method would not be appropriate.  Another possible interference could be caused by components in the sample that would react with either ascorbic acid or ammonium paramolybdate, thus preventing the formation of the “molybdenum blue” complex.

Q10: What steps could you take in the sample preparation to decrease the chances of interfering species in the orthophosphate analysis?

If the sample was blue colored to begin with, the method could not be applied unless the blue interferent were removed by some extraction procedure.  Cleaning the glassware, such as acid washing, ensure that contaminations are minimized.  Other possible interferences such as suspended solids or debris that can compromise the analysis can be removed by filtration.

Q11: Looking at the interferences listed in EPA method 365.1 will any of these affect the way you will analyze your sample for orthophosphate?

According to EPA method 365.1 a potential interferent to the analysis of phosphate is iron in large concentrations.  Iron can precipitate phosphate causing loss of analyte.  Arsenates are also determined similarly to phosphorus and should be considered when present in concentrations higher than phosphorus.  Sample turbidity should be removed by filtration prior to analysis.  Any sample color in the same range as that produced by the “molybdenum blue” complex will interfere with the analysis.

Q12: Given that a stock solution of 3 mg/L phosphate (PO43-) is equivalent to a concentration of 1 mg/L of elemental phosphorous (P), how many milliliters will you have to pipette to prepare 25.00 mL of the following six standards?

Similar calculations can be made to determine the volume of stock solution needed to prepare each standard.  The table below provides the calculated amounts.

Q13: What is the purpose of preparing the standard at 0.00 mg/L P? How is it used in the analysis?

The 0.00 mg/L standard is used as the blank in the analysis to zero the response of the spectrophotometer.

Q15: What relationship do you observe between absorbance and concentration? A linear relationship between absorbance and concentration can be observed.

Q16: What parameter allows us to determine whether there is a good fit between absorbance and phosphate concentration?

The correlation coefficient, R2.  The closer the value to 1, the better the fit.

Q17: What is the average concentration of phosphate (expressed in mg P/L) in the pond water?

In order to calculate the average concentration of phosphate in the pond water, we need to use the calibration equation, y = 0.5054x – 0.001

Q18: What parameter allows you to assess if the measurement above is reproducible?

Q19: How would do determine the average signal and the associated standard deviation of the method blank using the UV-VIS spectrophotometer?

A blank can be prepared that contains all reagents except for the analyte (in this case phosphate).  The blank is scanned multiple times (typically 30 or above) and the average and standard deviation of all the scans is calculated.

Q20: If you determined that the average signal from the method’s blank is 0.0081 and the standard deviation is 0.0017, what is the minimum distinguishable analytical signal of the method? What is the detection limit?

The minimum distinguishable analytical signal can be calculated from the average method’s blank and its standard deviation:

From here, the limit of detection c DL can be estimated:

Q21: Would you be able to detect phosphate in the pond water mentioned above if the absorbance of an unknown sample was 0.003?

No, it would not be possible to detect phosphate in a water sample with an absorbance of 0.003 since it falls below the minimum distinguishable analytical signal.

Q22: What are the likely advantages of automating a method?

An automated sampling method would allow a person to process many samples rapidly and with good reproducibility.