​During the 1800's, when most of the elements were being discovered, many chemists tried to classify the elements according to their similarities. In 1829, Johann Dobereiner noted chemical similarities in several groups of three elements and placed these elements into what he called triads. His groupings included the triads of 1) chlorine, bromine, and iodine, 2) sulfur, selenium, and tellurium, 3) calcium, strontium, and barium, and 4) lithium, sodium, and potassium. In all of the triads, the atomic weight of the second element was almost exactly the average of the atomic weights of the first and third element.

In 1864, John Newlands saw a connection between the chemical properties of elements and their atomic masses. He stated that if the known elements, beginning with lithium are arranged in order of increasing mass, the eighth element will have properties similar to the first, the ninth similar to the second, the tenth similar to the third, and so on. Newlands called his relationship the law of octaves, comparing the elements to the notes in a musical scale. Newlands tried to force all the known elements to fit into his octaves but many of the heavier elements, when discovered, did not fit into his patterns.

Mendeleev Organized His Table According to Chemical Behavior By 1869, a total of 63 elements had been discovered. As the number of known elements grew, scientists began to recognize patterns in the way chemicals reacted and began to devise ways to classify the elements. Dmitri Mendeleev, a Siberian-born Russian chemist, was the first scientist to make a periodic table much like the one we use today.

Mendeleev's table listed the elements in order of increasing atomic mass. Then he placed elements underneath other elements with similar chemical behavior. For example, lithium is a shiny metal, soft enough to be cut with a spoon. It reacts readily with oxygen and reacts violently with water.

When it reacts with water, it produces hydrogen gas and lithium hydroxide. As we proceed through the elements with increasing mass, we will come to the element sodium. Sodium is a shiny metal, soft enough to be cut with a spoon. It reacts

readily with oxygen and reacts violently with water. When it reacts with water, it produces hydrogen gas and sodium hydroxide. You should note that the description of the chemical behavior of sodium is very similar to the chemical description of lithium. When Mendeleev found an element whose chemistry was very similar to a previous element, he placed it below the similar element.

﻿Mendeleev avoided Newlands' mistake of trying to force elements into groups where their chemistry did not match, but still ran into a few problems as he constructed his table. Periodically, the atomic mass of elements would not be in the right order to put them in the correct group. For example, look at iodine and tellurium on your periodic table. Tellurium is heavier than iodine, but he put it before iodine in his table, because iodine has properties most similar to fluorine, chlorine, and bromine. Additionally, tellurium has properties more similar to the group with oxygen in it. On his table, he listed the element its place according to its properties and put a question mark (?) next to the symbol. The question mark indicated that he was unsure if the mass had been measured correctly.

Another problem Mendeleev encountered was that sometimes the next heaviest element in his list did not fit the properties of the next available place on the table. He would skip places on the table, leaving holes, in order to put the element in a group with elements with similar properties. For example, at the time the elements Gallium and Germanium had not yet been discovered. After zinc, arsenic was the next heaviest element he knew about, but arsenic had properties most similar to nitrogen and phosphorus, not boron. He left two holes in his table for what he claimed were undiscovered elements. Note the dashes (-) with a mass listed after it in his original table. These indicate places in which he predicted elements would later be discovered to fit and his predicted mass for these elements.

Mendeleev went further with his missing elements by predicting the properties of elements in those spaces. In 1871 Mendeleev predicted the existence of a yet-undiscovered element he called eka-aluminum (because its location was directly under aluminum's on the table). The table below compares the qualities of the element predicted by Mendeleev with actual characteristics of Gallium (discovered in 1875).

Mendeleev made similar predictions for an element to fit in the place next to silicon. Germanium, isolated in 1882, provided the best confirmation of the theory up to that time, due to its contrasting more clearly with its neighboring elements than the two previously confirmed predictions of Mendeleev to with theirs. 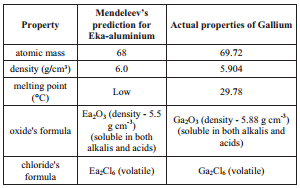 How was Mendeleev able to make such accurate predictions? He understood the patterns that appeared between elements within a family, as well as patterns according to increasing mass, that he was able to fill in the missing pieces of the patterns. The ability to make accurate predictions is what put Mendeleev's table apart from other organization systems that were made at the same time and is what led to scientists accepting his table and periodic law.

Changes to our Modern Periodic Table 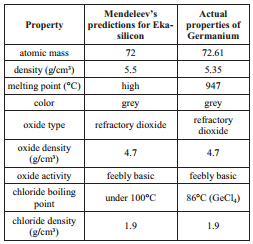 The periodic table we use today is similar to the one developed by Mendeleev, but is not exactly the same. There are some important distinctions.

As previously noted, Mendeleev organized elements in order of increasing atomic mass, with some problems in the order of masses. In 1914 Henry Moseley found a relationship between an element's X-ray wavelength and its atomic number, and therefore organized the table by nuclear charge (or atomic number) rather than atomic weight. Thus Moseley placed argon (atomic number 18) before potassium (atomic number 19) based on their X-ray wavelengths, despite the fact that argon has a greater atomic weight (39,9) than potassium (39.1). The new order agrees with the chemical properties of these elements, since argon is a noble gas and potassium an alkali metal. Similarly, Moseley placed cobalt before nickel, and was able to explain that tellurium should be placed before iodine, not because of an error in measuring the mass of the elements (as Mendeleev suggested), but because tellurium had a lower atomic number than iodine.

Moseley's research also showed that there were gaps in his table at atomic numbers 43 and 61 which are now known to be Technetium and Promethium, respectively, both radioactive and not naturally occurring. Following in the footsteps of Dmitri Mendeleev, Henry Moseley also predicted new elements.

Organization of the Periodic Table