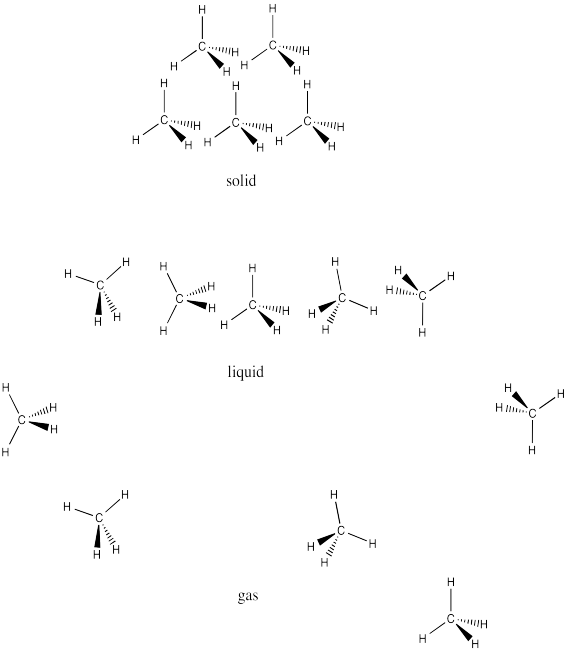 Because of the large numbers of electrons in bromine, we would expect a higher boiling point in 3,4-dibromohexane.

These compounds all contains lots of non-polar C-C and C-H bonds, which would not have appreciable dipoles. However, in each pair, there is a compound that contains more polar bonds as well: C-Cl, C-N and C-O.

In dichloromethane, there are two polar bonds. Both bonds are polarized towards the more electronegative chlorine. As drawn below, one bond has a dipole straight to the right. The other bond has a dipole that goes down and to the left. If the molecule has an overall dipole, with a positive end of the whole molecule and a negative end of the whole molecule, which end would be positive and which would be negative?

It seems reasonable that the positive end would be somewhere over on the hydrogen side and the negative end would be somewhere over on the chlorine side. The overall dipole, as opposed to the individual bond dipoles, would point somewhere in the direction of the blue, dashed arrow. But how big would it be? Surely it's bigger than either of the two individual dipoles, because they are adding together, right? 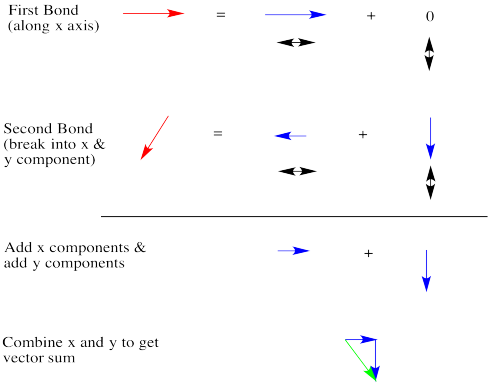 The sum of the up/down arrows is just a small arrow down. Overall, the sum is a green arrow going down and to the right. The result doesn't really seem any bigger than an individual bond dipole.

In each case, the one on the right has a larger dipole and a higher melting point. 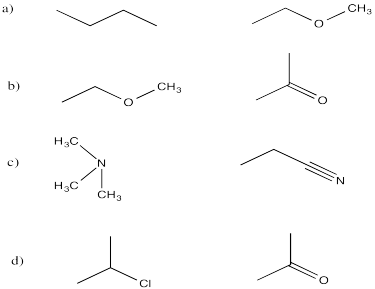 Only ethylamine and ethanoic acid have the N-H or O-H bonds that are polar enough for hydrogen bonding.

The one with the greatest potential for hydrogen bonding will have the highest melting point.

This problem is similar to the previous one, but in this case the attraction between the strong dipoles of the nitrile groups would be too much to overcome.

The predicted order, from most soluble to least, would be dimethylsulfoxide > acetonitrile > pyridine > dichloromethane > triethylamine.