Organic compounds are very common in chemistry and biology. Some familiarity with some common types of compounds based on carbon and a few other elements will help you to understand organic chemistry and related fields. The most common structural piece in organic chemistry is the carbon-carbon bond. Most organic compounds are filled with carbon-carbon bonds. Very often, a network of carbon atoms are single-bonded to each other, and to hydrogen atoms, to build up a complicated structure.

Specific alkanes are given names that say something about their structures. Their names end in "ane"; that means they contain only single bonds, not double or triple bonds. A compound that contains no double or triple bonds is sometimes called "saturated." They are sometimes called "paraffinic" hydrocarbons, which means the same thing as saturated hydrocarbons. The name also contains a part that tells how many carbons are found connected in the chain. These prefixes are used throughout organic chemistry to name other kinds of compounds, so you need to memorize them.

Provide names for the following alkanes.

The chain of carbons in an alkane is called an alkyl chain. Sometimes there are smaller alkyl chains attached to the main chain of an alkane. The same prefixes can be used to tell how many carbons are in these smaller branches.

Numbers are used to count how far along the chain these branches occur. You need to start on the end of the chain and count the carbons until you get to the place where the branch occurs. If there are two different possible chains, choose the longest chain as the base name. If there are two different directions possible, start at the one that gives the lowest numbers for the branches.

If there are two different branches of the same size on a chain, you need to say so. A different prefix is used to say how many of the same piece are present.

All these elements will be used in naming other compounds as well.

Any feature other than an alkyl chain is called a "functional group". A functional group is also just a place where reactions take place. Homoatomic functional groups contain only carbon and hydrogen. They differ from alkyl groups only in having multiple C-C bonding.

Provide names for the following alkenes.

Provide names for the following hydrocarbons. 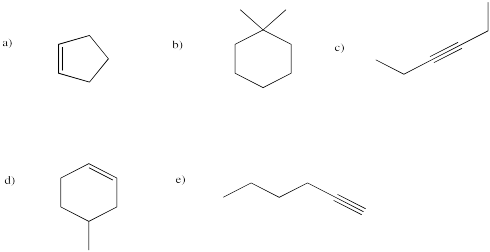 Describe the geometries of the following carbons:

a) any carbon in pentane. b) the second carbon in 2-butene. c) the first carbon in 1-hexyne.

Aromatic compounds appear to contain C-C double bonds but they are very different from alkenes. The most common aromatic is benzene. Because benzene is a very common structural piece, you should be familiar with some of the language associated with it.

Benzene rings with two groups attached are common enough that different terms are used to describe their isomers. The terms ortho-, meta- and para- are used only to describe the relationship between two groups around benzene, and not any other compounds. These terms are sometimes abbreviated to o-, m- or p-. Alternatively, two groups attached to a benzene can simply be numbered in order to make it clear where they are. If more than two groups are attached, numbering is used; terms such as "ortho" no longer apply.

Note that a benzene group is sometimes called a phenyl group. It is not called a benzyl group, nor a benzoyl group. Those two groups both contain a phenyl ring but they are not exactly the same.

Provide names for the following aromatics.

Aldehydes and ketones have specific naming conventions. The suffix for the name of an aldehyde is "-al;" whereas the suffix for the name of a ketone is "-one." In the case of a ketone, the location of the carbonyl along the chain can be described with a number. Otherwise, the names of aldehydes and ketones follow the rules we have seen for other organic compounds.

Provide names for the following compounds.

In carboxylic acids, the carbonyl carbon is attached to an OH group. The OH group is often called a hydroxyl group. Fatty acids and amino acids are examples of biological compounds that contain carboxylic acids.

Naming simple examples of these compounds, as before, involves a change in the suffix of the name. The suffix for a carboxylic acid is "-oic acid." Esters really have a two-part name. The first part describes the group attached to the enchained oxygen atom of the ester, with the suffix "-yl." The second part describes the portion that contains the carbonyl, with the suffix "-oate." For an amide, the suffix is "amide." However, other groups attached to the nitrogen are usually prefixed with "N-;" this is a little like numbering the position of a group in previous examples, but this time it underscores that the group is attached to a nitrogen.

Provide names for the following carboxyloids.

A third biologically important carboxylic acid derivative contains a sulfur attached to the carbonyl carbon. Usually the sulfur is attached to another carbon as well. Because sulfur is in the same group in the periodic table as oxygen, this functional group is similar to an ester. It is called a thioester. It is much less common than amides and esters. A biological example of a thioester is acetyl conezyme A, which plays an important role in many biological reactions. In fact, the thioester plays the key role in the reactions of acetyl coenzyme A.

Naming thioesters is just like naming other esters, except that the prefix "thio-" is inserted into the second part of the name.

Acid anhydrides are prepared by heating carboxylic acids at high temperatures until water is lost. Acid anhydrides contain two carbonyl units, connected by an oxygen. Usually those two units are the same as each other. The name for an anhydride indicates the number of carbons in just one of those pieces (since the other one is the same) with the suffix "-oic (space) anhydride."

Acid chlorides have a chlorine atom attached to the carbonyl carbon. The name for an acid chloride contains the suffix "-oyl (space) chloride." Other acid halides (such as acid fluorides) are known, but they are less common than acid chlorides.

There are several heteroatomic functional groups that do not contain carbonyls.

Alcohols contain an OH or hydroxyl group, but the hydroxyl is not attached to a carbonyl.

Sometimes alcohols are classed into sub-groups, as "primary", "secondary" or "tertiary." Those words just describe the carbon attached to the OH group. How many carbons are attached, in turn, to that carbon? Are there two, three, or just one? Those classifications have some influence on how reactive the alcohol will be under different conditions.

The suffix in the name of an alcohol is "ol." It doesn't matter whether the alcohol is described as a primary, secondary or tertiary one They are still named according to the same rule.

Phenols are alcohols in which the hydroxyl group is directly attached to a phenyl group, or benzene ring. Their behaviour is different enough from other alcohols that they are sometimes thought of as a separate group. For one thing, they are somewhat acidic. Coming into contact with phenols, whether they are found in pine resin or, in a much more extreme case, poison ivy, can cause severe itching in the skin. Regular alcohols are much less likely to cause that reaction.

Ethers are kind of like alcohols in that they contain oxygen atoms. Ethers contain a C-O-C group, but neither carbon is part of a carbonyl. Generally, to name an ether, we list the two parts attached to the oxygen atom, and follow those two names with "ether."

Thiols and thioethers are the sulfur analogues of alcohols and ethers. Phosphines are the phosphorus analogues of amines. None of these groups are as common as alcohols, ethers and amines. The sulfur-containing compounds are named in a similar way to their oxygen analogues, but with the suffix "-thioether" or "-thiol" used instead of "-ether" or "-ol." Similarly, phosphines have the suffix "-phosphine" instead of "-amine."

Alkyl halides, or haloalkanes, are compounds that contain a halogen that is not attached to a carbonyl. These compounds are not common biologically, but they are important industrially. Usually halogens are treated like alkyl groups in terms of naming compounds that contain them. A halogen is described as a prefix ending in "-o," rather than the prefix ending in "-yl" that is used with alkyl groups. For example, an alkyl bromide is named as a bromoalkane, such as bromoethane or bromohexane.

There are a few other functional groups that contain multiple bonds to nitrogen. An imine is the nitrogen analogue of an aldehyde. An imine contains a carbon-nitrogen double bond. The carbon almost always has a hydrogen attached as well. The word "imine" is just appended to the name of the related aldehyde to describe a specific imine.

A nitrile contains a carbon-nitrogen triple bond. The suffix for a nitrile is just "-nitrile."

A nitro group contains the NO2 unit. "Nitro-" is usually added as a prefix to signal the presence of this group in a compound.

Provide names for each of the following compounds. 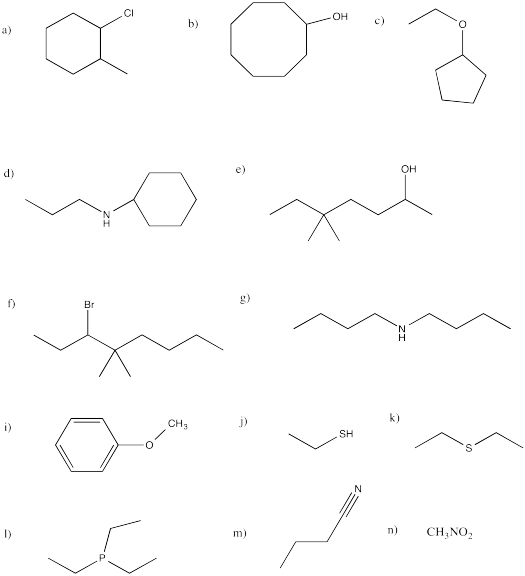 Each of the following compounds contains three functional groups. Identify them. 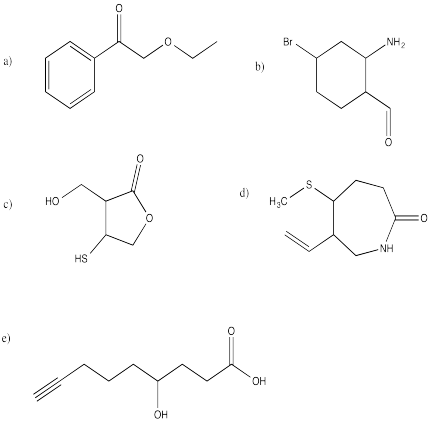