Chemistry is the study of the material world. What are different materials made of? How is their composition and structure related to their properties? How does one material become transformed into another? These are the sorts of questions that have driven the development of chemistry. People have been using chemistry for a very long time. Medicines were obtained from plants in early societies all over the world. People made dyes for clothing and paints for houses. Metallurgy was practiced in India and the Sahel, in Africa, before 1000 BC.

The Greek philosopher, Democritus, is often cited as the earliest person to formulate an idea of atoms, although similar ideas were recorded in India around the same time. Democritus thought that all things were made of atoms. Atoms were very small, he thought. They were also indivisible. Although you could cut a piece of wood in half, and cut each of those pieces in half, at some point you would reach the stage at which the wood could not be cut any longer, because you had a slice that was one atom thick.

A more practical aspect of chemistry has its roots in the Islamic Golden Age. Practitioners such as Jabir Ibn Hayyan developed laboratory apparatus and experimental methods to recrystallize and distill compounds from natural sources. Like Democritus, these early chemists wanted to know what the world is made of, but they were also trying to make improvements in practical applications such as tanning leather, making glass or rust-proofing iron.

Natural products are widely used in food, medicine and industrial applications. See if you can match the following natural products to their original, natural source.

The translation of Arabic texts into Latin helped spur the European Renaissance. Practical observations from the Islamic period, such as the fact that matter could be converted into different forms but did not disappear, gave rise to some of the most fundamental ideas of modern chemistry.

As is usually true in science, new developments in chemistry built on earlier work as well as the work of contemporary colleagues, continually improving our understanding of nature in small steps. In the 1600's, Robert Boyle adopted the Islamic emphasis on experimental work. Among his experiments, he was able to isolate the hydrogen gas formed by reacting metals with acids, as other scientists were doing at that time. In the 1700's, Joseph Priestley isolated several different "airs" or gases, including oxygen. Henry Cavendish showed that hydrogen combined with oxygen to form water. Antoine Lavoisier argued that oxygen and nitrogen, the other major component of air, are elements. The free exchange of ideas allowed people to rapidly advance our understanding of the material world.

Lavoisier, in particular, was important in bringing a number of important ideas together. He clearly stated that elements were the basic unit of matter, that could not be obtained from other materials. Compounds were made by combining different elements. His careful use of a balance to weigh reactants and products of an experiment clearly confirmed the idea of conservation of mass: the total mass of products after a reaction equals the total mass of reactants. These conclusions were more sophisticated versions of earlier ideas, and Lavoisier was able to present them in a way that eventually gained wide acceptance.

In the 1800's one of the principle proponents of the developing atomic theory was John Dalton. He advanced the idea that all atoms of a particular element are identical (as far as he could tell at that time). An element is a fundamental atomic building block from which other materials are made. Dalton performed analyses to try to deduce the atomic weights of different elements. Taking these ideas together, he showed that a particular compound always contained the same elements in the same ratio.

There is one other compound containing copper and oxygen in a different ratio; it is called cuprous oxide, and it has the formula Cu2O. However, it is very different from cupric oxide. The most obvious difference is that cuprous oxide is red whereas cupric oxide is black. Once again, when elements are combined in different ratios, different materials are produced, and they have properties that differ from each other and from they elements of which they are comprised.

Ratios are commonly used in baking. Usually, ingredients must be combined in the correct proportions in order to make brownies or a cake.

a) Brownies and cake have a lot of ingredients in common. Looking at those ingredients that are found in both brownies and cake, do you see any difference in the proportions used? How do you think that affects the properties of the product?

b) The above cake recipe is just for one shallow cake pan. If you wanted a two-layer cake, what would you do with the recipe?

c) Suppose you are cleaning out your fridge and want to turn all of your eggs into brownies. If the above recipe makes sixteen 2" x 2" brownies, how many brownies could you make with a dozen eggs? How much flour would you need to accomplish your goal?

d) You want to make some brownies but you don't have any measuring cups or spoons. You notice that there is a really nice balance in the chem lab and you decide to measure your ingredients there (it is a terrible idea, by the way). You find a list of conversions, including the following:

How many grams of flour, sugar and cocoa would you need to use for a batch of brownies?

e) Why do you think a cup of flour does not weigh the same as a cup of sugar or a cup of cocoa?

Mercury forms two different compounds with oxygen: mercuric oxide (HgO, which is red) and mercurous oxide (Hg2O, which is black).

a) How many atoms of mercury combine with one atom of oxygen to form one unit of mercuric oxide, HgO?

b) How many atoms of mercury combine with one atom of oxygen to form one unit of mercurous oxide, Hg2O?

c) Given the following approximate atomic weights, what is the total weight of one unit of mercuric oxide?

d) What is the weight of one unit of mercurous oxide?

It is pretty difficult to weigh an individual atom. Because we are working with ratios, we can always scale up and keep the ratio of atoms the same, and we will just make more of the compound we want. Instead of weighing things in atomic mass units, we usually weigh them in grams.

A mole of mercury weighs 200 g. A mole of oxygen atoms weighs 16 g. A mole is just a scaled-up batch of atoms; it is just the atomic mass number of the atom, but weighed in grams instead of amu.

Priestley isolated oxygen by heating up mercuric oxide. How much oxygen could be made by heating 1 g of HgO?

By the late 1800's, enough different elements had been isolated that people began to notice patterns in their properties. If you listed the elements out by weight, elements with similar properties seemed to occur at regular intervals throughout the list. A Russian chemistry teacher, Dmitri Mendeleev, came up with a convincing way to convey this "periodicity" in a table. This is the modern periodic table (an example is shown in figure AT1.1).

The periodic table as laid out by Mendeleev had predictive value. It presented the structure-property relationships of atoms. If you knew something about one element in the table, it would lead you to believe that other elements in the same column would have similar properties. Furthermore, there were gaps in the table where there ought to be an element, but none was known. It was predicted that these elements would eventually be discovered, and they were.

However, people were not satisfied with the idea of the atom as the basic building block of the universe. People wanted to know how atoms themselves were made. Ultimately, answering this question depended on the development of quantum mechanics. 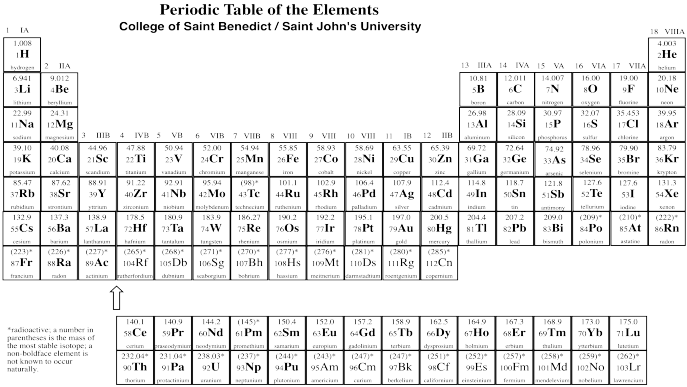 Figure AT1.1. The periodic table.