For each of the following equations determine the optimum response using the one-factor-at-a-time searching algorithm. Begin the search at (0,0) by first changing factor A, using a step-size of 1 for both factors. The boundary conditions for each response surface are 0 ≤ A ≤ 10 and 0 ≤ B ≤ 10. Continue the search through as many cycles as necessary until you find the optimum response. Compare your optimum response for each equation to the true optimum.

Note: These equations are from Deming, S. N.; Morgan, S. L. Experimental Design: A Chemometric Approach, Elsevier: Amsterdam, 1987, and pseudo-three dimensional plots of the response surfaces can be found in their Figures 11.4, 11.5 and 11.14.

Determine the uncoded equation for the response surface.

Koscielniak and Parczewski investigated the influence of Al on the determination of Ca by atomic absorption spectrophotometry using the 2k factorial design shown in the following table.11

Strange reports the following information for a 23 factorial design used to investigate the yield of a chemical process.12

Pharmaceutical tablets coated with lactose often develop a brown discoloration. The primary factors affecting the discoloration are temperature, relative humidity, and the presence of a base acting as a catalyst. The following data have been reported for a 23 factorial design.13

The following data for a 23 factorial design were collected during a study of the effect of temperature, pressure, and residence time on the % yield of a reaction.14

Duarte and colleagues used a factorial design to optimize a flow-injection analysis method for determining penicillin.15 Three factors were studied: reactor length, carrier flow rate, and sample volume, with the high and low values summarized in the following table.

The authors determined the optimum response using two criteria: the greatest sensitivity, as determined by the change in potential for the potentiometric detector, and the largest sampling rate. The following table summarizes their optimization results.

Here is a challenge! McMinn, Eatherton, and Hill investigated the effect of five factors for optimizing an H2-atmosphere flame ionization detector using a 25 factorial design.16 The factors and their levels were

A good empirical model provides an accurate picture of the response surface over the range of factor levels within the experimental design. The same model, however, may yield an inaccurate prediction for the response at other factor levels. For this reason, an empirical model, is tested before extrapolating to conditions other than those used in determining the model. For example, Palasota and Deming studied the effect of the relative amounts of H2SO4 and H2O2 on the absorbance of solutions of vanadium using the following central composite design.17

The reaction of H2SO4 and H2O2 generates a red-brown solution whose absorbance is measured at a wavelength of 450 nm. A regression analysis on their data yielded the following uncoded equation for the response (absorbance × 1000).

A newly proposed method is to be tested for its single-operator characteristics. To be competitive with the standard method, the new method must have a relative standard deviation of less than 10%, with a bias of less than 10%. To test the method, an analyst performs 10 replicate analyses on a standard sample known to contain 1.30 ppm of analyte. The results for the 10 trials are

Are the single-operator characteristics for this method acceptable?

A proposed gravimetric method was evaluated for its ruggedness by varying the following factors.

A standard sample containing a known amount of analyte was carried through the procedure using the experimental design in Table 14.5. The percentage of analyte actually found in the eight trials were found to be

Determine which factors, if any, appear to have a significant affect on the response, and estimate the expected standard deviation for the method.

Chichilo reports the following data for the determination of the %w/w Al in two samples of limestone.18

Construct a two-sample plot for this data and estimate values for σrand and σsyst.

The importance of between-laboratory variability on the results of an analytical method can be determined by having several laboratories analyze the same sample. In one such study, seven laboratories analyzed a sample of homogenized milk for a selected alfatoxin.19 The results, in ppb, are summarized below.

Eighteen analytical students are asked to determine the %w/w Mn in a sample of steel, with the results shown here.

(a) Given that the steel sample is 0.26% w/w Mn, estimate the expected relative standard deviation for the class’ results.

(b) The actual results obtained by the students are shown here. Are these results consistent with the estimated relative standard deviation?

If we hold factor A at level A1, changing factor B from level B1 to level B2 increases the response from 40 to 60, or a change ∆R, of

If we hold factor A at level A2, we find that we have the same change in response when the level of factor B changes from B1 to B2.

If we hold factor B at level B1, changing factor A from level A1 to level A2 increases the response from 20 to 80, or a change ∆R, of

If we hold factor B at level B2, we find that the change in response when the level of factor A changes from A1 to A2 is now 20.

Answers will vary here depending on the options you decided to explore. The last response surface is an interesting one to explore. Figure 14.26 shows the response surface as a level plot and a contour plot. The interesting feature of this surface is the saddle point on a ridge connecting a local optimum (maximum response of 4.45) and the global optimum (maximum response of 10.0). All three optimization strategies are very sensitive to the initial position and the step-size. 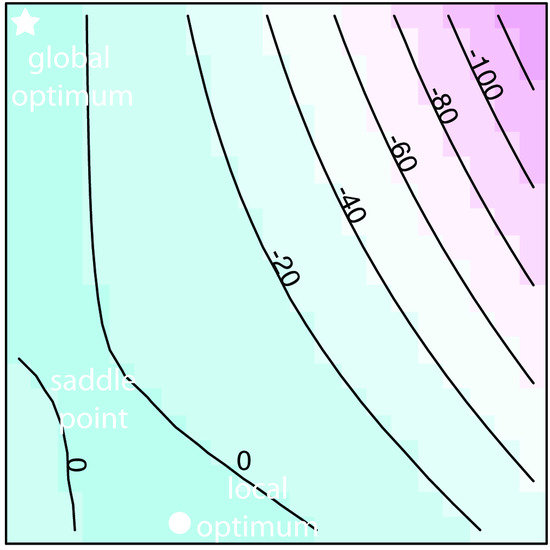