The array of equipment for making analytical measurements is impressive, ranging from the simple and inexpensive, to the complex and expensive. With three exceptions—measuring mass, measuring volume, and drying materials—we will postpone the discussion of equipment to later chapters where its application to specific analytical methods is relevant.

An object’s mass is measured using a digital electronic analytical balance (Figure \(\PageIndex{1}\)). An electromagnet levitates the sample pan above a permanent cylindrical magnet. The amount of light reaching a photodetector indicates the sample pan’s position. Without an object on the balance, the amount of light reaching the detector is the balance’s null point. Placing an object on the balance displaces the sample pan downward by a force equal to the product of the sample’s mass and its acceleration due to gravity. The balance detects this downward movement and generates a counterbalancing force by increasing the current to the electromagnet. The current returning the balance to its null point is proportional to the object’s mass. A typical electronic balance has a capacity of 100-200 grams, and can measure mass to the nearest ±0.01 mg to ±1 mg.

If the sample is not moisture sensitive, a clean and dry container is placed on the balance. The container’s mass is called the tare. Most balances allow you to set the container’s tare to a mass of zero. The sample is transferred to the container, the new mass is measured and the sample’s mass determined by subtracting the tare. Samples that absorb moisture from the air are treated differently. The sample is placed in a covered weighing bottle and their combined mass is determined. A portion of the sample is removed and the weighing bottle and remaining sample are reweighed. The difference between the two masses gives the sample’s mass.

Several important precautions help to minimize errors when measuring an object’s mass. A balance should be placed on a stable surface to minimize the effect of vibrations in the surrounding environment, and should be maintained in a level position. The sensitivity of an analytical balance is such that it can measure the mass of a fingerprint. For this reason materials being weighed should normally be handled using tongs or laboratory tissues. Volatile liquid samples must be weighed in a covered container to avoid the loss of sample by evaporation. Air currents can significantly affect a sample’s mass. To avoid air currents the balance’s glass doors should be closed, or the balance’s wind shield should be in place. A sample that is cooler or warmer than the surrounding air will create a convective air currents that affects the measurement of its mass. For this reason, warm or cool your sample to room temperature before determining its mass. Finally, samples dried in an oven should be stored in a desiccator to prevent them from reabsorbing moisture from the atmosphere. Figure \(\PageIndex{1}\): The photo shows a typical digital electronic balance capable of determining mass to the nearest ±0.1 mg. The sticker inside the balance’s wind shield is its annual calibration certification.

Although we tend to use interchangeably, the terms “weight” and “mass,” there is an important distinction between them. Mass is the absolute amount of matter in an object, measured in grams. Weight is a measure of the gravitational force acting on the object:

An object has a fixed mass but its weight depends upon the local acceleration due to gravity, which varies subtly from location-to-location.

A balance measures an object’s weight, not its mass. Because weight and mass are proportional to each other, we can calibrate a balance using a standard weight whose mass is traceable to the standard prototype for the kilogram. A properly calibrated balance will give an accurate value for an object’s mass.

A graduated cylinder is the simplest device for delivering a known volume of a liquid reagent (Figure \(\PageIndex{2}\)). The graduated scale allows you to deliver any volume up to the cylinder’s maximum. Typical accuracy is ±1% of the maximum volume. A 100-mL graduated cylinder, for example, is accurate to ±1 mL.

Figure \(\PageIndex{3}\): Two examples of 10-mL volumetric pipets. The pipet on the top is a transfer pipet and the pipet on the bottom is a Mohr measuring pipet. The transfer pipet delivers a single volume of 10.00 mL when filled to its calibration mark. The Mohr pipet has a mark every 0.1 mL, allowing for the delivery of variable volumes. It also has additional graduations at 11 mL, 12 mL, and 12.5 mL.

To fill a transfer pipet suction use a rubber bulb to pull the liquid up past the calibration mark (see Figure \(\PageIndex{3}\)). (Never use your mouth to suck a solution into a pipet!) After replacing the bulb with your finger, adjust the liquid’s level to the calibration mark and dry the outside of the pipet with a laboratory tissue. Allow the pipet’s contents to drain into the receiving container with the pipet’s tip touching the inner wall of the container. A small portion of the liquid will remain in the pipet’s tip and should not be blown out. With some measuring pipets any solution remaining in the tip must be blown out.

Delivering microliter volumes of liquids is not possible using transfer or measuring pipets. Digital micropipets (Figure \(\PageIndex{4}\)), which come in a variety of volume ranges, provide for the routine measurement of microliter volumes. A recent report describes a nanopipet capable of dispensing extremely small volumes. Scientists at the Brookhaven National Laboratory used a germanium nanowire to make a pipet delivering a 35 zeptoliter (10–21 L) drop of a liquid gold-germanium alloy. You can read about this work in the April 21, 2007 issue of Science News. Because a volumetric flask contains a solution, it is useful for preparing a solution with an accurately known concentration. Transfer the reagent to the volumetric flask and add enough solvent to bring the reagent into solution. Continuing adding solvent in several portions, mixing thoroughly after each addition. Adjust the volume to the flask’s calibration mark using a dropper. Finally, complete the mixing process by inverting and shaking the flask at least 10 times.

If you look closely at a volumetric pipet or volumetric flask you will see markings similar to those shown in Figure \(\PageIndex{6}\). The text of the markings, which reads

indicates that the pipet is calibrated to deliver (T. D.) 10 mL of solution with an uncertainty of ±0.02 mL at a temperature of 20 oC. The temperature is important because glass expands and contracts with changes in temperatures. At higher or lower temperatures, the pipet’s accuracy is less than ±0.02 mL. For more accurate results you can calibrate your volumetric glassware at the temperature you are working. You can accomplish this by weighing the amount of water contained or delivered and calculate the volume using its temperature dependent density.

You should take three additional precautions when working with pipets and volumetric flasks. First, the volume delivered by a pipet or contained by a volumetric flask assumes that the glassware is clean. Dirt and grease on the inner surface prevents liquids from draining evenly, leaving droplets of the liquid on the container’s walls. For a pipet this means that the delivered volume is less than the calibrated volume, while drops of liquid above the calibration mark mean that a volumetric flask contains more than its calibrated volume. Commercially available cleaning solutions can be used to clean pipets and volumetric flasks. Many materials need to be dried prior to analysis to remove residual moisture. Depending on the material, heating to a temperature between 110 oC and 140 oC is usually sufficient. Other materials need much higher temperatures to initiate thermal decomposition.

Conventional drying ovens provide maximum temperatures of 160 oC to 325 oC (depending on the model). Some ovens include the ability to circulate heated air, allowing for a more efficient removal of moisture and shorter drying times. Other ovens provide a tight seal for the door, allowing the oven to be evacuated. In some situations a microwave oven can replace a conventional laboratory oven. Higher temperatures, up to 1700 oC, require a muffle furnace (Figure \(\PageIndex{8}\)). After drying or decomposing a sample, it should be cooled to room temperature in a desiccator to prevent the readsorption of moisture. A desiccator (Figure \(\PageIndex{9}\)) is a closed container that isolates the sample from the atmosphere. A drying agent, called a desiccant, is placed in the bottom of the container. Typical desiccants include calcium chloride and silica gel. A perforated plate sits above the desiccant, providing a shelf for storing samples. Some desiccators include a stopcock that allows them to be evacuated. 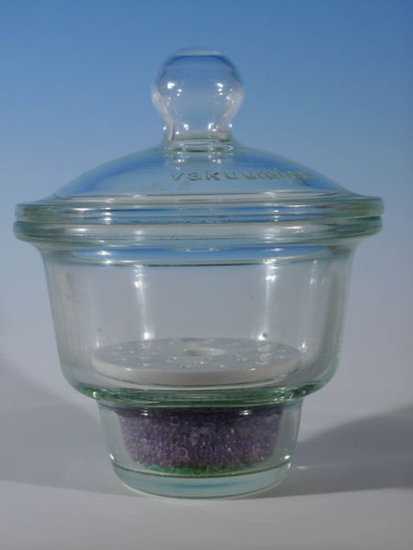 Figure \(\PageIndex{9}\): Example of a desiccator. The solid in the bottom of the desiccator is the desiccant, which in this case is silica gel. Source: Hannes Grobe (commons.wikimedia.org).