Rubber is an example of an elastomer type polymer, where the polymer has the ability to return to its original shape after being stretched or deformed. The rubber polymer is coiled when in the resting state. The elastic properties arise from the its ability to stretch the chains apart, but when the tension is released the chains snap back to the original position. The majority of rubber polymer molecules contain at least some units derived from conjugated diene monomers (see Polymerization of Conjugated Dienes). Such conjugated diene monomers have a constructive backbone of at least four carbon atoms with a double-single-double bond reactive core (C=C-C=C ). Most if not practically all such dienes undergo 1,4-addition to the polymer chain, where 1 and 4 refer to the 1st and 4th carbons of the backbone unit, which become single-bonded to the rest of the polymer chain. The diene's double bonds turn into single bonds, and the single bond between them turns into a Z or E configured double bond, depending on the polymerization conditions. The unit's backbone thus becomes like this (-C-C=C-C-). Rubber gets its elasticity when the formed double bond gets the Z configuration. For 1,3-butadiene, Z is equivalent to a cis and E is equivalent to a trans configuration.

In a number of cases, monomers which are not dienes are also used for certain types of synthetic rubber, often copolymerized with dienes. Some of the most commercially important addition polymers are the copolymers. These are polymers made by polymerizing a mixture of two or more monomers. An example is styrene-butadiene rubber (SBR) - which is a copolymer of 1,3-butadiene and styrene which is mixed in a 3 to 1 ratio, respectively.

SBR rubber was developed during World War II when important supplies of natural rubber were cut off. SBR is more resistant to abrasion and oxidation than natural rubber and can also be vulcanized. More than 40% of the synthetic rubber production is SBR and is used in tire production. A tiny amount is used for bubble-gum in the unvulcanized form.

Nitrile rubber is copolymerized from butadiene and acrylonitrile (H2C=CH-CN). Butyl rubber is copolymerized from isobutylene [which is methylpropene H2C=C(CH3)2 ] and a small percentage of isoprene. Silicone rubber and other compounds, chemically called polysiloxanes, are not from conjugated dienes but have repeating units like -O-SiR2- where R is some organic radical group like methyl. There is a separate page on Silicone Polymers. 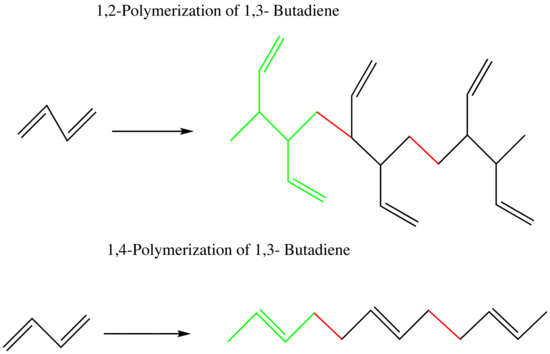 The 3-methyl-3-butenyl pyrophosphate (OPP) is then used in the polymerization of natural rubber as it pulls electrons off 2-methyl-1,3-butadiene (see questions section for this process.)