The reaction of one equivalent of hydrogen bromide with 1,3-butadiene yields different product ratios under different reaction conditions and is a classic example of the concept of thermodynamic versus kinetic control of a reaction.

At lower temperatures the formation of the 1,2 and 1,4 addition products are irreversible and thus do not reach equilibrium. When a reaction is irreversible the major product is determined by the relative reaction rates and not by thermodynamic stability. Of the two products, the formation of the 1,2 addition product has a higher rate of reaction and forms faster making it the major product. The reaction product which forms with a higher rate of reaction is called the Kinetic Product and when the kinetic product dominates, the reaction is said to be under Kinetic Control.

An explanation for the temperature influence is shown in the following energy diagram for the addition of HBr to 1,3-butadiene. The initial step in which a proton bonds to carbon #1 is the rate determining step, as indicated by the large activation energy (light gray arrow). The second faster step is the product determining step, and there are two reaction paths (colored blue for 1,2-addition and magenta for 1,4-addition).

At elevated temperatures, the products are more likely to have enough energy to overcome the reverse activation barrier for the second step allowing regeneration of the carbocation intermediate. Under these conditions, this step of the mechanism will be reversible and an equilibrium will be established. Since the system is no longer limited by temperature, the system will minimize its Gibbs free energy, which is the thermodynamic criterion for chemical equilibrium. This places the reaction under thermodynamic control and the most thermodynamically stable molecule, the 1,4 addition product, will be predominantly formed.

If the reaction temperature is kept sufficiently low, the products will not have enough energy to overcome the reverse activation barrier to regenerate the carbocation intermediate making this step of the mechanism effectively irreversible. This reaction is under kinetic control meaning the product which forms faster, the kinetic product, will predominate.

Of the two reaction pathways, the 1,2-addition has a smaller activation energy and would be expected to have a higher reaction rate than the 1,4-addition. The high reaction rate for 1,2-addition can be attributed to the formation of an ion pair during the reaction mechanism. This means that, after a double bond is protonated, the halide counterion remains in close proximity to the carbocation generated. Immediately following dissociation of , the chloride ion is going to be much closer to than it is to , and therefore attack at is much faster. This ion pair mechanism is a pre-exponential constant effects that is attributed to the proximity and frequency of collision rather than a activation barrier effect.

Experimental Evidence for the Ion-Pair Mechanism

In 1979, Nordlander et al. carried out a similar investigation on the addition of DCl (deuterated hydrochloric acid) to a different substrate, 1,3-pentadiene. This experiment was ingenious, because it was designed to proceed via an almost symmetrical intermediate:

Resonance forms 7a and 7b are both allylic and secondary. There is a very minor difference in their stabilities arising from the different hyperconjugative ability of C-D vs C-H bonds, but in any case, it is not very large. Therefore, if we adopt the explanation in the previous section, one would expect there not to be any major kinetic pathway, and both 1,2- and 1,4-addition products (8 and 9) would theoretically be formed roughly equally.

Instead, it was found that the 1,2-addition product was favored over the 1,4-addition product. For example, at -78oC in the absence of solvent, there was a roughly (75:25) ratio of 1,2- to 1,4-addition products. Clearly, there is a factor that favors 1,2-addition that does not depend on the electrophilicity of the carbon being attacked! The authors attributed this effect to an ion pair mechanism. This means that, after the double bond is protonated (deuterated in this case), the chloride counterion remains in close proximity to the carbocation generated. Immediately following dissociation of DCl, the chloride ion is going to be much closer to C-2 than it is to C-4, and therefore attack at C-2 is much faster. In fact, normal electrophilic addition of HX to conjugated alkenes in polar solvents can also proceed via similar ion pair mechanisms. This is reflected by the greater proportion of syn addition products to such substrates.

1) Why is the 1,4-addition product the thermodynamically more stable product?

2) Addition of 1 equivalent of bromine to 2,4-hexadiene at 0 degrees C gives 4,5-dibromo-2-hexene plus an isomer. What is the structure of that isomer?

3) The kinetically controlled product in the below reaction is:

4) For the reaction above, which product is the result of 1,4-addition?

5) What would be the major product of the addition of HBr to 2,3-dimethyl-1,3-cyclohexadiene under thermodynamic conditions?

6) Consider the reaction with 1,3-buta-diene reacting with HCl. Propose a mechanism for the reaction. Also, Predict why the 1,4 adduct is the major product in this reaction compared to the 1,2.

1) The 1,4- product is more thermodynamically stable because there are two alkyl groups on each side of the double bond and more substituted alkenes are more stable. 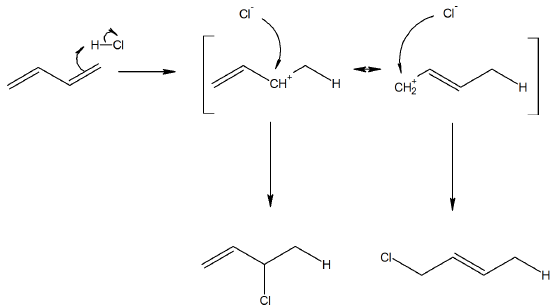