In most cases the resulting gem-diol is unstable relative to the reactants and cannot be isolated. Exceptions to this rule exist, one being formaldehyde where the weaker pi-component of the carbonyl double bond, relative to other aldehydes or ketones, and the small size of the hydrogen substituents favor addition. Thus, a solution of formaldehyde in water (formalin) is almost exclusively the hydrate, or polymers of the hydrate. The addition of electron donating alkyl groups stabilized the partial positive charge on the carbonyl carbon and decreases the amount of gem-diol product at equilibrium. Because of this ketones tend to form less than 1% of the hydrate at equilibrium. Likewise, the addition of strong electron-withdrawing groups destabilizes the carbonyl and tends to form stable gem-diols. Two examples of this are chloral, and 1,2,3-indantrione. It should be noted that chloral hydrate is a sedative and has been added to alcoholic beverages to make a “Knock-out” drink also called a Mickey Finn. Also, ninhydrin is commonly used by forensic investigators to resolve finger prints. 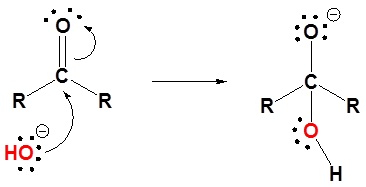 1) Draw the expected products of the following reactions. 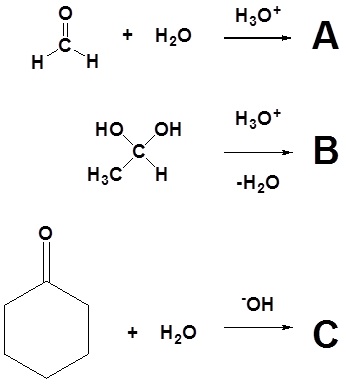 2) Of the following pairs of molecules which would you expect to form a larger percentage of gem-diol at equilibrium? Please explain your answer.

3) Would you expect the following molecule to form appreciable amount of gem-diol in water? Please explain your answer.

2) The compound on the left would. Fluorine is more electronegative than bromine and would remove more electron density from the carbonyl carbon. This would destabilize the carbonyl allowing for more gem-diol to form.

3) Although ketones tend to not form gem-diols this compound exists almost entirely in the gem-diol form when placed in water. Ketones tend to not form gem-diols because of the stabilizing effect of the electron donating alkyl group. However, in this case the electron donating effects of alkyl group is dominated by the presence of six highly electronegative fluorines.