In addition to its preparation from ethylene, ethanol is made by the fermentation of sugars or starch from various sources (potatoes, corn, wheat, rice, etc.). Fermentation is catalyzed by enzymes found in yeast and proceeds by an elaborate multistep mechanism. We can represent the overall process as follows:

Methanol is quite poisonous to humans. Ingestion of as little as 15 mL of methanol can cause blindness, and 30 mL (1 oz) can cause death. However, the usual fatal dose is 100 to 150 mL. The main reason for methanol’s toxicity is that we have liver enzymes that catalyze its oxidation to formaldehyde, the simplest member of the aldehyde family (Section 14.9 "Aldehydes and Ketones: Structure and Names"):

Formaldehyde reacts rapidly with the components of cells, coagulating proteins in much the same way that cooking coagulates an egg. This property of formaldehyde accounts for much of the toxicity of methanol.

Organic and biochemical equations are frequently written showing only the organic reactants and products. In this way, we focus attention on the organic starting material and product, rather than on balancing complicated equations.

Ethanol is oxidized in the liver to acetaldehyde:

The acetaldehyde is in turn oxidized to acetic acid (HC2H3O2), a normal constituent of cells, which is then oxidized to carbon dioxide and water. Even so, ethanol is potentially toxic to humans. The rapid ingestion of 1 pt (about 500 mL) of pure ethanol would kill most people, and acute ethanol poisoning kills several hundred people each year—often those engaged in some sort of drinking contest. Ethanol freely crosses into the brain, where it depresses the respiratory control center, resulting in failure of the respiratory muscles in the lungs and hence suffocation. Ethanol is believed to act on nerve cell membranes, causing a diminution in speech, thought, cognition, and judgment.

Rubbing alcohol is usually a 70% aqueous solution of isopropyl alcohol. It has a high vapor pressure, and its rapid evaporation from the skin produces a cooling effect. It is toxic when ingested but, compared to methanol, is less readily absorbed through the skin.

Polyhydric alcohols in which the hydroxyl groups are situated on different carbons are relatively stable, and, as we might expect for substances with multiple polar groups, they have high boiling points and considerable water solubility, but low solubility in nonpolar solvents:

1,2-Diols are prepared from alkenes by oxidation with reagents such as osmium tetroxide, potassium permanganate, or hydrogen peroxide. However, ethylene glycol is made on a commercial scale from oxacyclopropane, which in turn is made by air oxidation of ethene at high temperatures over a silver oxide catalyst.

Ethylene glycol has important commercial uses. It is an excellent permanent antifreeze for automotive cooling systems because it is miscible with water in all proportions and a 50% solution freezes at —34° (—29°F). It also is used as a solvent and as an intermediate in the production of polymers (polyesters) and other products.

The most important and simplest epoxide is ethylene oxide which is prepared on an industrial scale by catalytic oxidation of ethylene by air. William Morton, a Boston dentist, introduced diethyl ether into surgical practice in 1846. This painting shows an operation in Boston in 1846 in which diethyl ether was used as an anesthetic. Inhalation of ether vapor produces unconsciousness by depressing the activity of the central nervous system. Source: Painting of William Morton by Ernest Board, from http://commons.wikimedia.org/wiki/File:Morton_Ether_1846.jpg.

It is possible to dissolve ionic compounds in organic solvents using crown ethers. Cyclic polyether with four or more oxygen atoms separated by two or three carbon atoms. All crown ethers have a central cavity that can accommodate a metal ion coordinated to the ring of oxygen atoms., cyclic compounds with the general formula (OCH2CH2)n. Crown ethers are named using both the total number of atoms in the ring and the number of oxygen atoms. Thus 18-crown-6 is an 18-membered ring with six oxygen atoms (part (a) in Figure 12.2.4 ). The cavity in the center of the crown ether molecule is lined with oxygen atoms and is large enough to be occupied by a cation, such as K+. The cation is stabilized by interacting with lone pairs of electrons on the surrounding oxygen atoms. Thus crown ethers solvate cations inside a hydrophilic cavity, whereas the outer shell, consisting of C–H bonds, is hydrophobic. Crown ethers are useful for dissolving ionic substances such as KMnO4 in organic solvents such as isopropanol [(CH3)2CHOH] (Figure 12.2.4). The availability of crown ethers with cavities of different sizes allows specific cations to be solvated with a high degree of selectivity.

Figure 12.2.4 Crown Ethers and Cryptands (a) The potassium complex of the crown ether 18-crown-6. Note how the cation is nestled within the central cavity of the molecule and interacts with lone pairs of electrons on the oxygen atoms. (b) The potassium complex of 2,2,2-cryptand, showing how the cation is almost hidden by the cryptand. Cryptands solvate cations via lone pairs of electrons on both oxygen and nitrogen atoms.

Figure 12.2.5. Effect of a Crown Ether on the Solubility of KMnO4 in Benzene. Normally which is intensely purple, is completely insoluble in benzene which has a relatively low dielectric constant. In the presence of a small amount of crown ether, KMnO4 dissolves in benzene as shown by the reddish purple color caused by the permanganate ions in solution.

Cryptands (from the Greek kryptós, meaning “hidden”) are compounds that can completely surround a cation with lone pairs of electrons on oxygen and nitrogen atoms (part (b) in Figure 13.7). The number in the name of the cryptand is the number of oxygen atoms in each strand of the molecule. Like crown ethers, cryptands can be used to prepare solutions of ionic compounds in solvents that are otherwise too nonpolar to dissolve them. 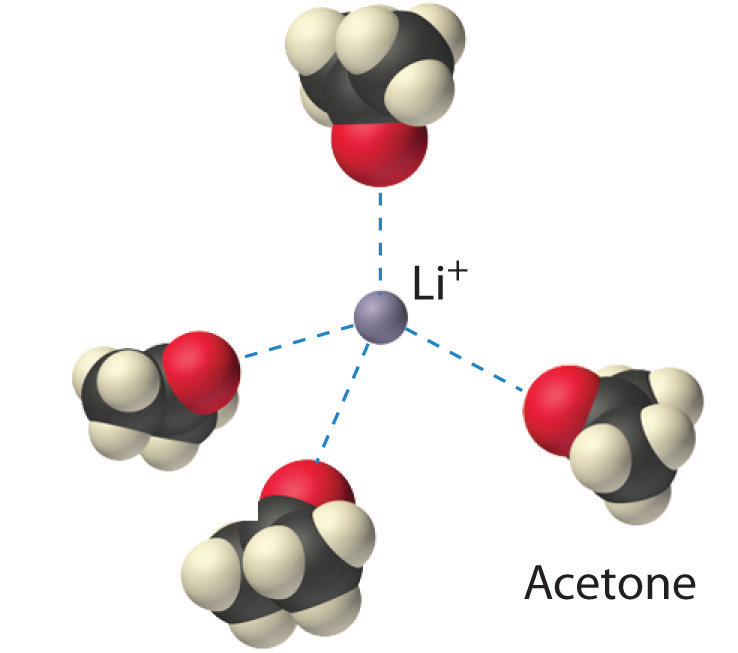 Figure 12.2.3 Ion–Dipole Interactions in the Solvation of Li+ Ions by Acetone, a Polar Solvent