The Chinese shrub Ma Huang (Ephedra vulgaris) contains two physiologically active compounds ephedrine and pseudoephedrine. Both compounds are stereoisomers of 2-methylamino-1-phenyl-1-propanol, and both are optically active, one being levorotatory and the other dextrorotatory. Since the properties of these compounds (see below) are significantly different, they cannot be enantiomers. How, then, are we to classify these isomers and others like them?

Since these two compounds are optically active, each must have an enantiomer. Although these missing stereoisomers were not present in the natural source, they have been prepared synthetically and have the expected identical physical properties and opposite-sign specific rotations with those listed above. The structural formula of 2-methylamino-1-phenylpropanol has two stereogenic carbons (#1 & #2). Each may assume an R or S configuration, so there are four stereoisomeric combinations possible. These are shown in the following illustration, together with the assignments that have been made on the basis of chemical interconversions 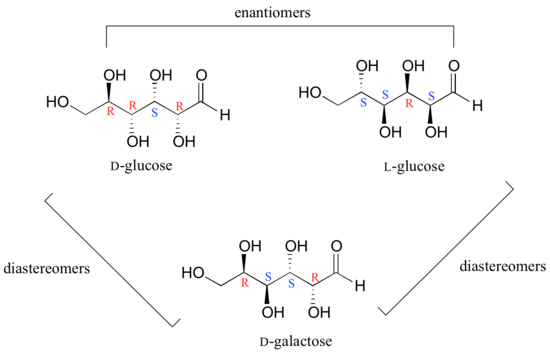