Molecular absorption in the ultraviolet and visible region depends on the electronic structure of the absorbing molecule. Light energy is absorbed in quanta, elevating electrons from filled orbitals in the ground state to empty orbitals. Excited molecules return to the ground state, most often by radiationless transition, the absorbed energy appears in the system as heat. Since the frequency (or wavelength) of light absorbed is characteristic of the energy levels in a molecule, the UV-visible spectrum is often used as a method of qualitative analysis. However, quantitative analysis can also be performed using this technique as is demonstrated in this experiment.

According to Beer's law, the decrease in light intensity observed when monochromatic light passes through an absorbing medium is related to the concentration of the absorbing species by the equation

where \(I_o\) is the incident light intensity, \(I\), the emerging light intensity, \(A\), the absorbance, \(\epsilon\) is the molar absorptivity, \(b\), the path length in cm, and \(c\), the concentration of the absorbing species in moles/L. The transmittance T is defined to be the ratio I / Io so that

(Note that log refers to logarithms to the base 10). The molar absorptivity, \(\epsilon\), is not only characteristic of the absorbing molecule so that it depends on the wavelength of the incident light, but it also depends on the medium in which this molecule is dissolved, that is, on the nature of the solvent. Having established the value of \(\epsilon\) at a given wavelength for a given medium, an unknown concentration of the absorbing molecule can be determined by measuring A in a cell of fixed geometry.

Just as you used visible spectroscopy to identify and quantify metal ions in solution in general chemistry lab, you can use UV-visible spectroscopy to measure protein concentrations in solution. Proteins are extremely important molecules in biochemistry. They make up a large portion of the human body, playing both a structural role and as important catalysts for biochemical reactions. Understanding protein function is a key to understanding life itself and the molecular basis of disease. Proteins are large polymers of many of the 20 amino acids. Figure 1 shows the chemical structure of each of the 20 amino acids. The pKa for the ionizable side chains are also given in the figure. The side chains are connected by amide linkages between the amino acids. There is a free amino and free carboxylic acid group at each end. Figure 2 Several methods are used to measure protein concentrations. Some methods are direct and others are indirect. One can measure the UV absorbance of the solution at 250-300 nm, a direct method. The indirect assay, usually called a colorimetric assay, takes advantage of a color change of a compound upon binding to the protein.

Using the absorbance at 280 nm is the simplest method. The aromatic side chains phenylalanine, tyrosine and tryptophan absorb UV radiation in the range of 250-300 nm. Figure 2 shows the UV absorbance spectra of phenylalanine, tyrosine and tryptophan. The extinction coefficient of a pure protein can be calculated from the number of tyrosine and tryptophan residues in the amino acid sequence. The extinction coefficients at 280 nm for the isolated amino acid side chains are 1200 M-1 cm-1 for tyrosine and 5600 M-1 cm–1 for tryptophan. If you know the sequence of the protein of interest and know that it is pure, you can use the absorbance at 280 nm to determine the concentration of your protein. If you have a mixture of proteins and want to know the total concentration of protein in the solution, in milk for example, this method would not work because you cannot calculate the extinction coefficient for a mixture of proteins. You can get a relative measure of the amount of protein present in solutions. The solution with the highest absorbance at 280 nm had the greatest protein concentration. This is a rash generalization because a dilute solution of a protein that contains many aromatic residues will have a greater absorbance than a more concentrated solution of a protein with few aromatic amino acids. 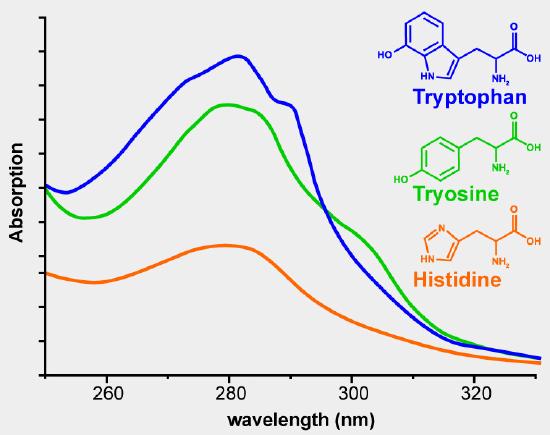 Colorimetric assays for protein have been developed to get around this problem. These assays use a compound that changes color in the presence of protein.

There are many different compounds that are used. Two of the most important properties for the compound are: 1) that they interact with all proteins similarly and 2) that the absorbance spectrum of the unbound compound does not significantly overlap with the spectrum of the complex. The reagent coomassie brilliant blue is a blue dye that binds tightly to most proteins. There are 3 forms of coomassie blue that are in equilibrium with each other at low pH. In very acidic solutions the red form, positively charged of the dye is most stable above pH=2 the blue form, negatively charged blue form is more stable. Figure 3 shows the structure of the red and blue forms of coomassie brilliant blue. The intermediate neutral form is stable over a very narrow pH range and is difficult to stabilize, except in the presence of detergents.

In this laboratory exercise you will measure the concentration of a BSA solution by both methods. Keep in mind that the two methods are completely unrelated and there is no reason to expect the same absorbance readings for both assays on the same sample.

Record absorbance spectra of the red and blue forms of coomassie blue. Do this on Day one of the experiment The red form at low pH: Prepare 10ml of a 0.02mM solution of coomassie blue by diluting the appropriate amount of the stock solution provided (concentration is given on the bottle) with 2.5M HCl. What volume of 0.1mM coomassie blue would you use? What is the pH of the resulting solution? The Blue form at pH 7: Prepare 10ml of a 0.02mM dye solution by diluting the appropriate volume of the stock solution with pH 7 buffer.

Simple Instructions for Operation of HP-8452A 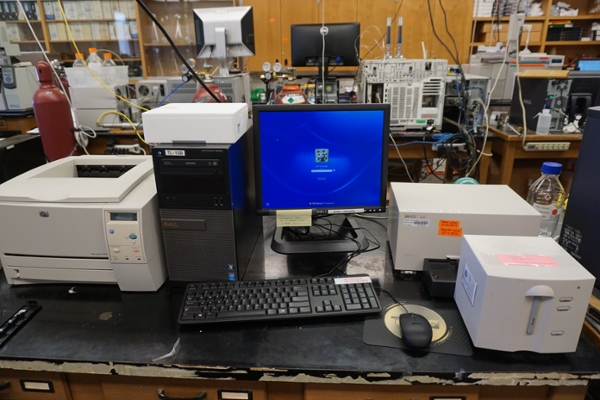 To determine the concentration of a protein solution you must first prepare a series of protein solutions of known concentration and construct a standard absorbance curve. Using the 2.00mg/ml stock solution prepare 10 ml of each of the following solutions. Use deionized water to make the solutions to volume. Day one, make the standard solutions. They are stable. You will do the assay on day 2 of the experiment.

Before coming to class calculate the volume of the 2.0 mg/ml stock solution you need for each solution. And complete this table:

UV spectrum of the unknown: Do this on day two of the experiment

Collect a UV spectrum of the unknown protein solution from 240nm to 340 nm. Use water as the blank. The molar absorptivity for bovine serum albumin (BSA) at 280 nm is 43,600 M-1cm-1. The molecular weight of BSA is 66,300 g/mol. Determine the absorbance at 280 nm calculate the concentration and compare it to that which you measure by the dye binding assay.

Analysis of the Data