Optical isomers are stereoisomers that are related via non-superimposable mirror images of each other. They differ from geometric stereoisomers in that they rotate the polarization of plane-polarized light. These isomers are referred to as enantiomers or chiral.

A polarimeter is a scientific instrument used to measure the angle of rotation caused by passing polarized light through an optically active substance. Some chemical substances are optically active, and polarized (uni-directional) light will rotate either to the left (counter-clockwise) or right (clockwise) when passed through these substances. The amount by which the light is rotated is known as the angle of rotation. The polarimeter is made up of a polarizer (#3 on Figure \(\PageIndex{1}\)) and an analyzer (#7 on Figure \(\PageIndex{1}\)). The polarizer allows only those light waves which move in a single plane. This causes the light to become plane polarized. When the analyzer is also placed in a similar position it allows the light waves coming from the polarizer to pass through it. When it is rotated through the right angle no waves can pass through the right angle and the field appears to be dark. If now a glass tube containing an optically active solution is placed between the polarizer and analyzer the light now rotates through the plane of polarization through a certain angle, the analyzer will have to be rotated in same angle.

The observed rotations (α) of enantiomers are opposite in direction. One enantiomer will rotate polarized light in a clockwise direction, termed dextrorotatory or (+), and its mirror-image partner in a counter-clockwise manner, termed levorotatory or (–). The prefixes dextro and levo come from the Latin dexter, meaning right, and laevus, for left, and are abbreviated d and l respectively. A 50:50 mixture of enantiomers has no observable optical activity. Such mixtures are called racemates or racemic modifications.

Non-superimposable means the structure cannot be rotated in a way that one can be put on top of another.

To use mirror image method, we draw the 3D structure for this geometric isomer (not the mer isomer) and then take a mirror image like below. The left image can be rotated by 180° through a vertical axis to superimpose on the orginal. So the mer-\(\ce{[OsCl_3(CO)_3]^{-}}\) complex ion is not optically active or we can call it achiral. Consider the octahedral complex with six monodentate ligands \(\ce{MA_2B_2C_2}\) have both cis and trans isomers. However, the cis isomer will also have two optical isomers (Figure \(\PageIndex{2}\)). No matter how one rotates one of the mirror images, they are are not superimposable.

Confirm to yourself that if two like ligands in \(\ce{MA2B2C2}\) are trans to each other, then the complex will not have an optical isomer.

If two like ligands are trans then there will be a mirror plane of symmetry normal to the line connecting the ligands that are trans to each other. The presence of the mirror plane means this complex will not have an optical isomer.

The "Plane of Symmetry Method" to Determine Optical Isomers

Consider the tetrahedral molecule, CHBrClF. Is this molecule optically active? 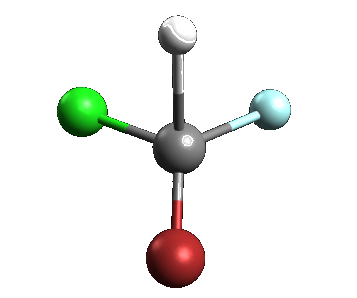 Optical isomers have no plane of symmetry. For tetrahedral complexes, this is fairly easy to recognize the possibility of this by looking for a center atom with four different things attached to it. Unfortunately, this is not quite so easy with more complicated geometries! The examples you are most likely to need occur in octahedral complexes that contain bidentate ligands, e.g., complex ions like \(\ce{[Ni(NH_2CH_2CH_2NH_2)_3]^{2+}}\) or \(\ce{[Cr(C_2O_4)_3]^{3-}}\). In bidentate complexes or chelating complexes, a ligand binds very tightly to the metal because it holds onto the metal via more than one atom. Ethylenediamine is one example of a bidentate ligand.

As you may expect, bidentate ligands bind tightly to metals because they form two bonds with it, rather than just one. It is also important to recognize that in an octahedral complex, the two donor atoms in most bidentate ligand bind cis to each other and cannot reach all the way around the molecule to bind trans to each other (see below). The diagram below shows a simplified view of one of the complex ions with three oxalato ligands (also a bidentate ligand), however, they all have the same shape - all that differs is the nature of the "headphones".

A substance with no plane of symmetry is going to have optical isomers - one of which is the mirror image of the other. One of the isomers will rotate the plane of polarization of plane polarized light clockwise; the other rotates it counter-clockwise. In this case, the two isomers are:

Most, but not all, Bidentate Ligands Bind to Metals in the cis Orientation

A wide variety of bidentate ligands bind to metals in the cis fashion, but few can bind in the trans geometry. These are called trans-spanning ligands and required building a bridge between the bonding atoms (e.g. methylene brindges \(\ce{-CH2CH2CH2CH2 -}\)).

We will not consider any trans-spanning ligands in this text.

A complex containing three bidentate ligands can take on the shape of a left-handed propeller or a right-handed propeller. You may be able to see that there is no way of rotating the second isomer in space so that it looks exactly the same as the first one. As long as you draw the isomers carefully, with the second one a true reflection of the first, the two structures will be different.

These kinds of complexes were historically important in demonstrating how small molecules and ions bound to metal cations. By showing that some metal complexes were chiral and displayed optical activity, early 20th century workers such as Alfred Werner were able to rule out some competing ideas about the structures of metal compounds. Today, we know that metal complexes play important roles in enzymes in biology, and Werner's work on metal complexes laid the groundwork for how we think about these complexes. In addition, stereochemistry in metal complexes became very important in the late 20th century, especially as pharmaceutical companies looked for catalysts that could aid in the production of one enantiomer of a drug, and not the other, in order to maximize pharmaceutical effectiveness and minimize side effects.

Identify the relationships (types of isomers) between the following pairs of iron(III) oxalate ions.