After completing this section, you should be able to identify deoxy and amino sugars, given their structures.

The sugars in the backbone of DNA

The backbone of DNA is based on a repeated pattern of a sugar group and a phosphate group. The full name of DNA, deoxyribonucleic acid, gives you the name of the sugar present - deoxyribose. Deoxyribose is a modified form of another sugar called ribose. I'm going to give you the structure of that first, because you will need it later anyway. Ribose is the sugar in the backbone of RNA, ribonucleic acid.

This diagram misses out the carbon atoms in the ring for clarity. Each of the four corners where there isn't an atom shown has a carbon atom. The heavier lines are coming out of the screen or paper towards you. In other words, you are looking at the molecule from a bit above the plane of the ring.

So that's ribose. Deoxyribose, as the name might suggest, is ribose which has lost an oxygen atom - "de-oxy".

The only other thing you need to know about deoxyribose (or ribose, for that matter) is how the carbon atoms in the ring are numbered. The carbon atom to the right of the oxygen as we have drawn the ring is given the number 1, and then you work around to the carbon on the CH2OH side group which is number 5.

You will notice that each of the numbers has a small dash by it - 3' or 5', for example. If you just had ribose or deoxyribose on its own, that wouldn't be necessary, but in DNA and RNA these sugars are attached to other ring compounds. The carbons in the sugars are given the little dashes so that they can be distinguished from any numbers given to atoms in the other rings. You read 3' or 5' as "3-prime" or "5-prime".

An amino sugar (or more technically a 2-amino-2-deoxysugar) is a sugar molecule in which a hydroxyl group has been replaced with an amine group. More than 60 amino sugars are known, with one of the most abundant being N-acetylglucosamine, which is the main component of chitin. 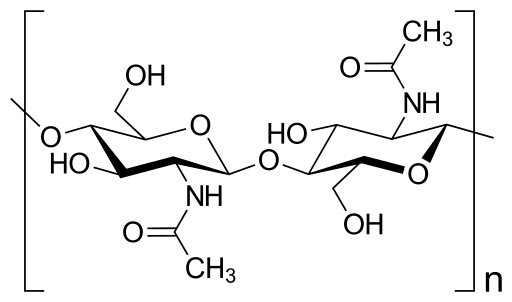 Structure of the chitin molecule, showing two of the N-acetylglucosamine units that repeat to form long chains in β-(1→4)-linkage.

Chitin is is a polymer of N-acetylglucosamine and is found in many places throughout the natural world. It is a characteristic component of the cell walls of fungi, the exoskeletons of arthropods such as crustaceans (e.g., crabs, lobsters and shrimps) and insects, the radulae of molluscs, and the beaks and internal shells of cephalopods, including squid and octopuses and on the scales and other soft tissues of fish and lissamphibians.