The majority of molecules or complex ions discussed in general chemistry courses are demonstrated to have pairs of electrons. However, there are a few stable molecules which contain an odd number of electrons. These molecules, called "free radicals", contain at least one unpaired electron, a clear violation of the octet rule. Free radicals play many important roles a wide range of applied chemistry fields, including biology, medicine, and environmental chemistry. Three well-known examples of such molecules are nitrogen monoxide, nitrogen dioxide, and chlorine dioxide. The most plausible Lewis structures for these molecules are

In this course, you need to be concerned with identifying free radical species. It is not necessary for you to know where to place the spare electron. In addition, please focus on the problems with free radicals that are discussed in the sections below.

The two nitrogen-containing compounds above are classified as being \(\ce{NO_{X}s}\). These free radicals are produced from high-temperature combustion of fuel by vehicles and industry. \(\ce{NO_{X}s}\) can also be produced by natural processes. For example, lightning and volcanic eruptions produce these species. These gases do differ from one another. Nitrogen monoxide (also known as nitric oxide) is a colorless and non-flammable gas. In contrast, nitrogen dioxide is a reddish-orange gas that is extremely flammable. Nitrogen monoxide has a slight odor, while nitrogen dioxide has a very sharp, acrid smell.

Once \(\ce{NO_{X}s}\) are produced, they can react with ultraviolet light to produce more free radicals. After a series of reactions, these species produce ground-level ozone (\(\ce{O3}\)) which is referred to as smog. In regards to the environment, smog reduces visibility and smog precursors \(\ce{NO_{X}s}\) and \(\ce{SO_{X}s}\) react with water to produce acid rain. As for humans, \(\ce{NO_{X}s}\) can affect lung, heart, and immunity functioning. Photochemical smog is more of an issue in highly populated cities that rely heavily on transportation sources and electrical power plants. Fortunately, the United States Environmental Protection Agency (EPA) regulates \(\ce{NO_{X}s}\) amounts for vehicles and power plants. 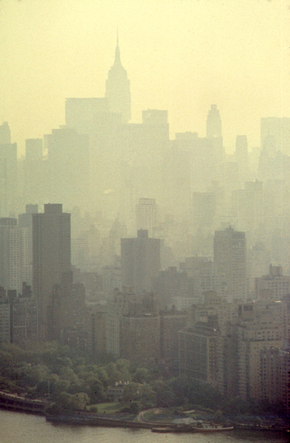 Figure \(\PageIndex{2}\): Arial photograph of photochemical smog in Manhattan, New York. Documerica was a program sponsored by the Environmental Protection Agency to photographically document subjects of environmental concern in America during the 1970s.

Consumers of American cars can review smog ratings before purchasing a vehicle. Cars and trucks produce other chemicals besides NOxs that contribute to smog formation. For a basic rating on smog-producing ability, click here and input your vehicle's information. On this website, smog ratings are assigned to mobile sources (cars, trucks, sports utility vehicles) from one to ten. A low score indicates that the vehicle produces a large number of smog precursors.

Ozone or O3 can be harmful or helpful depending on where it is located. In the troposphere (see image below), ozone is referred to as smog. This particular species can be formed from free radicals. Previously, you have learned the harmful effects of being exposed to ground level ozone. However, ozone acts as a protective shield in the stratosphere. Of the three forms of ultraviolet radiation, ozone completely screens the Earth's surface from UV-C radiation. Portions of UV-B (causes more burning of skin) and UV-A (causes more tanning of skin) still reaches the terrestrial environment.

If all the ozone in the atmosphere were combined, it would have a thickness of less than 0.5 cm (.20 inches). Ozone is most concentrated in the lowest 15 km portion of the stratosphere. NASA and other atmospheric scientists utilize the Dobson scale to represent the concentration of ozone molecules. One Dobson Unit (DU) is the number of ozone molecules that could create a 0.01 mm layer of thickness (conditions of 0ºC and 1.0 atm). NASA reports the average thickness of the ozone layer to be 300 DU which translates to 3 mm. A depleted ozone layer would register as being equal to or less than 100 DU or a thickness of 1 mm. The NASA image below depicts a purplish-blue region that corresponds to the largest area of ozone depletion. First detected in 1985, the ozone hole has grown to a maximum of 7.6 million square miles (or 2.5 times the size of the United States. NASA reported this peak value on September 11, 2017.

Ozone is made and decomposed naturally via the Chapman cycle. In the stratosphere, ultraviolet light breaks the double bond of the diatomic oxygen molecule. From this reaction, spare oxygen (O) atoms encounter more diatomic oxygen (O2) molecules to produce ozone. Ultraviolet light can attack ozone molecules BY CLEAVING ONE oxygen bond in the structure. This natural cycle of ozone production and decomposition repeats in the Chapman Cycle.

Watch The following video and then answer the questions below:

Ozone (\(\ce{O_3}\)), which this molecule has a single and a double bond. The single bond is much weaker and longer. It would be easier to break this bond.

CFCs are organic compounds that contain different combinations of carbon, chlorine, fluorine, and sometimes hydrogen. The chlorine portion is particularly toxic to the ozone layer.

Chlorine gas or chlorine that is used to disinfect drinking water is not a CFC.

When ultraviolet light hits a CFC, chlorine is freed and becomes a free radical. This reactive species attacks the ozone molecule at the single bond location. Chlorine atom has seven valence electrons.

Both poles contain areas that are lacking in \(\ce{O3}\).

The CFCS used in northern hemisphere eventually migrated to the cold areas of Antarctica. The temperatures in this area catalyze (speed up) the free radical reactions. This produces more chlorine atoms that will attack ozone molecules.

The hole is shrinking!

Before the 1920's, the mechanism of chemical refrigeration required such toxic chemicals as ammonia or sulfur dioxide. Frigidaire scientists focused on synthesizing safer compounds to be used in this industry. This research lead to the production of CFCs or compounds that contained a combination of chlorine, carbon, and fluorine. Chemists found these colorless liquids to be very volatile and inert. By the 1970's, the chemical industry was producing one million tons a year of these chemicals to be used as refrigerants, propellants, and foaming agents.

Perhaps the most common CFC made was dichlorodifluoromethane. This CFC is also known as Freon-12 and was used as a refrigerant for cars, commercial, and industrial air conditioning systems. Today, the United States is no longer able to make this compound and distributors must have a Freon license to distribute existing supplies. Even though you might use the term "freon" to describe air conditioning coolant, you are not using this particular chemical due to environmental restrictions.

In the early to late 1970's, many international studies determined CFCs and other halons (once used as fire retardants), particularly those containing bromine, contributed to the destruction of the ozone layer. It was not until the mid-1980's that an international treaty was formulated to reduce the production of certain ODS (ozone depleting substance). In 1987, over 190 countries signed the Montreal Protocol. Upon signature, countries would agree to reduce and then eliminate ODS chemicals that contained chlorine or bromine. Countries that could not afford to find suitable replacements for ODS would be given time extensions and funding.

Even though freon production in the United States has halted, this chemical is still used in refrigeration systems that cannot switch to ozone-friendly replacements. This has opened an illegal smuggling of freon into countries that have signed the Montreal Protocol. In the United States, freon smuggling is an environmental crime. Violators that have been prosecuted have paid fines and/or served time in prison. Read the article in this link and record main ideas regarding EPA/s Operation Cool Breeze.

The United States and several other countries replaced many CFCs with HCFC compounds. By adding hydrogen, this allowed a CFC compound to retain its chlorine atoms. In other words, ultraviolet light would not be able to break the C-Cl bond releasing a chlorine free radical. Unfortunately, HCFCs were found to have higher global warming potentials (GWP) and would need to be phased out as well. For most countries, this HCFC reduction would occur in 2010. During this time, countries substituted HFCs for both HCFC and CFC compounds. HFCs have the lowest OD potential but still, have high GWP. Today, countries are focusing on finding more environmentally friendly replacements for these chemicals as well. Keep in mind, each chemical substitution that has been mentioned is costly and still affects the environment.

Free radical formation from the cleavage (breaking) of the C-Cl bond by ultraviolet light can be seen in the reactions below. It is not important for you to memorize these series of reactions. However, it should be noted that chlorine and bromine cause ozone depletion when they are freed from ozone-depleting substances.

The chlorine atom so obtained reacts with another ozone molecule. Hence, steps \ref{ii} and \ref{iii} are repeated again and again and, leads to the depletion of concentration of ozone.

International policy efforts to restrict production of ozone depleting CFCs culminated in the 1987 treaty known as the Montreal Protocol in which signing nations agreed to cut CFC production in half by 1998. At least five follow-up agreements since then helped to deepen the cuts, advanced timetables for compliance, and addressed additional ozone-depleting substances such as halons, methyl chloroform, carbon tetrachloride, and hydrochlorofluorocarbons (HCFCs). Most countries around the world have phased out production of the substances covered by the agreements and industry has been able to shift to safer alternative chemicals. As a result, there’s evidence that the Antarctic ozone hole has stopped growing worse, although recovery is not expected anytime soon. Phasing out CFCs and HCFCs is also beneficial in protecting the earth's climate, as these substances are also very damaging greenhouse gases.

As part of the United States' commitment to implementing the Montreal Protocol, the U.S. Congress amended the Clean Air Act (section 6.7), adding provisions for protection of the ozone layer. Most importantly, the amended Act required the gradual end to the production of chemicals that deplete the ozone layer. The Clean Air Act amendments passed by Congress requires the Environmental Protection Agency (EPA) to develop and implement regulations for the responsible management of ozone-depleting substances in the United States. Under the Clean Air Act, EPA has created several regulatory programs to address numerous issues, including: