Electricity is an important form of energy that you use every day. It runs your calculators, cell phones, dishwashers, and watches. This form of energy involves moving electrons through a wire and using the energy of these electrons. Electrochemical cells used for power generation are called batteries. Although batteries come in many different shapes and sizes, there are a few basic types. You won't be required to remember details of the batteries, but some general information and features of each type are presented here. Many important chemical reactions involve the exchange of one or more electrons, and we can use this movement of electrons as electricity; batteries are one way of producing this type of energy. The reactions that drive electricity are called oxidation-reduction (or "redox") reactions.

Reactions in which electrons are transferred are called oxidation-reduction (or "redox") reactions. There are two parts to these changes: one atom must lose electrons and another atom must gain them. These two parts are described by the terms "oxidation" and "reduction".

Originally, a substance was said to be oxidized when it reacted with oxygen. Today, the word "oxidized" is still used for those situations, but now we have a much broader second meaning for these words. Today, the broader sense of the word oxidation is defined as losing electrons. When a substance loses electrons, its charge will increase. This may feel a bit backwards, but remember that electrons are negative. If an atom loses electrons, it is losing negative particles—so its charge will increase.

The other half of this process, the gaining of electrons, also needs a name. When an atom or an ion gains electrons, the charge on the particle goes down. For example, if a sulfur atom whose charge is zero \(\left( 0 \right)\) gains two electrons, its charge becomes \(\left( -2 \right)\); if an \(\ce{Fe^{3+}}\) ion gains an electron, its charge changes from \(+3\) to \(+2\). In both cases, the charge on the particle is reduced by the gain of electrons. Remember that electrons have a negative charge, so gaining electrons will result in the charge decreasing. The word reduction is defined to mean gaining electrons and the reduction of charge.

In this reaction, the silver ions are gaining electrons to become silver atoms. Therefore, the silver ions are being reduced and the charge of silver is decreasing. The copper atoms are losing electrons to become copper \(+2\) ions, are therefore being oxidized, and the charge of copper is increasing. Whenever a chemical reaction involves electrons being transferred from one substance to another, the reaction is an oxidation-reduction reaction (or a redox reaction).

Half-equations are very helpful in discussing and analyzing processes, but half-reactions cannot occur as they appear. The half-reactions for the reaction above would be:

For each reaction, identify what is oxidized and what is reduced.

a) This reaction written with charges is:

b) This reaction written with charges is:

c) This reaction written with charges is:

Batteries are devices that use chemical reactions to produce electrical energy. These reactions occur because the products contain less potential energy in their bonds than the reactants. The energy produced from excess potential energy not only allows the reaction to occur, but also often gives off energy to the surroundings. Some of these reactions can be physically arranged so that the energy given off is in the form of an electric current. These are the type of reactions that occur inside batteries. When a reaction is arranged to produce an electric current as it runs, the arrangement is called an electrochemical cell or a Galvanic Cell. 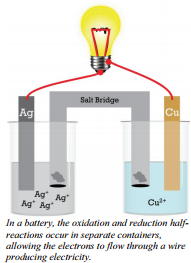 If a strip of copper is placed in a solution of silver nitrate, the following reaction takes place:

As the reaction occurs, an observer would see the solution slowly turn blue (\(\ce{Cu^{2+}}\) ions are blue in solution) and a mass of solid silver atoms would build up on the copper strip.

The reaction we just described is not set up in such a way as to produce electricity. It is true that electrons are being transferred, but to produce electricity, we need electrons flowing through a wire so that we can use the energy of these electrons. This reaction, \(2 \ce{Ag^+} \left( aq \right) + \ce{Cu} \left( s \right) \rightarrow 2 \ce{Ag} \left( s \right) + \ce{Cu^{2+}} \left( aq \right)\), is one that could be arranged to produce electricity. To do this, the two half-reactions (oxidation and reduction) must occur in separate compartments, and the separate compartments must remain in contact through an ionic solution and an external wire.

In this electrochemical cell, the copper metal must be separated from the silver ions to avoid a direct reaction. Each electrode in its solution could be represented by a half-reaction.

The wire connects the two halves of the reaction, allowing electrons to flow from one metal strip to the other. In this particular example, electrons will flow from the copper electrode (which is losing electrons) into the silver electrode (which is where the silver ions gain the electrons). The cell produces electricity through the wire and will continue to do so as long as there are sufficient reactants (\(\ce{Ag^+}\) and \(\ce{Cu}\)) to continue the reaction. If the light bulb is removed from the circuit with the electrochemical cell and replaced with a voltmeter, the voltmeter will measure the voltage (electrical potential energy per unit charge) of the combination of half-cells. The size of the voltage produced by a cell depends on the temperature, the metals used for electrodes, and the concentrations of the ions in the solutions. If you increase the concentration of the reactant ion (not the product ion), the reaction rate will increase and so will the voltage.

It may seem complicated to construct an electrochemical cell due to all of their complexities. Electrochemical cells are actually easy to make and sometimes even occur accidentally. If you take two coins of different denomination, push them part way through the peel of a whole lemon, and then connect the two coins with a wire, a small electric current will flow.