Neutral atoms and their associated ions have very different physical and chemical properties. Sodium atoms form sodium metal, a soft, silvery-white metal that burns vigorously in air and reacts explosively with water. Chlorine atoms form chlorine gas, Cl2, a yellow-green gas that is extremely corrosive to most metals and very poisonous to animals and plants. The vigorous reaction between the elements sodium and chlorine forms the white, crystalline compound sodium chloride, common table salt, which contains sodium cations and chloride anions (Figure 1). The compound composed of these ions exhibits properties entirely different from the properties of the elements sodium and chlorine. Chlorine is poisonous, but sodium chloride is essential to life; sodium atoms react vigorously with water, but sodium chloride simply dissolves in water.

Figure 1. (a) Sodium is a soft metal that must be stored in mineral oil to prevent reaction with air or water. (b) Chlorine is a pale yellow-green gas. (c) When combined, they form white crystals of sodium chloride (table salt). (credit a: modification of work by “Jurii”/Wikimedia Commons)

As all substances must be electrically neutral, the total number of positive charges on the cations of an ionic compound must equal the total number of negative charges on its anions. The formula of an ionic compound represents the simplest ratio of the numbers of ions necessary to give identical numbers of positive and negative charges. For example, the formula for aluminum oxide, Al2O3, indicates that this ionic compound contains two aluminum cations, Al3+, for every three oxide anions, O2- [thus, (2 × +3) + (3 × –2) = 0].

It is important to note, however, that the formula for an ionic compound does not represent the physical arrangement of its ions. It is incorrect to refer to a sodium chloride (NaCl) “molecule” because there is not a single ionic bond, per se, between any specific pair of sodium and chloride ions. The attractive forces between ions are isotropic—the same in all directions—meaning that any particular ion is equally attracted to all of the nearby ions of opposite charge. This results in the ions arranging themselves into a tightly bound, three-dimensional lattice structure. Sodium chloride, for example, consists of a regular arrangement of equal numbers of Na+ cations and Cl– anions (Figure 2). 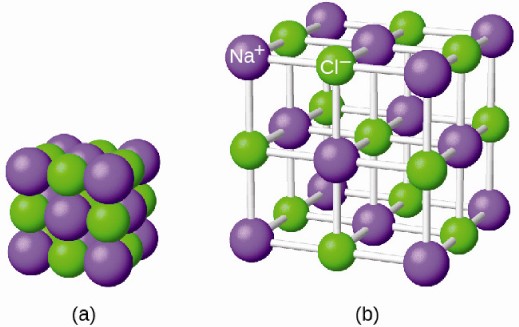 Figure 2. The atoms in sodium chloride (common table salt) are arranged to (a) maximize opposite charges interacting. The smaller spheres represent sodium ions, the larger ones represent chloride ions. In the expanded view (b), the geometry can be seen more clearly. Note that each ion is “bonded” to all of the surrounding ions—six in this case.

Exceptions to the expected behavior involve elements toward the bottom of the groups. In addition to the expected ions Tl3+, Sn4+, Pb4+, and Bi5+, a partial loss of these atoms’ valence shell electrons can also lead to the formation of Tl+, Sn2+, Pb2+, and Bi3+ ions. The formation of these 1+, 2+, and 3+ cations is ascribed to the inert pair effect, which reflects the relatively low energy of the valence s-electron pair for atoms of the heavy elements of groups 13, 14, and 15. Mercury (group 12) also exhibits an unexpected behavior: it forms a diatomic ion, (an ion formed from two mercury atoms, with an Hg-Hg bond), in addition to the expected monatomic ion Hg2+ (formed from only one mercury atom).

There are at least 14 elements categorized as “essential trace elements” for the human body. They are called “essential” because they are required for healthy bodily functions, “trace” because they are required only in small amounts, and “elements” in spite of the fact that they are really ions. Two of these essential trace elements, chromium and zinc, are required as Cr3+ and Zn2+. Write the electron configurations of these cations.
[reveal-answer q=”807563″]Show Answer[/reveal-answer]
[hidden-answer a=”807563″]

Selenium and iodine are two essential trace elements that form anions. Write the electron configurations of the anions.
[reveal-answer q=”348167″]Show Answer[/reveal-answer]
[hidden-answer a=”348167″]

1. The protons in the nucleus do not change during normal chemical reactions. Only the outer electrons move. Positive charges form when electrons are lost.

5. The predicted charges are as follows:

7. The correct electron configurations are

9. The correct electron configurations are

inert pair effect: tendency of heavy atoms to form ions in which their valence s electrons are not lost

ionic bond: strong electrostatic force of attraction between cations and anions in an ionic compound