Acetylcholine is an organic chemical that functions in the brain and body of many types of animals, including humans, as a neurotransmitter—a chemical released by nerve cells to send signals to other cells. Its name is derived from its chemical structure: it is an ester of acetic acid and choline. Parts in the body that use or are affected by acetylcholine are referred to as cholinergic. Substances that interfere with acetylcholine activity are called anticholinergics.

In the brain, acetylcholine functions as a neurotransmitter and as a neuromodulator. The brain contains a number of cholinergic areas, each with distinct functions. They play an important role in arousal, attention, memory and motivation.

When a normally functioning motor nerve is stimulated, it releases the neurotransmitter acetylcholine, which transmits the impulse to a muscle or organ.

1. During neurotransmission (Figure \(\PageIndex{1}\)), ACh is released from the presynaptic neuron into the synaptic cleft and binds to ACh receptors on the post-synaptic membrane, relaying the signal from the nerve. 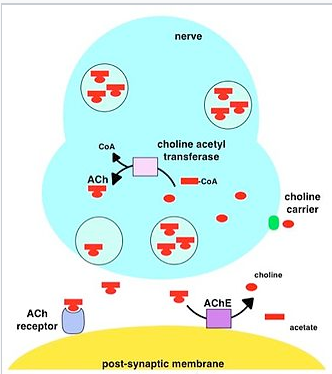 3. The liberated choline is taken up again by the pre-synaptic neuron and ACh is synthesized by combining with acetyl-CoA through the action of choline acetyltransferase.[19][20]

Nerve Poisons and the Acetylcholine Cycle

Botulinum toxin (Botox) is a neurotoxic protein produced by the bacterium Clostridium botulinum and related species.[1] It prevents the release of the neurotransmitter acetylcholine from axon endings at the neuromuscular junction and thus causes flaccid paralysis.[2]The toxin causes the disease botulism. The toxin is also used commercially for medical and cosmetic purposes.

Foodborne botulism can be transmitted through food that has not been heated correctly prior to being canned, or food from a can that has not been cooked correctly. Most infant botulism cases cannot be prevented because the bacteria that cause this disease are in soil and dust. The bacteria can also be found inside homes on floors, carpet, and countertops, even after cleaning. Honey can contain the bacteria that cause infant botulism, so children less than 12 months old should not be fed honey. Curare is a generic term for various South American arrow poisons. The main active ingredient in curare is d-tubocurarine (Figure \(\PageIndex{4}\)), which has the chemical structure shown below.

In brief, d-tubocurarine, blocks competitively the transmitter action of acetylcholine. When the drug is applied directly to the end-plate of a single isolated muscle fiber under microscopic control, the muscle cell becomes insensitive to motor-nerve impulses and to direct applied acetylcholine; however, the end -plate region and the remainder of the muscle fiber membrane retain their normal sensitivity to the application of potassium ions, and the muscle fiber still responds to direct electrical stimulation. Because acetylcholine release into the neuromuscular junction muscle is what initiates contraction, curare causes muscle relaxation and paralysis.

Poisoning by a nerve agent leads to constriction of pupils, profuse salivation, convulsions, and involuntary urination and defecation, with the first symptoms appearing in seconds after exposure. Death by asphyxiation or cardiac arrest may follow in minutes due to the loss of the body's control over respiratory and other muscles. Some nerve agents are readily vaporized or aerosolized, and the primary portal of entry into the body is the respiratory system. Nerve agents can also be absorbed through the skin, requiring that those likely to be subjected to such agents wear a full body suit in addition to a respirator.

Nerve agents are generally colorless to amber-colored, tasteless liquids that may evaporate to a gas. Agents Sarin and VX are odorless; Tabun has a slightly fruity odor and Soman has a slight camphor odor.[1]

Organophosphorous Compounds as Insecticides and Weapons of War

This first class of nerve agents, the G-series, was accidentally discovered in Germany on December 23, 1936, by a research team headed by Gerhard Schrader working for IG Farben. Since 1934, Schrader had been working in a laboratory in Leverkusen to develop new types of insecticides for IG Farben. While working toward his goal of improved insecticide, Schrader experimented with numerous compounds, eventually leading to the preparation of tabun (GA).

In experiments, tabun was extremely potent against insects: as little as 5 ppm of tabun killed all the leaf lice he used in his initial experiment. In January 1937, Schrader observed the effects of nerve agents on human beings first-hand when a drop of tabun spilled onto a lab bench. Within minutes he and his laboratory assistant began to experience miosis (constriction of the pupils of the eyes), dizziness and severe shortness of breath. It took them three weeks to recover fully.  The G-series naming system was created by the United States when it uncovered the German activities, labeling (Figure \(\PageIndex{5}\). 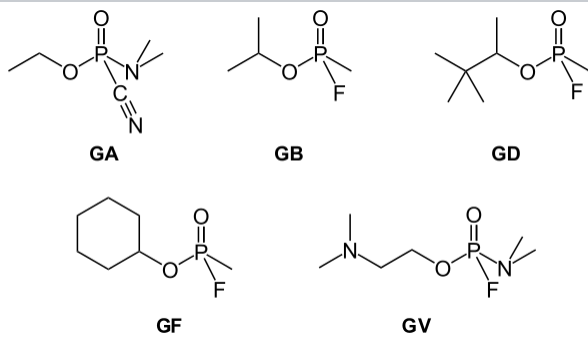 Figure \(\PageIndex{5}\) The G-series of nerve agents. Tabun as GA (German Agent A), sarin as GB and soman as GD. Ethyl sarin was tagged GE and cyclosarin as GF. Source: Wikipedia.

In 1935 the Nazi government had passed a decree that required all inventions of possible military significance to be reported to the Ministry of War, so in May 1937 Schrader sent a sample of tabun to the chemical warfare (CW) section of the Army Weapons Office in Berlin-Spandau. Schrader was summoned to the Wehrmacht chemical lab in Berlin to give a demonstration, after which Schrader's patent application and all related research was classified as secret. Colonel Rüdiger, head of the CW section, ordered the construction of new laboratories for the further investigation of tabun and other organophosphate compounds and Schrader soon moved to a new laboratory at Wuppertal-Elberfeld in the Ruhr valley to continue his research in secret throughout World War II. The compound was initially codenamed Le-100 and later Trilon-83.

Sarin was discovered by Schrader and his team in 1938 and named in honor of its discoverers: Schrader, Ambros, Gerhard Ritter, and von der Linde.[26] It was codenamed T-144 or Trilon-46. It was found to be more than ten times as potent as tabun.

Soman was discovered by Richard Kuhn in 1944 as he worked with the existing compounds; the name is derived from either the Greek 'to sleep' or the Latin 'to bludgeon'. It was codenamed T-300.

Cyclosarin was also discovered during WWII but the details were lost and it was rediscovered in 1949.

Some insecticides, including carbamates and organophosphates such as dichlorvos, malathion and parathion, are nerve agents (Figure \(\PageIndex{6}\)). The metabolism of insects is sufficiently different from mammals that these compounds have little effect on humans and other mammals at proper doses, but there is considerable concern

about the long-term exposure to these chemicals by farm workers and animals alike. At high enough doses, acute toxicity and death can occur through the same mechanism as other nerve agents. Some insecticides such as demeton, dimefox and paraoxon are sufficiently toxic to humans that they have been withdrawn from agricultural use, and were at one stage investigated for potential military applications. Paraoxon was allegedly used as an assassination weapon by the apartheid South African government as part of Project Coast. Organophosphate pesticide poisoning is a major cause of disability in many developing countries and is often the preferred method of suicide.[24]

Standard treatment for nerve agent poisoning is a combination of an anticholinergic to manage the symptoms, and an oxime as an antidote.[10] Anticholinergics treat the symptoms by reducing the effects of acetylcholine, while oximes displaces phosphate molecules from the active site of the cholinesterase enzymes, allowing the breakdown of acetylcholine. Military personnel are issued the combination in an autoinjector (e.g. ATNAA), for ease of use in stressful conditions.[11]

Atropine (Figure \(\PageIndex{7}\)  is the standard anticholinergic drug used to manage the symptoms of nerve agent poisoning.[12] It acts as an antagonist to muscarinic acetylcholine receptors, blocking the effects of excess acetylcholine.[11] Some synthetic anticholinergics, such as biperiden,[13] may counteract the central symptoms of nerve agent poisoning more effectively than atropine, since they pass the blood–brain barrier better than atropine.[14] While these drugs will save the life of a person affected by nerve agents, that person may be incapacitated briefly or for an extended period, depending on the extent of exposure. The endpoint of atropine administration is the clearing of bronchial secretions.[12]

Anticonvulsants, such as diazepam, may be administered to manage seizures, improving long term prognosis and reducing risk of brain damage.[12] This is not usually self-administered as its use is for actively seizing patients.[16] Figure \(\PageIndex{7}\) a. Atrophine molecule and b. an ampoule containing atropine injection 1mL/0.5mg.