The proceeding discussion was based on the behaviors of ideal solutions of volatile compounds, and for which both compounds follow Raoult’s Law. Henry’s Law can be used to describe these deviations.

For which the Henry’s Law constant (\(k_H\)) is determined for the specific compound. Henry’s Law is often used to describe the solubilities of gases in liquids. The relationship to Raoult’s Law is summarized in Figure \(\PageIndex{1}\).

Henry’s Law is depicted by the upper straight line and Raoult’s Law by the lower.

In one L of solution, there is 1000 g of water (assuming the mass of CO2 dissolved is negligible.)

An azeotrope is defined as the common composition of vapor and liquid when they have the same composition.

Azeotropes can be either maximum boiling or minimum boiling, as show in Figure \(\PageIndex{2; left}\). Regardless, distillation cannot purify past the azeotrope point, since the vapor and quid phases have the same composition. If a system forms a minimum boiling azeotrope and also has a range of compositions and temperatures at which two liquid phases exist, the phase diagram might look like Figure \(\PageIndex{2; right}\):

Another possibility that is common is for two substances to form a two-phase liquid, form a minimum boiling azeotrope, but for the azeotrope to boil at a temperature below which the two liquid phases become miscible. In this case, the phase diagram will look like Figure \(\PageIndex{3}\).

In the diagram, make up of a system in each region is summarized below the diagram. The point e indicates the azeotrope composition and boiling temperature. 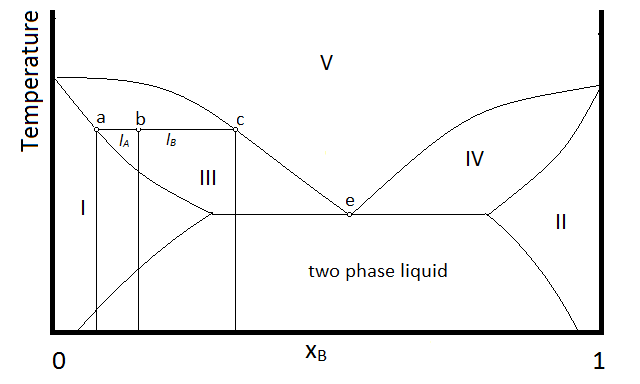 What happens is Raoult does not hold over the whole range? Recall that in a gas:

after dropping \(P^o=1\; bar\) out of the notation. Note that numerically this does not matter, since \(P_j\) is now assumed to be dimensionless.

If we substitute into the Gibbs-Duhem expression we get:

(This is an alternative way of writing Gibbs-Duhem).

We can integrate Equation \(\ref{EqA12}\) to form a logarithmic impression, but it will have an integration constant:

This constant of integration can be folded into the logarithm as a multiplicative constant, \(K\)

where \(K\) is some constant, but not necessarily \(P^*\). What this shows is that when one component follows Raoult the other must follow Henry and vice versa. (Note that the ideal case is a subset of this case, in that the value of \(K\) then becomes \(P^*\) and the linearity must hold over the whole range.)

Of course a big drawback of the Henry law is that it only describes what happens at the two extremes of the phase diagram and not in the middle. In cases of moderate non-ideality, it is possible to describe the whole range (at least in good approximation) using a Margules function:

Notice that the Margules function involves the mole fraction of the opposite component. It is an exponential with a series expansion. with the constant and linear term missing. As you can see the function has a number of parameters \(α\), \(β\), \(δ\) etc. that need to be determined by experiment. In general, the more the system diverges from ideality, the more parameters you need. Using Gibbs-Duhem is is possible to translate the expression for \(P_1\) into the corresponding one for \(P_2\).