Group Theory is the mathematical application of symmetry to an object to obtain knowledge of its physical properties. What group theory brings to the table, is how the symmetry of a molecule is related to its physical properties and provides a quick simple method to determine the relevant physical information of the molecule. The symmetry of a molecule provides you with the information of what energy levels the orbitals will be, what the orbitals symmetries are, what transitions can occur between energy levels, even bond order to name a few can be found, all without rigorous calculations. The fact that so many important physical aspects can be derived from symmetry is a very profound statement and this is what makes group theory so powerful.

To a fully understand the math behind group theory one needs to take a look at the theory portion of the Group Theory topic or refer to one of the reference text listed at the bottom of the page. Never the less as Chemist the object in question we are examining is usually a molecule. Though we live in the 21st century and much is known about the physical aspects that give rise to molecular and atomic properties. The number of high level calculations that need to be performed can be both time consuming and tedious. To most experimentalist this task is takes away time and is usually not the integral part of their work. When one thinks of group theory applications one doesn't necessarily associated it with everyday life or a simple toy like a Rubik's cube. A Rubik's cube is an a cube that has a \(3 \times 3\) array of different colored tiles on each of its six surfaces, for a total of 54 tiles. Since the cube exist in 3D space, the three axis are \(x\), \(y\), \(z\). Since the rubik's cube only allows rotation which are called operations, there are three such operations around each of the \(x\), \(y\), \(z\) axis. Figure: Reubik's cube. Use with permission from Wikipedia

The character table contains a wealth of information, for a more detailed discussion of the character table can be found in Group Theory Theoretical portion of the chemWiki. All operations in the character table are contained in the first row of the character table, in this case \(E\), \(C_3\), & \(\sigma_v\), these are all of the operations that can be preformed on the molecule that return the original structure. The first column contains the three irreducible representations from now on denoted as \(\Gamma_{ir}\), here they are \(A_1\), \(A_2\) & \(E\). The value of the \(\Gamma_{ir}\) denotes what the operation does. A value of 1 represents no change, -1 opposite change and 0 is a combination of 1 & -1 (0’s are found in degenerate molecules. The final two columns Rotation and Translation represented by \(R_x\),\(R_y\), \(R_z\) & \(x\), \(y\), \(z\) respectively. Where R's refer to rotation about an axis and the \(x\), \(y\), \(z\) refers to a translation about an axis, the \(\Gamma_{ir}\) the each \(R_x\), \(R_y\), \(R_z\) & \(x\), \(y\), \(z\) term is the irreducible symmetry of a rotation or translation operation. Like wise the final column the orbital symmetries relates the orbital wavefunction to a irreducible representation.

This is a quick rule to follow for calculating Direct Products of irreproducible representations, such a calculation will be necessary for working through transition moment integrals. Following the basic rules given by the table given below. One can easily work through symmetry calculations very quickly. 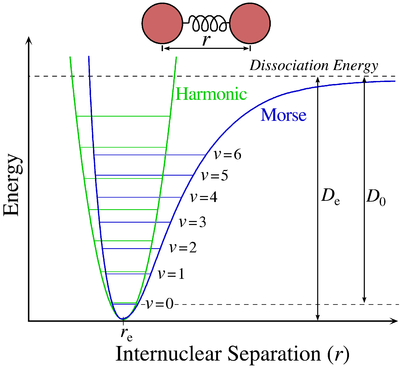 Vibrational energies arise from the absorption of polarizing radiation. Each vibrational state is assigned a \(\Gamma_{ir}\). A vibration occurs when an electron remains within the electronic state but changes from one eigenstate to another (The vibrations for the moment are only IR active vibrations, there are also Raman vibrations which will be discussed later in electronic spectroscopy), in the case of the Morse diagram above the eigenstates are denoted as \(\nu\). As you can see from the diagram the eigenstate is a function of energy versus interatomic distance.

To predicting whether or not a vibrational transition, or for that matter a transition of any kind, will occur we use the transition moment integral.

The transition moment integral is written here in standard integral format, but this is equivalent to Bra & Ket format which is standard in most chemistry quantum mechanical text (The \(\langle \Psi_i |\) is the Bra portion, \(| \Psi_f \rangle\) is the Ket portion). The transition moment operator \(\mu\) is the operator the couples the initial state \(\Psi_i\) to the final state \(\Psi_f\) , which is derived from the time independent Schrödinger equation. However using group theory we can ignore the detailed mathematical methods. We can use the \(\Gamma_{ir}\) of the vibrational energy levels and the symmetry of the transition moment operator to find out if the transition is allowed by selection rules. The selection rules for vibrations or any transition is that is allowed, for it to by allowed by group theory the answer must contain the totally symmetric \(\Gamma_{ir}\), which is always the first \(\Gamma_{ir}\) in the character table for the molecule in question.

Let’s work through an example: Ammonia (\(NH_3\)) with a \(C_{3v}\) symmetry. Consequently, all of the properties contained in the \(C_{3v}\) character table above are pertinent to the ammonia molecule. The number of transitions is dictated by 3N-6 for non-linear molecules and 3N-5 for linear molecules, where N is the number of atoms. The 6 & the 5 derive from three translations in the x,y,z plan and three rotations also in the x,y,z plan. Where a linear molecule only has two rotations in the x & y plans since the z axis has infinite rotation. This leads to only 5 degrees of freedom in the rotation and translation operations. In the case of Ammonia there will be 3(4)-6=6 vibrational transitions. This can be confirmed by working through the vibrations of the molecule. This work is shown in the table below. 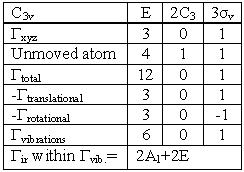 For the purposes of Group Theory Raman and Fluorescence are indistinguishable. They can be treated as the same process and in reality they are quantum mechanically but differ only in how Raman photons scatter versus those of fluorescence.

Phosphorescence is the same as fluorescence except upon excitation to a singlet state there is an interconversion step that converts the initial singlet state to a triplet state upon relaxation. This process is longer than fluorescence and can last microseconds to several minutes. However despite the singlet to triplet conversion the transition moment integral still holds true and the symmetry of ground state and final state still need to contain the totally symmetric representation. The ?ir of the molecular orbitals are created by simply preforming the operations of that molecule's character table on that orbital. In the case of trans-2-butene the point group is C2h, the operations are: E, C2, i & ?h. Each operation will result in a change in phase (since were dealing with p-orbitals) or it will result in no change. The first molecular orbital results in the totally symmetric representation, working through all four operations E, C2, i, ?h will only result in 1's meaning there is no change, giving the Ag symmetry state. These molecular orbitals also represent different electronic states and can be arranged energetically. Putting the orbital that has the lowest energy, the orbital with the fewest nodes at the bottom of the energy diagram and like wise working up form lowest energy to highest energy. The highest energy orbital will have the most nodes. Once you've set up your MO diagram and place the four pi electrons in the orbitals you see that the first two orbitals listed (lowest energy) are HOMO orbitals and the bottom two (highest energy) and LUMO orbitals. With this information if you have a transition from the totally symmetric HOMO orbital to the totally symmetric LUMO orbital the transition moment operator would need to have Ag symmetry (using the C2h) to give a result containing the totally symmetric representation.

These four molecular orbitals represent four different electronic states. So transitions from one MO into another would be something that is measured typically with UV-Vis spectrometer.