Reaction rates depend on the energy required (the activation barrier) and the energy available. They also may involve collisions between molecules.

These principles are summarized as follows:

Phase also has a pronounced effect on the mobility of molecules. Molecules in the gas phase are free to move around, and they do so quickly. On the other hand, they are pretty well spread out. Nevertheless, collisions in the gas phase happen quite easily, which make gas-phase reactions happen more readily. At the opposite extreme, molecules in the solid phase are not very mobile at all (reactions may involve atoms or ions, rather than molecules, but the same arguments apply). Not many collisions happen. As a result, reactions often happen extremely slowly in the solid state. Reactions are mostly limited to the grain boundaries: the surfaces of the grains, where they are in contact with each other. Nothing happens in the middle of a lump of solid, which remains unreacted. If a solid is heated, the molecules can move around a little more. They may even leave their crystal lattice (if the solid is crystalline) and diffuse very slowly through the solid. Many solid state reactions are run at elevated temperature. It is also very common to run reactions in solution. In solution, a compound that is meant to undergo reaction is dissolved in a solvent. The solvent must be a liquid at the temperature at which the reaction will be run, so that molecules will be very mobile, but will still be close together, so collisions are favored.

There are many advantages to running reactions in solution. The reactant molecules are very mobile and pretty close together, so that collisions are facilitated. If the reaction is exothermic and gives of a lot of heat, the excess heat can be absorbed by the solvent molecules and carried away. That can be important in controlling reactions and avoiding decomposition. Also, we will see that the rate of collisions can be controlled by adding more solvent or less, in order to slow the reaction down or speed it up. In this way, the reaction rate can be controlled to some extent.

There are many liquids that are commonly used as solvents. Dichloromethane, toluene, dimethylformamide, tetrahydrofuran and acetonitrile are some common "organic" solvents, so called because they are based on carbon, which forms the basis of molecules in organisms. These different solvents offer a range of polarities, offering an ability to dissolve a variety of different reactants.

Water may be the most common solvent on the planet, and it is non-toxic, so it is very appealing for use in large-scale, industrial reactions. However, it is not very good at dissolving non-polar reactants. The disadvantage of using a solvent is that the solvent must be removed at the end of the reaction so that the desired product can be isolated and used. That means the solvent may eventually be thrown away as waste. That practice is less efficient and less environmentally friendly, although the solvent could possibly be recycled.

One method of dissolving reactants that is potentially greener is the use of supercritical fluids. In this approach, gases such as carbon dioxide are pressurized until they turn into liquids. In this form, carbon dioxide is a pretty good solvent, and reactions can be run when reactants are dissolved in it. At the end of the reaction, a valve is opened, releasing the pressure, and the carbon dioxide turns back into a gas. It can be stored and re-pressurized for another reaction.

Diffusion in the solid state is greatly enhanced by defects in the crystal lattice. Show why with the following drawing. Three common solvents are shown below. Compare and contrast these three solvents in terms of how they interact with other molecules.

Indicate how well you think each of the three solvents in the above question (THF, water, DMF) could dissolve each of the following compounds. Justify your answers in terms of interactions between molecules. 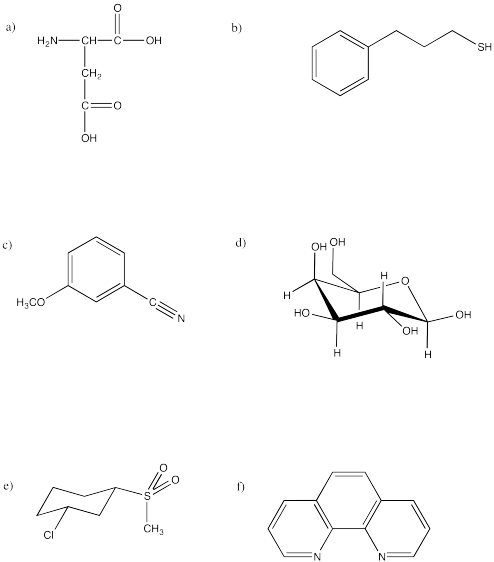