All detecting methods are based on the interaction of the radiation with matter. If a radiation does not interact with any matter, we have no method of the detecting it. Since ionization is an important process for radioactivity, most detectors exploit the signals generated due to ions and electrons.

Detectors Based on the Ionization of Gas Ion pairs in a gas produced by ionizing radiation do not recombine until the energies of electrons have dissipated. In a gas, ions and electrons move freely.

The key components of an ionization chamber are shown here. It consists of a detector chamber, a voltage supplier (battery), an ampere meter, and a load resister.

Ionizing radiation enters the detector chamber and ionizes the mixture of gas in it. The electrons drift towards the positive electrode and ions move towards the negative electrode. Thus, ampere meter detects a current.

The light electrons drift 100,000 times faster than the heavy ions. The motion of electrons is mostly responsible for the current.

Rutherford placed a thorium oxide (ThO2) sample directly in the detector chamber. He noticed that the radioactivity increased with time. After removing the sample carefully without changing the air in the chamber, he found the air remained radioactive. The radioactive air decayed with a specific half life. Other radioactive samples did not give the same observation. His experiment suggested the existence of a radioactive gaseous element. The experiment was later interpreted as due to the decay of Th ( , a) Ra ( , a) Rn. Several isotopes of thorium produce radon isotopes in their decays. Such a simple ionization chamber led to the discovery of a decay series.

Discovery is an important goal of scientific research, and methodologies for doing research are constantly under development.

At some hundreds volts, the improvement in sensitivity is more than collecting all the When voltages applied to electrodes of ionization chambers increase, the sensitivities increase. Electrons and ions on the electrode. The currents corresponding to multiples of ions and electrons produced by radioactivity. To distinct them from simple ionization chambers, these detectors are called proportional counters.

In proportional counters, the high voltage applied to the electrodes created a strong electric field, which accelerate electrons. The electrons, after having acquired the energy, ionize other molecules. Production of secondary ion pairs initiates an avalanche of ionization by every primary electron generated by radiation. Such a process is called gas multiplication.

The gas multiplication makes the detection much more sensitive. Yet, the current is still proportional to the number of primary ion pairs.

When voltages applied to proportional counters get still higher, sparks jump (arcs) between the two electrodes along the tracks of ionizing particles. These detectors are called spark chambers, which give internal amplification factors up to 1,000,000 times while still giving an initial signal proportional to the number of primary ion pairs. Geiger-Muller counters are the most widely used radioactivity detectors. They are often called Geiger counters, which are essentially a spark counter operating at still higher voltage.

The voltages depend on the mixture of gases in the detector chamber. At a high voltage, a single primary ion pair causes a spark to jump between the electrodes.

Every spark gives a pulse registered either accross the two electrodes of the chamber or accross the resister. Electronic means count the number of pulses. The counter can also be made to give an audible signal for each pulse. 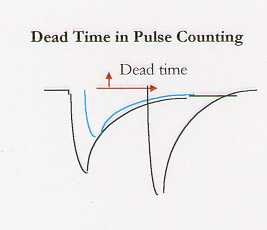 The intensity of the pulse is related to the number of primary ion pairs, but we are often more interested in the number of ionizing particles entering the chamber.

Something about dead time has yet to be added.

If the source radiation is really strong, the Geiger counter may give a zero reading.

In a solid semiconductor, atoms are fixed in their locations. Electrons are tightly bound to atoms or chemical bonds.

At liquid nitrogen temperature, the number of carriers is dramatically reduced to almost zero. At low temperature, it is easier to distinguish signals due to electrons freed by radiation from those due to thermal carriers.

A P-N junction of semiconductors is placed under reverse bias, thus no current flows. Passage of ionizing radiation through the depleted region excites electrons into the conduction band, causing a temporary conduction which gives rise to a pulse corresponding to the number of excited electrons or energy entering the solid state.

The electronics used to analyze the pulses does more than counting. It separates the pulses into hundreds of groups called channels according to the pulse heights. Therefore, the equipment is often called multi-channel analyzer. When intensities of these channels are displayed according to their energies, the measurement gives a spectrum. A gamma-ray spectrum of 56Co measured using a solid state detector is shown here. The continuous background is due to Compton scattering. Single and double escape peaks (marked SEP and DEP) are also shown. The output pulses from a scintillation counter are proportional to the energy of the radiation. Electronic devices have been built not only to detect the pulses, but also to measure the pulse heights. The measurements enable us to plot the intensity (number of pulses) versus energy (pulse height), yielding a spectrum of the source.

Photons striking a sodium iodide (NaI) crystal, which contains 0.5 mole percent of thallium iodide (TlI) as an activator, cause the emission of a short flash of light in the wavelength range of 3300-5000 A (in the ultraviolet region). The light flashes are detected by a photomultiply tube, which gives a pulse corresponding to the light intensity. These pulses are measured by a multi-channel counter.

Studies of particle tracks have led to the discovery a zoo of particles. Cloud and bubble chambers have contributed greatly to these discoveries. These chambers show tracks of ionizing particles.

The ion pairs on the tracks of ionizing radiation form seeds of gas bubbles and droplets. Formations of droplets and bubbles provide visual appearance of their tracks. Therefore, cloud and bubble chambers are called path-, 3-dimensional-, or track-detectors.

C.T.R. Wilson (1869-1959) perfected the cloud chamber, and the detector made the careers for many individuals. Rutherford once remarked that "the cloud chamber was the most original and wonderful instrument in scientific history."

Photographic films recorded the images of X-rays and radioactive decays leading to discoveries that changed the world of science and technology.

Canbera Canberra is the world's leading provider of analytical instruments and systems used to detect, identify, quantify and monitor radioactive materials and serves a broad cross-section of nuclear enterprises.