The Structure of Carboxylic Acid Derivatives

Carboxylic acid and its derivatives are functional groups with closely related chemistry.

The intermolecular forces of the respective acyl group combine with the size and structure of the R-group to determine the physical properties of the the carboxylic acid derivatives as shown in the summary below. Structure and Properties of Nitriles 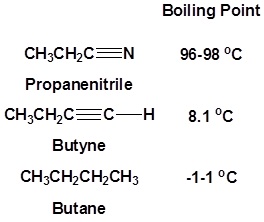 1. Design an extraction separation strategy to separate acetaminophen from cocaine using ether, 1 M HCl, and 3 M NaHCO3. The structures for acetaminophen and cocaine are shown below.