When benzene (C6H6) was first discovered its low hydrogen to carbon ratio (1:1) led chemists to believe it contained double or triple bonds. Since double and triple bonds rapidly add bromine (Br2), this reaction was applied to benzene. Surprisingly, benzene was entirely unreactive toward bromine. In addition, if benzene is forced to react with bromine through the addition of a catalyst, it undergoes substitution reactions rather than the addition reactions that are typical of ​alkenes. These experiments suggested that the six-carbon benzene core is unusually stable to chemical modification.

The conceptual contradiction presented by a high degree of unsaturation (low H:C ratio) and high chemical stability for benzene and related compounds remained an unsolved puzzle for many years. Eventually, the presently accepted structure of benzene as a hexagonal, planar ring of carbons with alternating single and double bonds was adopted, and the exceptional chemical stability of this system was attributed to special resonance stabilization of the conjugated cyclic triene. No single structure provides an accurate representation of benzene as it is a combination of two structurally and energetically equivalent resonance forms representing the continuous cyclic conjugation of the double bonds. In the past, the benzene resonance hybrid was represented by a hexagon with a circle in the center to represent the benzene's pi-electron delocalization. This method has largely been abandoned because it does not show the pi electrons contained in benzene. Currently, the structure of benzene is usually represented by drawing one resonance form with the understanding that it does not completely represent the true structure of benzene.

The six-membered ring in benzene is a perfect hexagon with all carbon-carbon bonds having an identical length of 139 pm1. The 139 pm bond length is roughly in between those of a C=C double bond (134 pm) and a C-C single (154 pm) which agrees with the benzene ring being a resonance hybrid made up of 1.5 C-C bonds. Each carbon in the benzene ring is sp2 hybridized which makes all the C-C-C and H-C-C bond angles in benzene 120o and makes the overall molecule planar.

In previous polyalkene, examples the electron delocalization described by resonance enhanced the stability of the molecule. However, benzene's stability goes beyond this. Evidence for the enhanced thermodynamic stability of benzene was obtained from measurements of the heat released when double bonds in a six-carbon ring are hydrogenated (hydrogen is added catalytically) to give cyclohexane as a common product. In the following diagram cyclohexane represents a low-energy reference point. Addition of hydrogen to cyclohexene produces cyclohexane and releases heat amounting to 28.6 kcal per mole. If we take this value to represent the energy cost of introducing one double bond into a six-carbon ring, we would expect a cyclohexadiene to release 57.2 kcal per mole on complete hydrogenation, and 1,3,5-cyclohexatriene to release 85.8 kcal per mole. These heats of hydrogenation would reflect the relative thermodynamic stability of the compounds. In practice, 1,3-cyclohexadiene is slightly more stable than expected, by about 2 kcal, presumably due to conjugation of the double bonds. Benzene, however, is an extraordinary 36 kcal/mole more stable than expected. This sort of stability enhancement is called aromaticity and molecules with aromaticity are called aromatic compounds. Benzene is the most common aromatic compound but there are many others. Aromatic stabilization explains benzene's lack of reactivity compared to typical alkenes.

Also, each of benzene's six carbon atoms are sp2 hybridized and have an unhybrized p orbital perpendicular to plane of the ring. Because each of the six carbon atoms and their corresponding p orbitals are equivalent, it is impossible for them to only overlap with one adjacent p orbital to create three defined double bonds. Instead each p orbtial overlaps equally with both adjacent orbitals creating a cyclic overlap involving all six p orbitals. This allows the p orbitals to be delocalized in molecular orbitals that extend all the way around the ring allowing for more overlap than would be obtained from the linear 1,3,5-hexatriene equivalent. For this to happen, of course, the ring must be planar – otherwise the p orbitals couldn’t overlap properly and benzene is known to be a flat molecule. An electrostatic potential map of benzene, shown below, shows that the pi electrons are evenly distributed around the ring and that every carbon equivalent. An electrostatic potential map of benzene

1) The molecule, pyridine, is planar with bond angles of 120o. Pyridine has many other characteristics similar to benzene. Draw a diagram showing the p orbitals in pyridine and use it to explain its similarity to benzene. 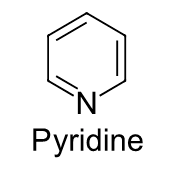 The nitrogen and each carbon in the pyridine ring is sp2 hybridized. In the bonding picture for pyridine, the nitrogen is sp2-hybridized, with two of the three sp2 orbitals forming sigma overlaps with the sp2 orbitals of neighboring carbon atoms, and the third nitrogen sp2 orbital containing the lone pair electrons. The unhybridized p orbital contains a single electron, which is part of the 6 pi-electron system delocalized around the ring. Pyridine is most likely aromatic which gives it its planar shape and 120o bond angles.