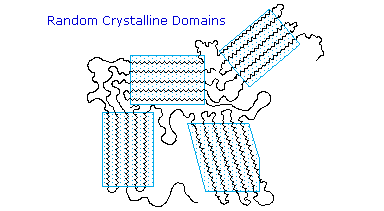 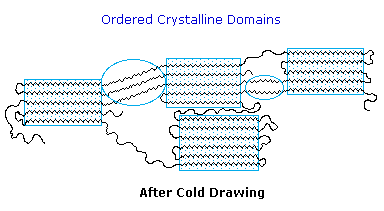 Polyamides are polymers where the repeating units are held together by amide links. An amide group has the formula - CONH2. An amide link has this structure:

In an amide itself, of course, the bond on the right is attached to a hydrogen atom.

Nylon-6,6 is made from two monomers each of which contain 6 carbon atoms - hence its name. One of the monomers is a 6 carbon acid with a -COOH group at each end - hexanedioic acid. The other monomer is a 6 carbon chain with an amino group, -NH2, at each end. This is 1,6-diaminohexane (also known as hexane-1,6-diamine).

When these two compounds polymerise, the amine and acid groups combine, each time with the loss of a molecule of water. This is known as condensation polymerization. Condensation polymerization is the formation of a polymer involving the loss of a small molecule. In this case, the molecule is water, but in other cases different small molecules might be lost.

The diagram shows the loss of water between two of the monomers:

This keeps on happening, and so you get a chain which looks like this:

Iit is possible to get a polyamide from a single monomer. Nylon-6 is made from a monomer called caprolactam.

Notice that this already contains an amide link. When this molecule polymerizes, the ring opens, and the molecules join up in a continuous chain.

Kevlar is similar in structure to nylon-6,6 except that instead of the amide links joining chains of carbon atoms together, they join benzene rings. The two monomers are benzene-1,4-dicarboxylic acid and 1,4-diaminobenzene.

If you line these up and remove water between the -COOH and -NH2 groups in the same way as we did with nylon-6,6, you get the structure of Kevlar:

What is a polyester?

A polyester is a polymer (a chain of repeating units) where the individual units are held together by ester linkages.

The diagram shows a very small bit of the polymer chain and looks pretty complicated. But it is not very difficult to work out - and that's the best thing to do: work it out, not try to remember it. You will see how to do that in a moment.

Making polyesters as an example of condensation polymerisation

In condensation polymerisation, when the monomers join together a small molecule gets lost. That's different from addition polymerisation which produces polymers like poly(ethene) - in that case, nothing is lost when the monomers join together. A polyester is made by a reaction involving an acid with two -COOH groups, and an alcohol with two -OH groups. In the common polyester drawn below.

Now imagine lining these up alternately and making esters with each acid group and each alcohol group, losing a molecule of water every time an ester linkage is made.

That would produce the chain shown above (although this time written without separating out the carbon-oxygen double bond - write it whichever way you like).