Starch is a mixture of two polymers: amylose and amylopectin. Natural starches consist of about 10%–30% amylase and 70%–90% amylopectin. Amylose is a linear polysaccharide composed entirely of D-glucose units joined by the α-1,4-glycosidic linkages we saw in maltose (part (a) of Figure 5.1.1). Experimental evidence indicates that amylose is not a straight chain of glucose units but instead is coiled like a spring, with six glucose monomers per turn (part (b) of Figure 5.1.1). When coiled in this fashion, amylose has just enough room in its core to accommodate an iodine molecule. The characteristic blue-violet color that appears when starch is treated with iodine is due to the formation of the amylose-iodine complex. This color test is sensitive enough to detect even minute amounts of starch in solution. Figure 5.1.1: Amylose. (a) Amylose is a linear chain of α-D-glucose units joined together by α-1,4-glycosidic bonds. (b) Because of hydrogen bonding, amylose acquires a spiral structure that contains six glucose units per turn.

Amylopectin is a branched-chain polysaccharide composed of glucose units linked primarily by α-1,4-glycosidic bonds but with occasional α-1,6-glycosidic bonds, which are responsible for the branching. A molecule of amylopectin may contain many thousands of glucose units with branch points occurring about every 25–30 units (Figure 5.1.2). The helical structure of amylopectin is disrupted by the branching of the chain, so instead of the deep blue-violet color amylose gives with iodine, amylopectin produces a less intense reddish brown. Like amylose, cellulose is a linear polymer of glucose. It differs, however, in that the glucose units are joined by β-1,4-glycosidic linkages, producing a more extended structure than amylose (part (a) of Figure 5.1.3). This extreme linearity allows a great deal of hydrogen bonding between OH groups on adjacent chains, causing them to pack closely into fibers (part (b) of Figure 5.1.3). As a result, cellulose exhibits little interaction with water or any other solvent. Cotton and wood, for example, are completely insoluble in water and have considerable mechanical strength. Because cellulose does not have a helical structure, it does not bind to iodine to form a colored product. 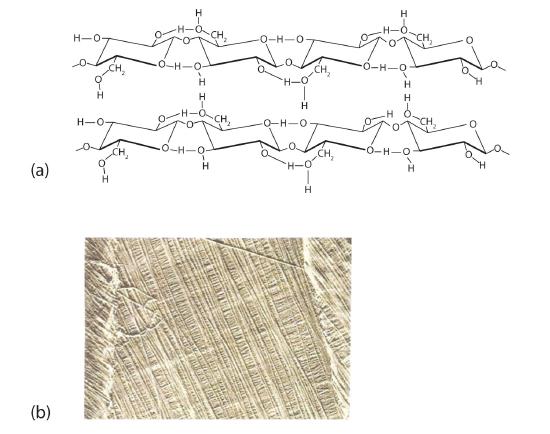 Figure 5.1.3: Cellulose. (a) There is extensive hydrogen bonding in the structure of cellulose. (b) In this electron micrograph of the cell wall of an alga, the wall consists of successive layers of cellulose fibers in parallel arrangement.