The basis for nuclear magnetic resonance is the observation that many atomic nuclei spin about an axis and generate their own magnetic field, or magnetic moment. For reasons that are outside the scope of this text, only those nuclei with an odd number of protons and/or neutrons have a magnetic moment. Fortunately for chemists, several common nuclei, including hydrogen (1H), the 13C isotope of carbon, the 19F isotope of fluorine, and the 31P isotope of phosphorus, all have magnetic moments and therefore can be observed by NMR – they are, in other words, NMR-active. Other nuclei - such as the common 12C and 16O isotopes of carbon and oxygen - do not have magnetic moments, and are essentially invisible in NMR. Other nuclei such as deuterium (2H) and nitrogen (14N) have magnetic moments and are NMR-active, but the nature of their magnetic moments is such that these nuclei are more difficult to analyze by NMR. In practice it is 1H, 13C, 19F, and 31P that are most often observed by NMR spectroscopy. In this chapter, we will develop our understanding of the principles behind NMR spectroscopy by focusing our attention first on the detection of protons in 1H-NMR experiments (in discussion about NMR, the terms 'hydrogen' and 'proton' are used interchangeably). Much of what we learn, however, will also apply to the detection and analysis of other NMR-active nuclei, and later in the chapter we will shift our attention to NMR experiments involving 13C and 31P atoms.

5.1B: Nuclear precession, spin states, and the resonance condition

When a sample of an organic compound is sitting in a flask on a laboratory benchtop, the magnetic moments of its hydrogen atoms are randomly oriented. When the same sample is placed within the field of a very strong magnet in an NMR instrument (this field is referred to by NMR spectroscopists as the applied field, abbreviated B0 ) each hydrogen will assume one of two possible spin states. In what is referred to as the +½ spin state, the hydrogen's magnetic moment is aligned with the direction of B0, while in the -½ spin state it is aligned opposed to the direction of B0. 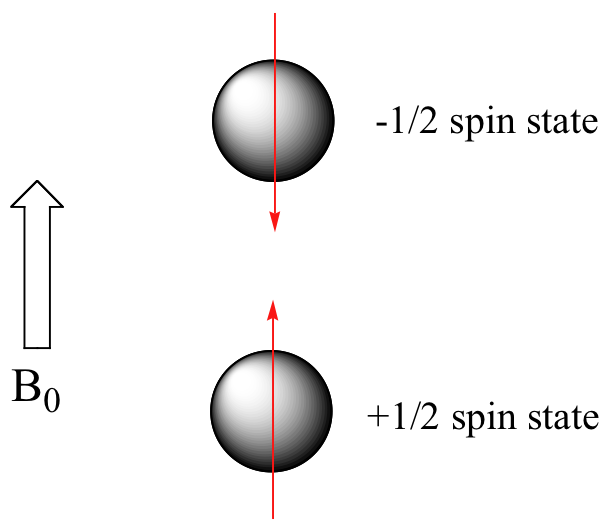