On an earlier page, we saw that polyesters and polyamides are typically obtained via condensation polymerization. Ring-opening polymerization (ROP) offers a second approach to these kinds of materials. Using this method, cyclic esters (lactones) or amides (lactams) are opened up to make extended chain structures. The reaction is typically driven by the release of ring strain. For example, caprolactone is ring-opened to produce polycaprolactone.

Caprolactone and other ROP monomers are different from the monomers used in condensation polymerization in a couple of ways. First of all, ROP monomers contain only one functional group, not two. Furthermore, they don't need a complementary monomer. These monomers just react with each other. Also, when they react, they don't form a new functional group, as was sometimes the case in condensation reactions. The monomers were esters and the products are esters, too. This swapping of esters leads to the more specific term "ring-opening trans-esterification polymerization" (ROTEP) when lactone monomers are used.

Let's take a look at how these monomers can be enchained together without the need for complementary monomers. The transformation is instead carried out using a chain reaction. An initiator is needed. In this case, an alkoxide nucleophile can be added to open the first monomer, but when that happens, the substitution reaction at the carboxyloid carbon displaces an alkoxide leaving group. The new alkoxide can then add to the next monomer, propagating the chain reaction.

In this drawing, you can explicitly see the new ester linkage formed between two monomers, replacing the ester linkage in the monomer.

Caprolactone and other cyclic esters can be polymerized via anionic methods, but that isn't the only way. It's very common for these polymerizations to be performed via Lewis acid catalysis instead.

A range of Lewis acids can be used for this purpose, and common examples include iron, zinc, tin and aluminum compounds. This example uses the commercially available tin octoate as a catalyst.

The role of the Lews acid can be twofold. It can accelerate the reaction via electrophilic activation, in which it binds the carbonyl oxygen of the ester, making it more electrophilic.

In addition, when neutral alcohols bind to Lewis acids such as tin octoate, they are more easily deprotonated, becoming better nucleophiles. Both of these effects probably add up to very rapid ring-opening polymerization under these conditions.

Usually, ring-opened polymers grown either through anionic or Lewis acid conditions have a single growing end, but that doesn't have to be the case. If a difunctional initiator is used instead of a simple alcohol, two monomers would be initiated, allowing growth in two different directions. For example, ring-opening polymerization of ethylene oxide is often accomplished with ethylene glycol as an initiator. The ethylene glycol unit becomes enchained in the middle of the polymer chain, rather than at the end.

This type of structure, with two growing ends, is sometimes called a "telechelic" polymer. It can be very useful in the synthesis of triblock copolymers, because a different kind of monomer can be added to both ends of an existing polymer, leading to an ABA structure.

Some catalysts for ring-opening polymerization contain both a Lewis acid and a nucleophile for initiation of chain growth. Identify these two components in the following catalysts. 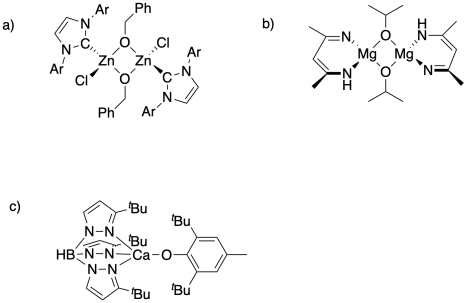 Some organocatalysts promote ring-opening polymerization of cyclic esters through nucleophilic catalysis, acting as an initial nucleophile. Show the mechanism for the following reaction.

Some organocatalysts can activate both the nucleophile and the electrophile, and also use a catalytic approximation strategy. Provide a structure that illustrates these features in the following system.