The Earth's atmosphere is composed of several layers (Figure \(\PageIndex{1}\)). The lowest layer, the troposphere, extends from the Earth's surface up to about 6 miles or 10 kilometers (km) in altitude. Virtually all human activities occur in the troposphere. Mt. Everest, the tallest mountain on the planet, is only about 5.6 miles (9 km) high. The next layer, the stratosphere, continues from 6 miles (10 km) to about 31 miles (50 km). Most commercial airplanes fly in the lower part of the stratosphere.

Most atmospheric ozone is concentrated in a layer in the stratosphere, about 9 to 18 miles (15 to 30 km) above the Earth's surface (see the figure below). Ozone is a molecule that contains three oxygen atoms. At any given time, ozone molecules are constantly formed and destroyed in the stratosphere. The total amount has remained relatively stable during the decades that it has been measured.

The ozone layer in the stratosphere absorbs a portion of the radiation from the sun, preventing it from reaching the planet's surface. Most importantly, it absorbs the portion of UV light called UVB. UVB has been linked to many harmful effects, including skin cancers, cataracts, xand harm to some crops and marine life. 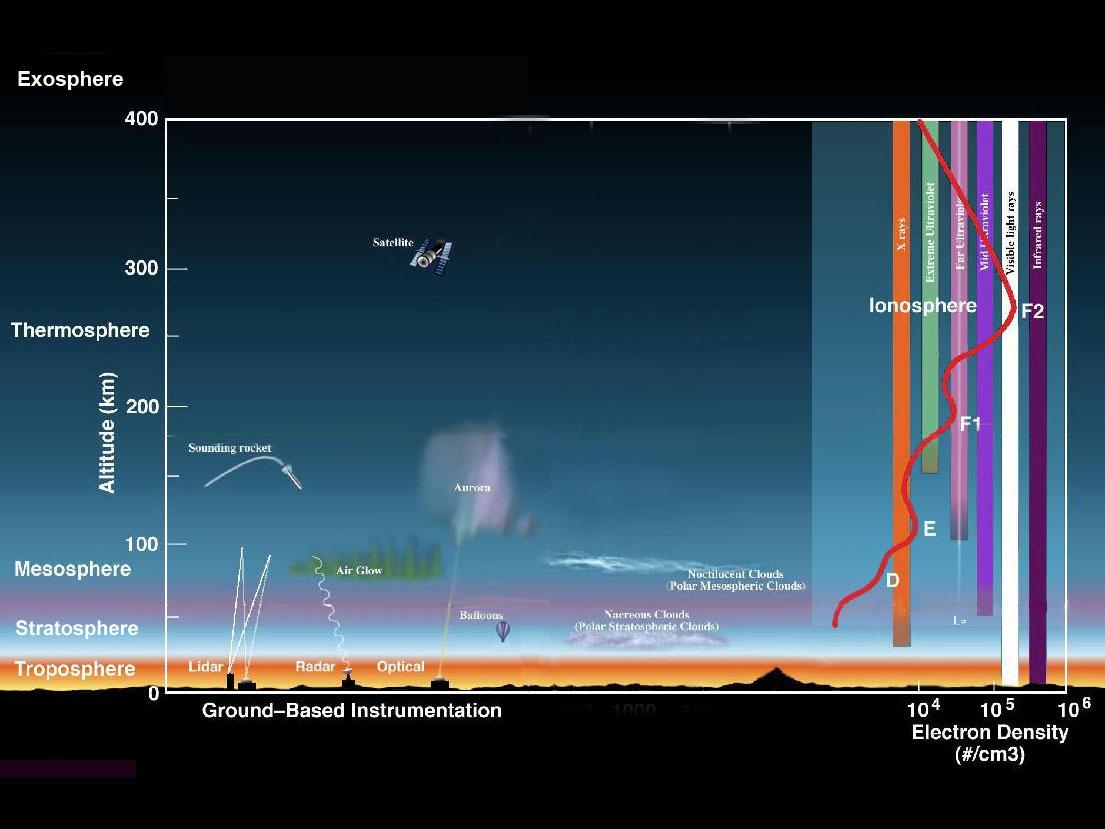 layer. The ionosphere is an abundant layer of electrons and ionized atoms and molecules that stretches from about 48 kilometers (30 miles) above the surface to the edge of space at about 965 km (600 mi), overlapping into the mesosphere and thermosphere. This dynamic region grows and shrinks based on solar conditions and divides further into the sub-regions: D, E and F; based on what wavelength of solar vvradiation is absorbed. The ionosphere is a critical link in the chain of Sun-Earth interactions. This region is what makes radio communications possible. The exosphere is is the upper limit of the atmosphere. It extends from the top of the thermosphere up to 10,000 km (6,200 mi).

Composition of the Atmosphere

Except for water vapor, whose atmospheric abundance varies from practically zero up to 4%, the fractions of the major atmospheric components N2, O2, and Ar are remarkably uniform below about 100 km (Table \(\PageIndex{1}\)). At greater heights, diffusion becomes the principal transport process, and the lighter gases become relatively more abundant. In addition, photochemical processes result in the formation of new species whose high reactivities would preclude their existence in significant concentrations at the higher pressures found at lower elevations.

The atmospheric gases fall into three abundance categories: major, minor, and trace. Nitrogen, the most abundant component, has accumulated over time as a result of its geochemical inertness; a very small fraction of it passes into the other phases as a result of biological activity and natural fixation by lightning. It is believed that denitrifying bacteria in marine sediments may provide the major route for the return of N2 to the atmosphere. Oxygen is almost entirely of biological origin, and cycles through the hydrosphere, the biosphere, and sedimentary rocks. Argon consists mainly of Ar40 which is a decay product of K40 in the mantle and crust.

The most abundant of the minor gases aside from water vapor is carbon dioxide (Table \(\PageIndex{2}\)). Next in abundance are neon and helium. Helium is a decay product of radioactive elements in the earth, but neon and the other inert gases are primordial, and have probably been present in their present relative abundances since the earth’s formation. Two of the minor gases, ozone and carbon monoxide, have abundances that vary with time and location. A variable abundance implies an imbalance between the rates of formation and removal. In the case of carbon monoxide, whose major source is anthropogenic (a small amount is produced by biological action), the variance is probably due largely to localized differences in fuel consumption, particularly in internal combustion engines. The nature of the carbon monoxide sink (removal mechanism) is not entirely clear; it may be partly microbial.