Methoxybenzene or anisole has six carbons, but only four peaks in the spectrum because of symmetry. These peaks are all above 100 ppm, but some peaks are as far downfield as 160 ppm.

Benzaldehyde has peaks between 130 and 140 ppm, as well as one near 190 ppm. Just as in the sp3 region of the spectrum, when a carbon is attached to an electronegative element, it moves further downfield, and since the carbonyl (or C=O) carbon in the aldehyde has two bonds to oxygen, it shows up considerably downfield. The carbonyl carbon in some ketones can show up as far as 210 ppm.

Suggests possible assignments for the following chemical shifts in a 13C NMR spectrum. 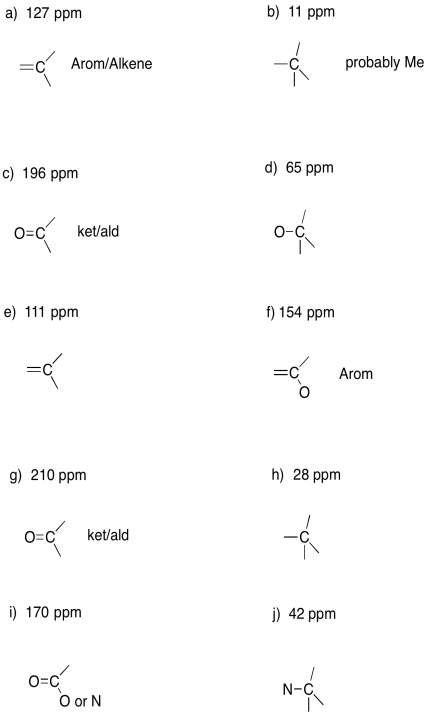 There are subtle effects of electronegativity in saturated hydrocarbons like hexane. Carbons in different positions in those compounds show up at different shifts. In general, a methyl group (CH3) will show up farther upfield than a methylene group (CH2), which will in turn show up further upfield from a methyne group (CH). This trend is related to the difference in electronegativity between a carbon and a hydrogen. Carbon is slightly more electronegative than a hydrogen. As a result, a carbon atom that is bonded to a number of hydrogen atoms has a very slight negative charge. That means it absorbs further upfield. A carbon that is bonded to a number of carbons is more neutral, is not quite so shielded, and shows up a little more downfield.

Unless there are bigger electronegative effects due to heteroatoms such as oxygen,

We can use NMR spectroscopy as a diagnostic tool to determine the structure of a compound. 13C NMR spectroscopy is useful in highlighting whether there are any double bonds in a molecule, whether there are any heteroatoms such as oxygen, and how many different kinds of carbons there are. That last point isn't the same as the number of carbons, but is related to the symmetry of the molecule.