Nucleic acids were first isolated from cell nuclei (hence the name) in 1870. Since then they have been found in other portions of cells as well, especially the ribosomes, which are the sites of protein synthesis. Most nucleic acids are extremely long-chain polymers—some forms of DNA have molecular weights greater than 109. Nucleic acids are made up from three distinct structural units. These are:

1 A five-carbon sugar. Only two sugars are involved. These are ribose (used in RNA) and deoxyribose (used in DNA). Their structures are shown in Fig. \(\PageIndex{1}\) . Note that deoxyribose, as its name implies, has one oxygen less than ribose in the 2 position.

2 A nitrogenous base. There are five of these bases. All are shown in Fig. \(\PageIndex{2}\) . Three of them, adenine, guanine, and cytosine, are common to both DNA and RNA. Thymine occurs only in DNA, and uracil only in RNA.

3 Phosphoric acid. H3PO4 provides the unit that holds the various segments of the nucleic acid chain to each other.

The combination of a sugar and a nitrogenous base is called a nucleoside. A typical example of a nucleoside is adenosine, derived by the condensation of ribose and adenine: 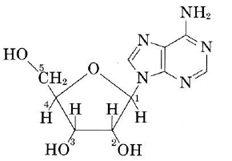 Finally the presence of —OH groups on both the phosphoric acid and sugar portions allows one nucleotide to link with another. This results in the polymeric structure shown in Fig. \(\PageIndex{3}\) . Note that directionality is introduced along the chain because a sugar connected to one phosphate through carbon atom 5 always joins to the next phosphate via carbon atom 3.