In order to meet the requirements of normal valence, it is sometimes necessary to have more than one bond, that is, more than one shared pair of electrons between two atoms. A case in point is formaldehyde, CH2O. In order to provide carbon with four bonds in this molecule, we must consider carbon as forming two bonds to the oxygen as well as one to each of the two hydrogens. At the same time the oxygen atom is also provided with the two bonds its normal valence requires:

Note that all four of the shared electrons in the carbon-oxygen bond are included both in the octet of carbon and in the octet of oxygen. A bond involving two electron pairs is called a double bond.

Occasionally the usual valences of the atoms in a molecule do not tell us what the skeleton structure should be. For example, in carbon monoxide, CO, it is hard to see how one carbon atom (usual valence of 4) can be matched with a single oxygen atom (usual valence of 2). In a case like this, where the valences appear to be incompatible, counting valence electrons usually leads to a structure which satisfies the octet rule. Carbon has 4 valence electrons and oxygen has 6, for a total of 10. We want to arrange these 10 electrons in two octets, but two separate groups of 8 electrons would require 16 electrons. Only by sharing 16 – 10, or 6, electrons (so that those 6 electrons are part of each octet, and, in effect, count twice) can we satisfy the octet rule. This leads to the structure

Here three pairs of electrons are shared between two atoms, and we have a triple bond. Double and triple bonds are not merely devices for helping to fit Lewis diagrams into the octet theory. They have an objective existence, and their presence in a molecule often has a profound effect on how it reacts with other molecules. Triple bonds are invariably shorter than double bonds, which in turn are shorter than single bonds. In

, for instance, the carbon-oxygen distance is 114 pm, in

it is 121 pm, while in both ethyl alcohol and dimethyl ether and methanol it is 142 pm. Below are 3-D Jmol images of carbon monoxide, formaldehyde, and methanol, to compare the difference in bond length with. 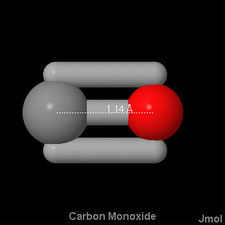 This agrees with the wave-mechanical picture of the chemical bond as being caused by the concentration of electron density between the nuclei. The more pairs of electrons which are shared, the greater this density and the more closely the atoms are pulled together. In line with this, we would also expect multiple bonds to be stronger than single bonds. Indeed, the bond energy of C—O is found experimentally to be 360 kJ mol–1, while that of

triple bond in carbon monoxide turns out to be the strongest known covalent bond.

The formation of double and triple bonds is not as widespread among the atoms of the periodic table as one might expect. At least one of the atoms involved in a multiple bond is almost always C, N, or O, and in most cases both atoms are members of this trio. Other elements complete their octets by forming additional single bonds rather than multiple bonds.

Solution Since hydrogen atoms are univalent, they must certainly all be bonded to carbon atoms, presumably two to each carbon. Each carbon atom thus has the situation

in which two bonds must still be accounted for. By assuming that the two carbon atoms are joined by a double bond, all the valence requirements are satisfied, and we can draw a Lewis structure containing satisfactory octets:

Draw structural formulas for (a) CO2 and SiO2.

double bonds will satisfy the normal valences. The structure is

Looking at the Jmol image for this molecule, the

double bonds have a shorter distance than those seen in formaldehyde, but the are longer than the triple bond in carbon monoxide: b) Silicon also has a normal valence of 4, but it is not an element which readily forms double bonds. Each silicon can form single bonds to four oxygen atoms however,

Now the silicon is satisfied, but each oxygen lacks one electron and has only formed one bond. If each of the oxygens link to another silicon, they will be satisfied, but then the added silicon atoms will have unused valences:

The process of adding oxygen or silicon atoms can continue indefinitely, producing a giant lattice of covalently bonded atoms. In this giant molecule each silicon is bonded to four oxygens and each oxygen to two silicons, and so there are as many oxygen atoms as silicon. The molecular formula could be written (SiO2)n where n is a very large number. A portion of this giant molecule is shown below. A portion of the giant covalent molecule (SiO2)n. The lattice shown would extend indefinitely in all directions in a macroscopic crystal. Each silicon atom (light color) is covalently bonded to four oxygen atoms (dark color). Each oxygen bonds to two silicons. The ratio of silicon to oxygen is 2:4 or 1:2, in accord with the formula.

The difference in the abilities of carbon and silicon atoms to form double bonds has important consequences in the natural environment. Because

double bonds form readily, carbon dioxide consists of individual molecules—there are no “empty spaces” on either the carbon or oxygen atoms where additional electrons may be shared. Hence there is little to hold one carbon dioxide molecule close to another, and at ordinary temperatures the molecules move about independently. On a macroscopic scale this means that carbon dioxide has the properties of a gas. In silicon dioxide, on the other hand, strong covalent bonds link all silicon and oxygen atoms together in a three-dimensional network. At ordinary temperatures the atoms cannot vibrate far from their allotted positions, and silicon dioxide has the macroscopic properties of a solid.

As a gas, carbon dioxide is much freer than silicon dioxide to circulate through the environment. It can be removed from the atmosphere by plants in the photosynthetic process and eventually returned to the air by means of respiration. This is one of the reasons that terrestrial life is based on carbon compounds. If a supply of carbon from atmospheric carbon dioxide were not available, living organisms would be quite different in form and structure from the ones we know on earth.

Science-fiction authors are fond of suggesting, because of the periodic relationship of carbon and silicon, that life on some distant planet might be based on silicon. It is rather hard to imagine, though, the mechanism by which such life forms would obtain silicon from the rocks and soil of their planet’s surface. Certainly they would face major difficulties if the combination of silicon with oxygen to form silicon dioxide were to be used as a source of energy. Imagine breathing out a solid instead of the gaseous carbon dioxide which forms when carbon combines with oxygen during respiration in terrestrial organisms! Macroscopic properties which are determined by microscopic structure and bonding are crucial in even such fundamental activities as living and breathing.