There are a number of cases where the normal valences of the atoms involved do not predict the correct skeleton structure. For example, thionyl chloride, SOCl2, is found experimentally to have both chlorines and the oxygen atom bonded to sulfur:

This exceeds the usual valence of 2 for sulfur, while oxygen has one less bond than we might have expected. Molecules which deviate in this way from the usual valence rules often contain at least one atom (such as S) from the third row or below in the periodic table. One or more oxygen atoms are usually bonded just to that third-row atom instead of linking a pair of other atoms. Usually the atom which occupies the central position in the skeleton is written first in the molecular formula, although sometimes H (which forms only one bond and cannot be the central atom) precedes it. Some examples (with the central atom in italics) are: SOCl2, POCl3, HClO4, SO2Br2, and N2O. (In the last case, one of the two nitrogens occupies the central position.)

In such molecules the deviation from the normal valence occurs because at least one electron-pair bond contains two electrons which were originally associated with the same atom. Such a bond is called a coordinate covalent bond or a dative bond. An example is the bond between sulfur and oxygen in SOCl2:

Both electrons in the S―O bond were originally valence electrons of sulfur. Therefore the sharing of this electron pair adds nothing to the valence shell of sulfur, and sulfur can form one more bond than would be predicted by its normal valence. Neither electron in the coordinate covalent bond was originally associated with oxygen, and a single bond (both electrons) is sufficient to provide an octet when added to oxygen’s six valence electrons. Hence oxygen forms one less bond than expected.

It should be noted that there is nothing to distinguish a coordinate covalent bond from any other covalent bond once a structural formula has been drawn. A pair of electrons is still a pair of electrons no matter where it came from. The distinction is merely one we make when trying to fit electron pairs into octets around each atom. Structural formulas for the other examples of unusual valence we have mentioned are shown below with coordinate covalent bonds indicated in color: 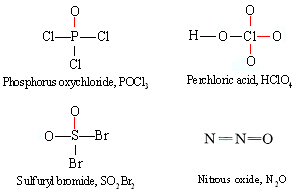 It is good practice to draw out the complete Lewis diagram for each of these molecules, differentiating electrons from different nuclei with different symbols such as × and ●, and satisfy yourself that they obey the octet rule.