The construction of a simple powder diffractometer was first described by Hull in 19171 which was shortly after the discovery of X-rays by Wilhelm Conrad Röntgen in 18952. Diffractometer measures the angles at which X-rays get reflected and thus get the structural information they contains. Nowadays resolution of this technique get significant improvement and it is widely used as a tool to analyze the phase information and solve crystal structures of solid-state materials.

In this section, let us take a look at the theoretical basis of powder X-ray diffraction technique. (e.g. lattice structures and how X-rays interacts with crystal structures)

“Crystals are built up of regular arrangements of atoms in three dimensions; these arrangements can be represented by a repeat unit or motif called the unit cell.”2 In crystallography, all the crystal unit cells can be classied into 230 space groups. Some basic knowledge about crystallography is necessary for a well understanding of powder XRD technique. In crystallography, the basic possible classifications are: 6 crystal families, 7 crystal systems, 5 centering position, 14 Bravais lattices and 32 crystal classes.

Based on the angles and the length of the axes sides, unit cell can be divided into 6 crystal families, which are cubic, tetragonal, hexagonal, orthorhombic, monoclinic and triclinic. As the hexagonal family can have two different appearances, we can divide it into two systems which are trigonal lattice and hexagonal lattice. That is how the 7 crystal systems generate. If forget the shape of lattice and just consider the atoms' positions, we can divide the lattices into primitive lattices and non-primitive ones. A primitive lattice (also defined as simple) is the lattice with the smallest possible atomic coordination number2, e.g.wheneight atoms lie in the eight corners. And all the other lattices are called non-primitive lattice. Based on the three-dimension position of the atoms in the unit cell, we can divided the non-primitive lattice into three types: face centered (F), side centered (C), body centered (I) and based centered(R). 32 crystal classes refer to 32 crystallographic point group classfied by the possible symmetric operations, which are rotation, reflection and inversion. You may wonder why only 32 possible point group. The answer is crystallographic restriction, which means crystal system can only have 5 kinds of rotation axises: 1-fold, 2-fold, 3-fold, 4-fold and 6-fold. To be simplify, only the permissible rotation axises allow unit cells grow uniformly without any openings among them.

Miller indices and reciprocal lattice are essential to understanding the geometry of lattice planes and X-ray diffraction technique, because they are widely used to index the planes and orientations in crystallography and allow data handling in a simple and mathematical method. To assign the Miller indices (h,k,l) to a certain set of parallel planes which are defined as a plane family , first we need to find the first plane next to the plane, passing through the origin. Then we can find the three intersection of this plane on the unit cell vectors, a, b, c. “The Miller indices would be the reciprocals of the fractional intersections.”1 Why we want the reciprocal of fraction instead of the fraction directly? To get the answer, we need get to understand what reciprocal lattice is. Bragg’ s law is the theoretical basis of X-ray diffractometer. Let us consider the crystalline as built up in planes. As shown in the diagram, X-ray beam shines into the planes and is reflected by different planes. The beam reflected by the lower plane will travel an extra distance （shown in Figure 2.2.1 in red）than that reflected by the upper one,which is 2dsinθ. If that distance equals nλ(n is an integer), we will get constructive interference, which corresponds to the bright contrast in diffraction pattern. So the Bragg equation as shown below defines the position of the existence of constructive diffraction at different orders. 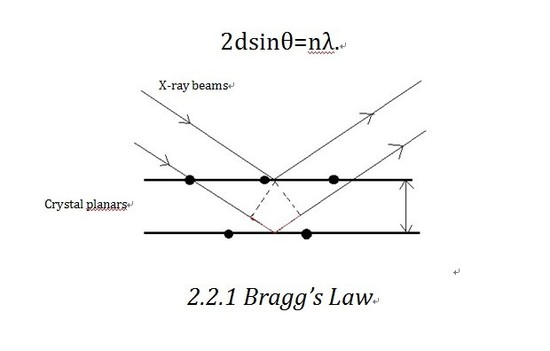 D-spacing, which is the inter plane distance d in Bragg’s equation, is decided by the lattice parameter a, b, c, as shown below.

So after finding out d-spacing from detected Bragg’s angle, we can figure out the lattice parameter which contains vital structural information. Also we can reconstruct the unknown structure by figuring out all the possible d-spacing. Powder XRD can define the phase contained in a mixture on the basis of separating and recognizing characteristic diffraction pattern.

For a fcc crystal, Fhkl=f{1+eπi(h+l)+eπi(k+l)+eπi(h+k)}. When h, k, l are all odd or all even, F=4f. For the other situation, F=0 and thus diffraction intensity will also be zero. Structure factor is important in the structure determination step because it helps understand the Miller indices and intensities of diffraction peaks. The other common rules for reflection to be observed are listed as follows:

The cathode part of X-ray tube generated electrons under electric current. Electrons travel from cathode to anode through a high acceleration voltage, typically 30~150kV. In this process, most of the energy is released as heat and X-ray only account for approximately 1% of total energy. The X-ray tube needs lasing cooling water to protect it from over heat while working. After X rays hit the anode(red part in the schematic), the anode generates characteristic X-rays, which comes from the process of excited electrons falling down to lower electron shell and correspond to the energy difference between electron shells. In Bruker D8 diffractometer, the anode is made of Cu, so the X-ray souce is Cu-Ka1 and Cu-Ka2. K means the electrons falls to K shell from higher shells. α means the excited electrons lies in L shell, one shell higher than K shell. If the excited electron comes from M shell which is two electron shell higher, then what we have is defined as Kβ. The difference between Cu-Ka1 and Cu-Ka2 is that they come from different subshell, Cu-Ka1 corresponds to 2p2/3 to 1s shell while Cu-Ka2 corresponds to 2p1/2 to 1s shell.

In a reflection geometry instrumentation, X-ray tube usually contains a side window made of Be to allow the generated X-rays to emit at the demanding angle. The reason that Be is used as a X-ray window, is that the fluorescence yield (ration between characteristic X ray and Auger emission) of Be is close to zero, so it can make sure the X-ray source is monochromatic and does not contain introduced chracteristic X-rays from other metals.

There are many holder options to holder all kinds of samples and meet people’s requirement. Usually, evenly grinded sample powder is dissolved in organic solvent such as acetone or pressed into a plain on a glass slide to make sure the sampel is flat. The sample holder has a press ring to fix the slide. At low angles, the signal to noise ratio can be relatively larger and we can use a zero background sample holder to avoid that. It is usually made of single crystal silicon.

Photographic film serves as detector in earlier methods, Debye-Scherrer camera and Guinier camera methods2. The film is placed around the sample as a circle and records the diffracted X-ray beams. The positions of diffraction lines correspond to Bragg angle. And Photographic film can record both the reflected and transmitted X-ray beams. Nowadays, people tend to only select the reflected beam and use radiation counter as detector. Compared to film, scintillationcounter can measure diffraction intensities and Bragg angles more accurately. And it is very convenient use computer to analyze data.To prevent the X-ray beam from going though the sample, we need more powder sample.

X-ray diffractometer is most widely used in the phase analysis because compare to other characterization method, XRD gives a fast and reliable measurement(measurement time is determined by the step size, angle range and the number of second per step) and easy sample preperation(well grinded powder). What people do after get their raw data is opening the data in a XRD data handling software (JADE, WinXPOW, ect.) and compare the raw data with the standard pattern in ICDD database. In many cases, the database may not contain the pattern of a specific compound you are working on, then you can easily generate a calculated pattern based on a crystal informtion file or the space group and lattice parameters. The diffraction pattern of a well-prepared sample should be very reliable (all the peaks should match the peaks in the reference pattern) and contains much information. When the sample has impurities, every kinds of substance will generate their own pattern independently and allows us to analysize seperately and help people control and optimize the reactions. Other factor that can influence the pattern may be the X-ray souce, sample crystallinity (smaller crystallinity can broaden the peaks), ect.

XRD technique is also capable for quantitative analysis of mixtures. The XRD data will not give the quantitative imformation because the intensity is not directly related to weight percantage. However, we can make a serie of controlled samples with different weight percentage of the impurity. Then XRD is performed on each of these sample and we can get a linear calibration curve which is the intensity ratio vs. weight percentage. The weight percentage in the sample can be determined based on the curve. If all the atomic and crystalline information are known, we can also conduct qualitative analysis with Rietveld method. A square least approximation method will be applied to modify all the parameters so that the difference between experimental point and the fitted pattern can be decreased to a least amount. During this process, the scale factor can also be determined. Rietveld method is widely used in samples containing more than one impurities.

As shown in Figure 4.1, one Bragg Ring corresponds to a certain Miller plane. With the detected Bragg angle and equation 2.1, we can figure out the lattice parameters. The common method to manage data is direct method, Patterson method and Fourier method2. We can also use the square least approximation method, i.e. Rietveld method to refine the data, to refine the data and it has increased the resolution a lot.