For lots of technical detail on the web, try this link.

Light acts as a wave, so different portions of a light beam appear brighter or dimmer due to the interaction of the electromagnetic field in the waves. Intensity is proportional to the square of the electric field. If

If \(E\) from one wavelet interacts with another wavelet, the phase shift between the two waves modifies the observable intensity,

where \(ϕ\) is the phase shift. When \(ϕ = π/2\) or \(3π/2\) radians, the intensity goes to 0. This is illustrated in the figure below. The upper wave is taken as the reference phase. In the left-hand inset, the second wave is in phase, giving an output with the same phase and summed amplitude. In the middle inset, the second wave lags the first by 1/4 wavelength (π/2 radians, giving \(ϕ = π/4\)), so the sum is reduced in amplitude compared to the first case. In the last inset, the two waves are shifted by half a wavelength (π radians, giving ϕ = π/2), and the summed electric field vanishes (see the flat line?).

Click on a thumbnail image below to see a bigger image for the shifts: A periodically-roughened surface: the diffraction grating Typically, light is directed to a grating either from a great distance or by projection through optics that collimate the light. The result is that (at least to a very good approximation), the incoming light appears to be a plane wave. Thus, when a particular phase (say, the crest) of the wave hits one facet or echellette of a grating, the wavefront has not yet reached the corresponding point on the next echellete. For an incidence angle α, measured from the normal to the plane of the grating, the extra distance or phase shift through which the wave front must propagate to reach the next echellette is d sin α. Once the wave hits an echellete, it scatters in every direction, but it can only be seen where the scattering from the set of echelletes gives constructive interference.

Click on the images below to see a bigger image: 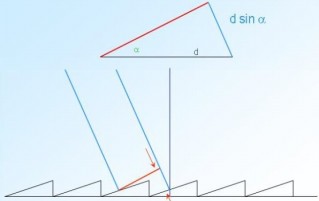 For a wavefront leaving one echellete at some angle β, the distance travelled until catching up with light scattered from an adjacent echellete is d sin β. With reference to the leftmost echellete, the inbound wave LAGS in hitting the next rightmost echellete, while the scattered ray from the leftmost echellete LAGS the light scattered from the next right most echellete. The difference in path from when the wavefront first encounters an echellete until both scattered waves reform a planar front of defined phase is d sin α - d sin β There is no ambiguity in what we mean by "path difference," you can see it from the sketches. But there is a need to define angles in an internally consistent way so that angles can have signs (not to be confused with sines -- reading is easier than hearing!).