Purpose:  The objective of this module is to ensure that the students have a thorough understanding of the functions, components, capabilities and limitations of using mass spectrometry as a detection system.  This will be developed principally through the requirements of doing steroid analysis of urine samples.

By the end of the assignment students will be able to:

In order to obtain any meaningful information from a separation of compounds a detector must be coupled to the separation instrument.  One of the most powerful detectors is a mass spectrometer (MS).  This detector converts compounds into gas phase ions, which are then sorted and quantified on the basis of their mass.  As the analytes eluting from a GC separation are already in the gas phase, the MS can be coupled very easily to the GC.

The MS detector is composed of multiple components in order to effectively analyze the gas phase ions.  This section will guide you through the structure and function of the various components of the MS detector.  In all MS detectors, the final stage of the ion detection process is to quantify the number of ions into an electronic signal.  This is typically done with an electron multiplier that is able to convert the impact of an ion with the detector into an electrical signal.  However, this detector is effectively “dumb”, it can do little more than quantify the number of ions that hit it.  What makes the MS detector so powerful is how it can both make gas phase ions and determine which ones are reaching the detector at a given point in time.

The TOF system is one of many mass selection methods available for MS instruments.  Another common instrument is the quadrupole mass analyzer (often shortened to “quad”).  This mass analyzer uses four parallel cylindrical rods to differentiate between ions of different masses.  By varying the electrical potential (DC), and radio frequency (RF) applied to the cylinders, ions with specific m/z values can be guided through the length of the quadrupole.  Ions of different m/z than the selected value will not have a stable flight path, and will be unable to exit the orifice at the end of the quadrupole.

Though the combination of a separation technique and the molecular weight information from a MS can help differentiate between molecules with identical molecular weights, it still may not be sufficient in all cases.  Certainly the question can arise as to whether or not compounds were properly resolved in the separation stage of the analysis.  This is particularly problematic for steroid analysis, both for health and anti-doping purposes, where differentiating testosterone, epitestosterone, dehydroepiandrosterone, and testrolone (all with a molecular formula of C19H28O2) would be crucial. 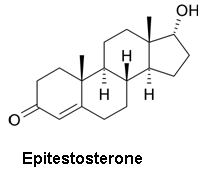 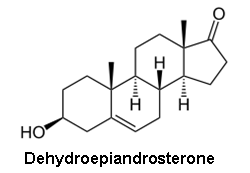 Below is the EI mass spectrum for pure (non-derivatized) testosterone.  Use it, along with the structure for testosterone to answer the following questions.

In question 14 you were asked how you might combine multiple quadrupole mass analyzers in a single instrument.  Due to the manner in which quadrupoles handle the ions, they have a great potential for analyzing the fragmentation patterns of ions.  The most common configuration is three quadrupoles in a row, a “triple quad”.  In this configuration the first and third quadrupoles are used for mass analysis, and the second (middle) quadrupole acts as a collision chamber.  The collision chamber is used to induce further fragmentation of any ions that enter that quadrupole.