The atoms and molecules which compose a volume of liquid or solid are in constant motion with a distribution of energies predicted by the kinetic molecular theory. Depending on the total forces holding them in proximity to each other and their average kinetic energy (as measured by the absolute temperature), there will be some tendency for the most energetic molecules to overcome the forces holding them together and to escape into the gaseous state. Molecules at high temperature with weak intermolecular forces have a greater tendency to do this than molecules with strong intermolecular forces at a lower temperature. The resulting collection of molecules in the gaseous state enter an equilibrium with those remaining in the solid or liquid state. The gaseous molecules are themselves in constant motion and in colliding with the boundaries of the container exert a pressure reflective of their numbers and the absolute temperature. This pressure is called the VAPOR PRESSURE. Owing to differences brought about by intermolecular forces, each pure substance exhibits a characteristic vapor pressure as a function of temperature.

The table below shows the vapor pressure in torr for water and diethyl ether at six temperatures:

The volatility of diethyl ether is evident from a vapor pressure more than 20 times that of water at these temperatures. This difference can be demonstrated by means of a buret clamped upside down in a reservoir of water, several mL of air trapped in the buret above a column of water and a funnel attached to the buret nozzle: The buret valve is opened to allow the water to pass almost completely from the funnel into the buret. Care is taken not to allow air to get trapped in the nozzle of the funnel leading to the buret. Note the water flowing down inside on the left inner wall of the buret in the photo on the left. The trapped bubble of air remains just under the valve thanks to its lower density, but the water is able to flow around it into the water below. 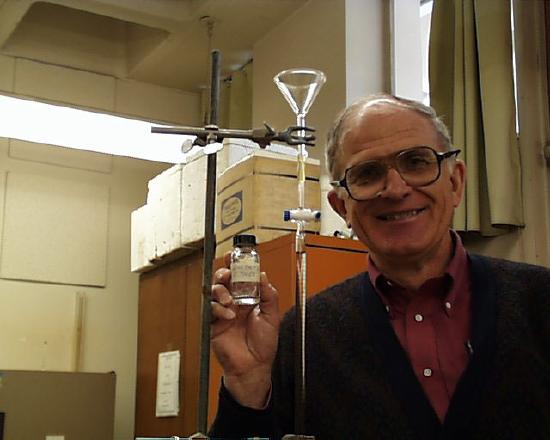 A small volume of diethyl ether is poured into the funnel and the buret valve is opened to allow some of the ether to enter the buret column. For the purpose of more convenient comparisons a second run was carried out in which the starting meniscus was close to 50mL and the level of the water reservoir at 0 mL: Following the admission of the diethyl ether, the meniscus falls to 46.1 mL, substantially increasing the volume of the gaseous phase.