To be able to understand the driving force behind the reactions of nitriles, you must recognize the polarity of this group:

You can therefore expect to see similarities between the behaviour of the nitrile group and the similarly polarized carbonyl group:

The electronic structure of nitriles is very similar to that of an alkyne with the main difference being the presence of a set of lone pair electrons on the nitrogen. Both the carbon and the nitrogen are sp hydridized which leaves them both with two p orbitals which overlap to form the two \(\pi\) bond in the triple bond. The R-C-N bond angle in a nitrile is 180o which gives the functional group a linear shape.

The presence of an electronegative nitrogen causes nitriles to be very polar molecules. Consequently, nitriles tend to have higher boiling points than molecules with a similar size.  Also, the polar nature of nitriles promotes their solubility in water. 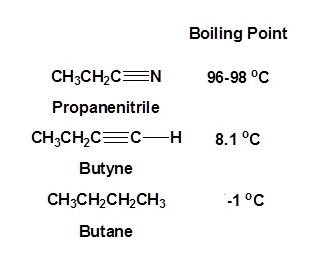 One of the most common occurrences of nitriles is in Nitrile rubber. Nitrile rubber is a synthetic copolymer of acrylonitrile and butadiene. This form of rubber is highly resistant to chemicals and is used to make protective gloves, hoses and seals.  Cyamemazine is an antipsychotic drug primarily used to treat schizophrenia and certain types of anxiety.  Citalopram is an antidepressant primarily used to treat depression, panic disorder, and social phobia.  It is currently among the most prescribed drugs in the United States. Amygdalin is a molecule contained by certain plants to protect themselves against herbivores and insects. Acting as a sort of natural pesticide, amygdalin degrades to release poisonous hydrogen cyanide (HCN) when any plant material is chewed by an insect or animal. Nitriles can be synthesized from the nucleophilic addition of cyanide (-:C≡N) to the electrophilic carbonyl group of aldehydes and ketones to form a cyanohydrin.

Nitriles are formed by an SN2 reaction between primary and secondary alkyl halides and sodium cyanide. Tertiary and aryl halides cannot be used for this reaction.

Formation of a Nitrile from and 1o Amide

Primary amides can be converted to nitriles by dehydration with thionyl chloride (SOCl2) or other dehydrating agents like such as P2O5, or POCl3.

Mechanism for the Formation of a Nitrile from and 1o Amide

For the reaction of primary amides with thionyl chloride, the mechanism begins with the lone pair of the nitrogen atom forming a protonated imine and pushing the pi electrons of the carbonyl to undergo nucleophilic attach sulfur of thionyl chloride. This forms a O-S sigma bond and causes the pi electrons of the thionyl bond (S=O) to be pushed onto the oxygen.  The thionyl bond reforms in concert with the loss of a chloride leaving group (Cl-). The protonated imine is neutralized by any base. The nitrile is produced by an E2-like elimination reaction with a loss of sulfur dioxide (SO2) and another chloride as the leaving groups. 4) E2-like reaction to form a nitrile

Nitriles are analogous to carbonyl groups in that they are both contain pi bonds, are strongly polarized, and contain electrophilic carbons.

The bond polarization of a nitrile can clearly be seen when comparing the electrostatic potential maps of an alkene, an aldehyde, and a nitrile.  In the maps of the aldehyde and nitrile, the electron density in the pi bonds is pulled away from the carbon toward the electronegative oxygen and nitrogen.  This gives the functional group carbons a slight positive charge making them electrophilic.  In the map of the alkene, the electron density is centered on the carbon making the pi bond non-polar and the carbons not electrophilic. One of the more useful reaction involving nitriles is their hydrolysis to form carboxylic acids. This reaction occurs in either acidc or basic aqueous solutions with slight differences in each mechanism.  In the case of acid catalysis, the nitrile becomes protonated. Protonation increases the electrophilicity of the nitrile so that it will accept water, a poor nucleophile. With base catalyzed hydrolysis, the strongly nucleophilic hydroxide anion is capable of directl addition to the carbon-nitrogen triple bond.  During both mechanisms an amide intermediate is formed which usually is not isolated.

The mechanism begins with the protonation of the nitrile to promote the addition of the weakly nucleophilic water molecule to the C-N triple bond. Once water has reacted with the nitrile carbon, a proton transfer and resonance occur to produce a protonated amide. Water acts as a weak base, deprotonating the carbonyl to form an amide and regenerating the hydronium catalyst. Further hydrolysis converts the amide to the carboxylic acid.  The nitrile nitrogen is eventually removed as a leaving group and eventually forms ammonium (NH4+)

1) Protonation of the nitrile

4) Resonance to form a protonated amide

5) Deprotonation to form an amide

6) Further hydrolysis of the amide forms a carboxylic acid. This mechanism can be found in Section 21.7

Base Catalyzed Hydrolysis of Nitriles

Base catalyzed hydrolysis starts with the nucleophilic addition of a hydroxide ion to the C-N triple bond to form an imine anion.  Subsequent protonation by water forms an amide tautomer, hydroxyimine, and regenerates the hydroxide catalyst. Tautomerization of the hydroximine forms an amide which undergo further base catalyzed hydrolysis to form a carboxylic acid. During hydrolysis of the amide, nitrogen from the original nitrile is removed as a leaving group and eventually forms ammonium (NH4+)

2) Protonation by water to form a hydroxyimine and hydroxide

4) Further hydrolysis of the amide forms a carboxylic acid. This mechanism can be found in Section 21.7

The Reduction Nitriles to 1° Amines by Reaction with LiAlH4

The reduction of nitriles with lithium aluminum hydride LiAlH4 is an excellent method for the synthesis of primary amines. This reaction occurs via two nucleophilic additions of a hydride to the electrophilic carbon in the nitrile.  Subsequent protonations with an aqueous work-up leads to the primary amine.

Predicting the Product of a Hydride Reduction

During this reaction the hydride nucleophile reacts with the electrophilic carbon in the nitrile to form an imine anion. The imine ion is stabilized through formation of an anionic Lewis acid-base aluminum complex.  The complex is vital for the continuation of the reaction because it shifts the negative charge from the nitrogen to the alumnium allowing for the imine carbon to remain electrophilic.  Because the imine-aluminum complex still contains a pi bond and an electropilic carbon, it can undergo a second nucleophilic addition of a hydride to form a dianion. The dianion is also stabilized through the formation of an anionic Lewis acid-base aluminum complex. During the aqueous work-up, the dianion is protonated by water to form a primary amine.

1) Nucleophilic attack by a hydride 2) Second nucleophilic attack by a hydride

3) Protonation by addition of water to give a primary amine

The Conversion of Nitriles to Aldehydes by Reaction with DIBALH

The use of DIBALH as a hydride source offers an efficient method for the synthesis of aldehydes.  DIBALH only contains on hydride so the addition of one equivalent to a nitrile at low temperature (-780C) allows for the conversion to an aldehyde.

Predicting the Product of a Reaction with DIBALH

The mechanism starts the formation of a Lewis acid-base complex which increases the electrophilic character of the nitrile's carbon. The nucleophilic addition of a hydride forms an imine anion which is also stabilized through formation of a Lewis acid-base aluminum complex.  Unlike the reduction with LiAlH4, DIBALH only has a single hydride so a second nucleophlic addition to the imine anion does not occur.  Subsequently, the imine anion undergoes hydrolyses during acidic aqueous work-up to from an aldehyde. The mechanism of imine anion hydrolysis is the reverse of an imine formation previously discussed.

This picture is from an outside source

Predicting the Product of a Reaction with an Organometalic

The mechanism begins with the nucleophilic Grignard reagent reacting with the electrophilic carbon of the nitrile to form a salt of the imine anion. The imine salt is protonated to form and imine which subsequenlty protonated to form a positively charged iminium ion.  After nucleophilic attack by water and a proton transfer, the nitrogen from the nitrile is removed as a leafing group in the from of ammonia (NH3).  This step forms a protonated ketone called a ketonium ion which is subsequently deprotonated by ammonia to the neutral ketone and ammonium (NH4+).

2) Protonation to form an imine

3) Protonation to form an iminium ion 7) Deprotonation to form a ketone

Planning the Synthesis of a Ketone from a Nitrile

Because a C-C bond is formed, the reaction of a organometalic reagent with nitrile is an effect method for the synthesis of ketones.  Also, asymetrical ketones offer the possibility of two separate synthesis routes.

Break a C-C bond between the carbon in the carbonyl and an adjacent carbon.  The fragment with the C=O becomes the nitrile starting material. The other fragment becomes either a Grignard or an organolithium reagent.

Plan a synthesis of the following molecule using the reaction of a organometallic reagent and a nitrile.

There are two possible pathways to synthesize this molecule.

1) Please show how the following compounds could be prepared from a nitrile:

2) Please show how the following transformations could be preformed: