We have a definition of work already set: 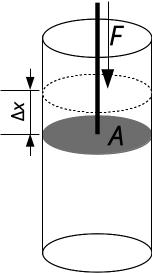 This definition sets a sign convention for work, as we’ve said before; forces in the same direction as an object’s displacement result in positive work done, and forces in the opposite direction as the displacement yield negative work; we can characterize positive work as work done on a system and negative work as work done by a system in this way. Like heat, work is a process energy; no system possesses work, but work is performed on a system.

Consider the system to be a gas in a closed container, as shown above and at right; the force is applied to the gas by a piston of area A, which is displaced a distance of Δx. Knowing the area of the piston allows us to do two things: we can recognize pressure in the force per unit area, and we can also recognize the change of volume in the system from the product of the area and the displacement. This has the effect of multiplying the work relation by 1:

The pressure here is that which is applied from the outside of the gas; the positive work results from the motion of the piston in a way that decreases the volume of the gas, which introduces a negative sign to the work relation. To do work on a gas, you must decrease its volume; to have work done by a gas, the volume of the gas must increase.

The mathematics here is very straightforward as long as the pressure applied externally to the gas is constant. Realistically, that’s not going to be the case; usually, some kind of increase in pressure is going to be necessary to start the piston moving, and if the piston moves rapidly that will require a pressure that constantly changes. Even studying the ideal gas law solved for pressure (P=nRT / V) provides a model of the number of different ways that pressure can change as a function of the other terms of the variables of state.

Then what happens is integration - adding up the very small changes over the range of the transition:

The quantity δw is what is known as an imperfect differential. You can’t integrate something from initial-work to final-work when work isn’t a property of state, merely a property of a process. You can add up the individual differential processes that lead to the whole. So an integral that looked like “w δw” will never be performed; integrating δw will add up to the total work done:

dV, however, is a proper differential and can be integrated over traditionally. If P is a constant (that is, if the process of changing the volume of the gas is isobaric), dictated by the external pressure, P can be simply removed from the integral in order to regenerate the relationship we had before:

This isn't all that interesting.

But we can also use this opportunity to consider what it looks like when moles and temperature are held constant - that is, the container is closed and the process of changing the volume is isothermal. In that case, we can replace P with a term that’s solved out of the ideal gas law:

(There's an implied assumption in this substitution - we are asserting that the external pressure applied as the volume changes is equivalent to the pressure inside the container. This should make sense on the surface - if we think about this change of volume as a compression, then the pressure required to continue the compression is going to increase as the volume of the gas gets smaller. But this actually demands a more subtle implication to be accurate as a integration - that the change in volume is slow, gradual, and reversible. Practical attempts to make isothermal changes in volume are not reversible. We won't bother ourselves too much with this distinction right now - but we will have to think about it later.)

This integration isn't as direct as it would be if the pressure were constant; it requires the taking of an antiderivative, in this case the antiderivative of 1/V:

At any point in this process, we could have chosen to get rid of the negative sign by swapping the limits on the integral, so this is an equivalent expression:

This might seem backwards. But it’s more satisfying to consider the signs in terms of how they impact the energy of the system as a whole.

The first law of thermodynamics: the two ways to change the internal energy of a system are first through the release or absorption of heat, and second through the performing of work, either on the system or by the system.

We’re making important assertions with these terms of our sign conventions. Strictly speaking, it is possible for a system to absorb or release heat without changing temperature; consider a phase change, for example. However, for gas systems, we can assert with confidence that if the temperature does not change, there’s been no heat absorbed or released, and any amount of internal energy change comes from work done. And we can also assert that if the volume of a system does not change, no work is done on or by the system, and any internal energy change comes from heat.

This will be critically important as we build the key definitions that surround our measurement of heat.